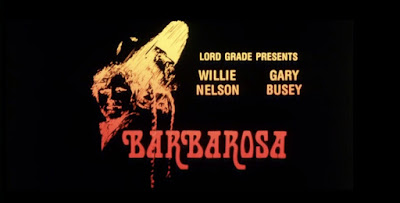 Imagine, if you will, Willie Nelson as your mentor. Think of the life lessons you could learn from a man who has seen it all. A man, mind you, who is perpetually stoned and chill. He wouldn't yell. He wouldn't degrade. Sure, he'd shoot straight from the hip, but it would come from a place of love. What an experience that would be! Peaceful, right? Now imagine you're Gary Busey...

In Barbarosa, Willie is the titular character and mentor to Busey's Karl Westover, an on-the-lam farmboy and simpleton. Like Karl, Barbarosa is also on the run for blowing off the leg of his father-in-law and killing several others on his wedding night to the now-one-legged-man's daughter. Not unlike his mentor, Karl is running away after accidentally killing one of the sons of a neighboring family in their little farm community. We first meet the pair after Karl's pursuers open fire on him, killing Barbarosa's current and now-deceased mentee. Barbarosa moseys up on his horse and says, “Damn fool. I can’t teach you people anything.” Willie is sporting his signature braided pigtails and a sombrero. Busey, on the other hand, is funny Busey in this case, playing his character as green as green gets, jumpy and clumsy, all the while wearing a floppy prospector hat. 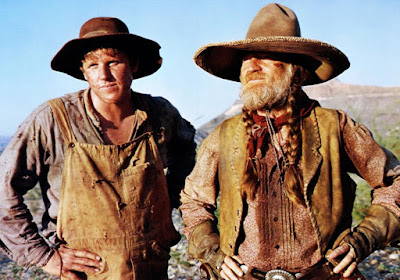 Filmed in Big Bend National Park in Texas, the beautiful photography shows just how dry, rocky, and rugged this land really is. This environment is a perfect setting for Barbarosa and the legend he's created for himself. The film opens with the patriarch of a family searching for the right person to act as assassin to kill the man who shot off his leg and bring back his “cojones.” Every time the name Barbarosa is mentioned, it works its way through gathered crowds in worried whispers, striking fear into any common soul. In reality, Willie is playing Barbarosa pretty close to how I imagine Willie Nelson really is. He's an outlaw (“I get out here once or twice a year; do a little stealin'.”) with scruples (“I don't kill for amusement; man or rabbit.”) And by the end of the movie we learn that the legend of Barbarosa is bigger than the man.

Willie Nelson isn't an actor first, obviously. Up to this point he'd only appeared in an episode of The Rockford Files and three movies (The Electric Horseman, Honeysuckle Rose, and Thief). For a non-actor, I appreciate the heart that comes through Willie's performance. He doesn't hold back (“You been shit outta luck ever since you was born;” after learning Karl's full name), he's not afraid of anything (walking right past the assassin holding him at gunpoint), and he just wants to be loved and accepted (“All I ever wanted was to be a part of this family.”). Barbarosa, of course, isn't his real name, which we never learn. The term “barbarossa” literally means red beard. The night Barbarosa shot off his father-in-law's leg, his beard was covered in blood, instantly creating the legend. The man Barbarosa ran with the legend and Willie plays it perfectly; almost like a poor man's El Topo. 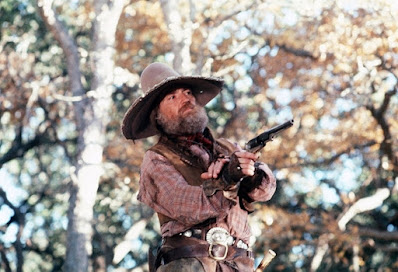 Like his mentor, Karl always opts for the non-violent way to do things. During his first stick-up, he realizes the old couple he's robbing only has a few pesos and, to Barbarosa's chagrin, lets the couple go. When he enters a brothel full of toothless women, drunk men, and mangy dogs he collapses in a chair, yearning for a drink of anything wet, he's approached by two prostitutes. He wants no part of them or the gambling happening in the bar, but he's pressed until Barbarosa sticks the joint up. Busey plays Karl like a character we don't typically see in westerns. I enjoy Busey as an actor, but really love him when he's given a comedic role, and here it seems he's in his element. These are two characters – and two actors, for that matter – that work splendidly in concert. 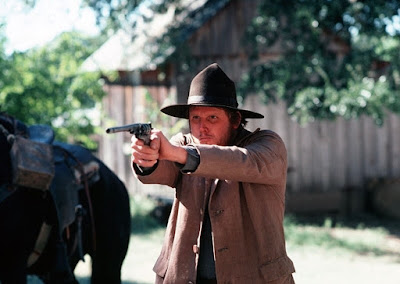 Modern westerns hit a little differently than the American westerns of Howard Hawks and John Ford or the spaghetti westerns of Sergio Leone or Sergio Corbucci. Maybe it's because I was alive when these period pieces were made and it's strange seeing “modern” actors portraying rough characters living in rough landscapes. One thing proves true, though: if you can convince the viewer that you really are that rough character living in that rough landscape, then you've done 90% of the work. Willie Nelson, Gary Busey, and the rest of the wonderful cast of Barbarosa will convince you these characters are real and worth caring about.
Posted by Patrick Bromley at 12:00 PM