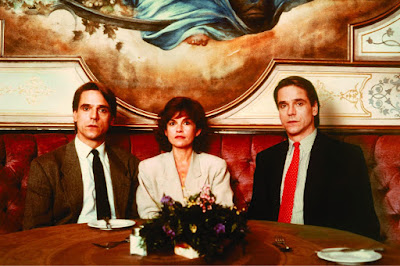 The review duo who eat handfuls of birthday cake and cry when there’s no ice cream.

Adam: Our Hundos series - celebrating the 100th highest grossing film of a given year - continues with 1988’s edgy horror drama Dead Ringers, directed by David Cronenberg and starring Jeremy Irons in a dual role as identical twin gynecologists. Irons plays Elliot and Beverly Mantle, both brilliant men in their field but each with their own dark side. Elliot is a conniving, unethical playboy-type who revels in being enabled by his status, while his brother Beverly is equally talented yet meek, guilt-ridden, and prone to dangerous outbursts. The brothers share women who unknowingly go to bed with both men thinking they are in a relationship with mainly Elliot. The woman of this film’s focus is an actress named Claire (Genevieve Bujold), who starts out by using Elliot for access to prescription drugs, discovers the brothers’ conquest of her, and rebukes them but then later falls in love with Beverly, who himself is infatuated with Claire. Things go very poorly from that point on, complete with medieval medical instruments, drug dependency (prescription and otherwise), and the two brothers circling the drain of madness.

I watched Dead Ringers for the first time a couple of years ago for Scary Movie Month after picking up the Scream Factory Blu-ray. My initial impression of the movie was that it was just as hard to watch as I expected it to be but that it was also surprisingly sad. The movie made me feel really bad during and after the viewing. Like a “Don’t talk to me for two hours while I stare out the window” kind of moodiness. I honestly dreaded this second viewing for a few days before finally pressing play again. I’m glad I did. I think Dead Ringers is a terrific movie despite my initial impressions still being very much true. This movie is sad. It’s a tragedy and that’s even more impressive considering that Cronenberg from the very beginning establishes that the Mantle twins are questionable people at best, putting science and their perversions over the well-being of others. Irons is unbelievably good in both roles (it’s always easy to tell them apart thanks to his performance details, which is all the more impressive because they each have full arcs) and Howard Shore’s score gives the film’s tone a foundation of both dread and unwavering despair. You feel it in the pit of your stomach. Dead Ringers reminded me of one of my favorite horror movies (May) on this viewing where the lead characters are doom-bound and all the audience can do is sit there, wait, and try to course correct an outcome in their minds that the filmmaker never intends to happen. There’s just enough humanity in the Mantle twins that you want them to find it, but this isn’t that story; it’s just my wishful thinking.

What did you think of the movie, Rob? Is the end of the movie how Reserved Seating will also wrap up? 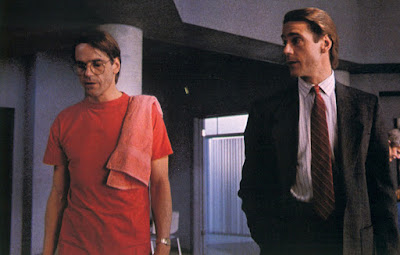 Rob: My hope would be that we get so distracted by the cake that all our other troubles slip away. That’s usually how it goes for me. Anyway. I’m pretty sure this was my first viewing of Dead Ringers, and I completely understand what you mean when you say it’s the kind of sad that just wears you out. It’s like watching a trainwreck in slow motion: You’re fully aware of what’s happening, but there’s absolutely nothing you can do to stop it. I had to go for a walk and listen to Folklore after I watched this one. It was bad. It’s especially interesting as a follow-up to The Fly in that, despite the aesthetic differences, they both focus on the same kinds of corruptive obsession. I imagine there’s a bit of autobiography there, since writer/directors have to be masters of their creative environments and can so often lose their minds in the process.

I want to start by remarking on Jeremy Irons’ performance. I know thousands of words have been written on Dead Ringers by people far more qualified than me, but there is something truly special about the way Irons differentiates between the two characters. There are times when a scene will begin without telling us which brother we’re watching, but it doesn’t take long for us to figure it out just through their posture and affect. On top of that, when you consider the sheer amount of screentime Irons has to fill in both roles (at least one of him is in nearly every scene), we can really start to appreciate the scale of that undertaking. It’s the kind of performance that, even just as a viewer, makes you fully aware of how your entire body moves and looks and feels. See? Cronenberg wasn’t even going for gross-out here, and he still managed to make me uncomfortable in my own skin!

The movie also threads such an interesting needle when it comes to audience empathy. It keeps us at a remove from its characters in that ice-cold ‘80s thriller way, but its themes are heavily drawn from very human experiences: the interconnectivity of siblings, the relationship between physicality and intimacy, and the perils of ego. I found that my concern for the mostly-irredeemable characters kind of snuck up on me. I also appreciate that the twins are allowed to tear themselves apart without the Genevieve Bujold character becoming a kind of femme fatale on which they could blame that spiral. She’s not quite Geena Davis in The Fly, either, but she’s definitely dealing with her love for this unstable man (men?) in a very vulnerable way. What did you think of Bujold’s performance? 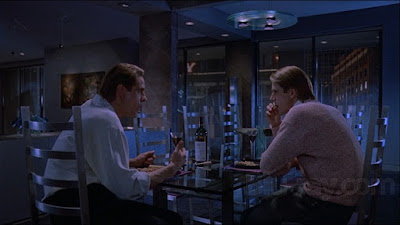 Adam: She’s very good, and the way she plays her indifferent resignation to her own flaws is interesting. I couldn’t get out of my head how much she looks like Ally Sheedy. As the movie progresses, I think her character works better as a motivation or an idea than as a person of her own, but it's no fault of Bujold or really Cronenberg for that matter. It’s just the interpersonal dynamic between both Mantle brothers is so interesting that it becomes the diamond and the rest is the setting.

I want to get back to the subject of twins, because there’s a couple of things I always think about when I’m watching Dead Ringers. The first is a personal anecdote: I’ve been friends with identical twin brothers since high school and I’ll never forget how one of them told me he could feel when his brother was upset, which is even more remarkable because at the time they lived in different states. That comment has always stuck with me and gave me (in a weird way) a window to feel Dead Ringers on a deeper level than I otherwise would have. The other is the story Beverly and Elliot recount about the conjoined twins (Chang and Eng), which is just remarkably sad in its own right and the way Beverly tells it makes for this transference of sympathy from the real-life twins to these two fictional brothers. I forget where I was (it was either The Museum of the Weird in Austin or Ripley’s Believe It or Not in Los Angeles) but I saw a display about Chang and Eng and it stopped me in my tracks. Now I can’t watch Dead Ringers or read about Chang and Eng without one enhancing the other. P.S. I highly recommend taking the walking tour in The Museum of the Weird. They have (or at least had) one of the gargoyle puppets from Tales from the Darkside: The Movie on display. I asked if I could buy it (I was in over my head), but the guy said it was so old and tattered that it probably wouldn’t survive the shipping. The tour ended with a performer hammering nails up his nose. I was the only person in the audience, so I was convinced I was in a Captain Spaulding web. 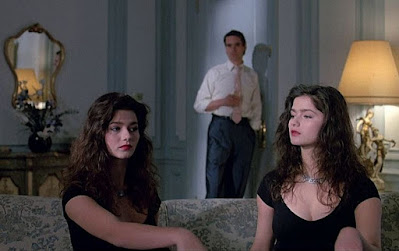 Rob: I’m not really a spiritual or religious person, but sometimes it’s hard to deny that there are forces at play beyond our understanding. That “twin sympathy” thing is definitely one of them. Again, another great thing about Irons’ performance is how both brothers become more and more similar until they essentially inhabit the same soul. It’s a really interesting biological co-dependency that Cronenberg knows better than to over-explain. It’s so much more effective just to let us sit in it.

Adam: What are some of your favorite Cronenberg movies? He’s a director I’ve always “got” and enjoy even if I weirdly take him for granted among his genre contemporaries. My top five are The Fly (1986), Dead Ringers, A History of Violence, The Dead Zone and Eastern Promises.

Rob: I need to sit down and finish my unseen Cronenbergs at some point, but he’s enough of a spiritual cousin to David Lynch that I always enjoy his work. I love The Fly, The Dead Zone, Crash, and Videodrome. I really like Scanners, The Brood, and Naked Lunch. I haven’t seen his entire filmography, but his name is certainly enough to get me interested.

Our Pixar series will return next week with 2009’s Up, which I haven’t seen in full since the theater. Until next time…