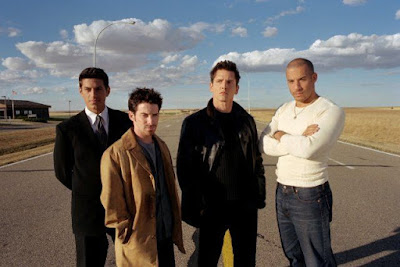 • Best Scene/Moment: There’s an extended bar scene in the middle of the movie where Vin Diesel (who has a giant Star of David tattoo on his arm) beats the crap out of Kevin Gage after delivering a tough guy monologue. It feels like a scene made just for me. 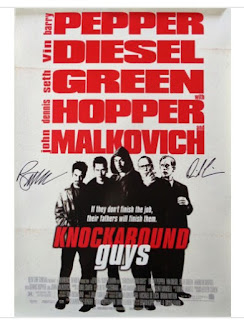 • Best Merch: An “Autographed – The Knockaround Guys Movie Poster for $150!" The autographs are of the film’s co-directors Brian Koppelman and David Levien. This is perfect for framing and hanging up in your college dorm room. I like how the seller on eBay states that the item doesn’t have a certificate of authenticity, so they’ll make one up for your own piece of mind. Thanks?

• Director Check: Knockaround Guys was co-directed by Brian Koppelman and David Levien. Koppelman was making his feature directorial debut (also writing and producing) after his writing debut on 1998’s Rounders. He went on to direct 2009’s Solitary Man starring Michael Douglas, a movie I own on DVD (because of a Blockbuster Video liquidation sale) but have never watched. Koppelman has some impressive writing credits including Runaway Jury, Walking Tall, Ocean’s Thirteen, and The Girlfriend Experience. David Levien has a virtually identical resume. That’s neat. I didn’t even know about this co-directing/writing duo before writing this column. I like their work!

• Year 2001 Movies to Trailer Before It: 3000 Miles to Graceland, Exit Wounds, The Fast and the Furious 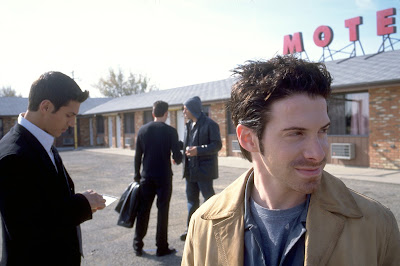 • Only in 2001: Peak coolness Vin Diesel. Don’t get me wrong, I still love modern day Diesel, but he was such an exciting actor pre-xXx.

• Scene Stealer (tie): A great low-key menacing Tom Noonan performance and whatever John Malkovich is doing. I love how he adopted an awful Italian (?) accent to keep himself amused. Knowing that this is from the same team that brought us Rounders, this makes perfect sense. I’m glad Koppelman and Levien just let Malkovich have fun.

• I Don’t Miss: Needing to think Seth Green was cool because the studio told me he was.

• What I Thought in 2001: This is a bit of cheat because Knockaround Guys premiered in 2001 but was delayed to 2002 for its theatrical run. I didn’t see it for the first time until a couple of years ago.

• What I Think in 2021: Knockaround Guys rules. I had heard this was bad for many years and was very pleasantly surprised when I caught up with it a little while back. My re-watch confirmed these feelings. It’s a small, entertaining, macho crime thriller with fun supporting performances (Diesel, Noonan, Malkovich) and a pulpy sensibility. If you enjoy movies like Reindeer Games or The Ice Harvest, I would give Knockaround Guys a chance. It’s a solid 3rd movie on a DVD 4-pack.
Posted by Patrick Bromley at 12:00 PM