I’m guessing my readers are well-versed in the classics of this particular genre— Your Godfathers, your Scarfaces, your Untouchableses. Here are some lesser-known, dynamite gangster flicks. Pow! Pow! Pow!

Terry, my best friend in high school, was obsessed with gangsters, both real and cinematic. He read every book of gangster lore he could get his hands on and always looked out for gangster films on local TV. I vividly remember Terry arriving at school one morning bleary eyed because he had stayed up to see Roger Corman’s 1967 film, The Saint Valentine’s Day Massacre, on WGN the previous night. It seems back then that WGN only showed that particular gem at 2:00 in the morning.

Terry was always telling me stories about “local heroes” Al “Scarface” Capone, Jake "Greasy Thumb" Guzik, Charlie “Trigger Happy” Fischetti, Dion “Local Flower Shop Owner” O’Banion, and “Big Jim” Colosimo. It was his hobby. Our senior year, he convinced our friend George and me to dress like gangsters with him on Saint Valentine’s Day. We were rewarded with a two-page spread in our senior yearbook. Terry’s love of mobsters was my introduction to this reliable film genre. Is there anything more fun than a gangster film? I think not.

If you would like to travel a little far afield today for Junesploitation, try these sleeper gangster hits. Get it? Hits? Hahahahaha #NotAllItalians 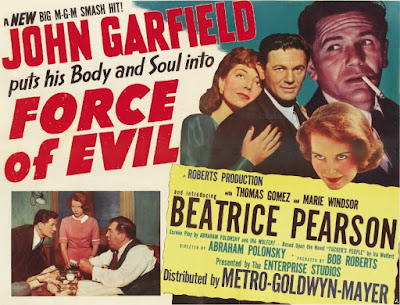 1. Force of Evil (1948) One of my favorite film noirs and a big influence on Martin Scorsese when he was making Raging Bull. This story of two brothers caught up in the New York City rackets contains one of John Garfield’s best performances, but I think Thomas Gomez gives the performance of the film. This film’s use of real NYC locations has never been equaled.

2. Dick Tracy (1990) We tend to think of this as a children’s film or a summer blockbuster or a Warren Beatty movie, but it is, at its heart, a gangster film. Al Pacino gives one of his most... interesting... performances as Big Boy Caprice. Maybe Beatty should have cast himself as Mumbles. 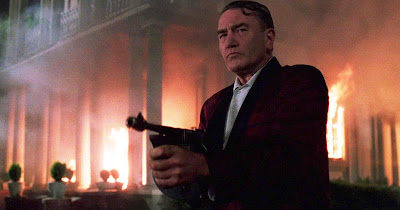 3. Miller’s Crossing (1990) Probably the most unsung film in the Coen Brothers’ oeuvre is also one of their best. Their sense of genre has never been sharper, nor their ear for colloquial dialogue. The scene where Albert Finny defends his home from hitmen is one of the many reasons we all love the movies.

4. Infernal Affairs (2002) The Hong Kong gangster film that inspired Scorsese’s The Departed is twisty, violent fun. I still remember taking my son and his friends to see this at the Music Box Theater when it was first released... and it just knocked the shit out of them. 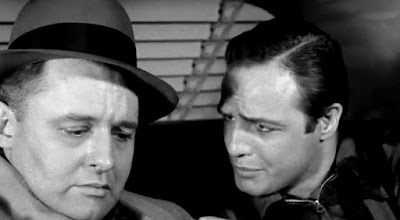 5. On the Waterfront (1954) Again, we think of this as a classic film or an Elia Kazan film or part of the cult of Marlon Brando and method acting, but it is a gangster film at its heart and one of the best of the 1950s. Brando’s famous scene with Rod Steiger in the backseat of the car has rarely been equaled; I’m sure it has been performed in hundreds of acting classes ever since. (Ask me any time—I will perform it for you at the drop of a hat! “Remember that night at the Garden? You came down, you said, ‘Kid, it ain’t your night; we’re going for the prize on Wilson. NOT my night?’”) In keeping with one of my favorite themes of American Gangster films (and a theme this film shares with Force of Evil) On the Waterfront darkly hints that there are levels of corruption far above small-time waterfront boss Johnny Friendly. It implies a world of trouble when the televised dock corruption hearings get so much publicity that Friendly’s higher ups will “no longer take his calls.”

6. The Killing (1956) Ever wonder what a Stanley Kubrick film noir would look like? Here it is. 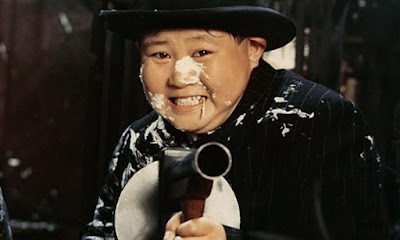 7. Bugsy Malone (1976) Something a little lighter, and what was, for a time, a very difficult film to see. No more—take delight in children dressed as gangsters, Scott Baio years before Charles in Charge and the 2016 Republican National Convention, Jodie Foster as a pre-teen femme fatale, and splurge guns that shoot gobs of whipped cream. This film also features fun songs by Paul Williams because... did I mention it’s a musical?

8. Massacre Gun (1967) & Retaliation (1968) Two of many Nikkatsu crime films starring the great Joe Shishido, these films lead the march to more mature themes, more explicit violence, and more nudity in commercial movies far beyond what American films dared in the 1960s. They are also terrific, compact gangster films with moral complications and a stunning visual style.

9. The Long Good Friday (1980), Lock, Stock, & Two Smoking Barrels (1998), and In Bruges (2008) For those who want their gangster thrills more British, may I suggest this porridge of Anglo-Saxon and organized crime? 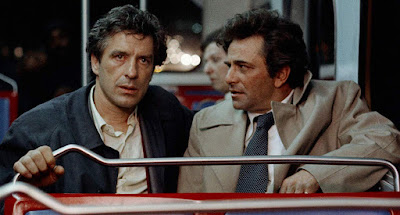 10. Mikey & Nicky (1976) Because of production delays, Paramount took this film away from writer/director Elaine May and refused her right of final cut. Reportedly, she shot more film for this project than was shot for Gone with the Wind. Because of the improvisatory styles of stars John Cassavetes and Peter Falk, May would just leave three cameras running at all times. According to David Blum, writing in New York magazine, “At one point, Cassavetes and Falk had both left the set and the cameras remained rolling for several minutes. A new camera operator said, ‘Cut!’ only to be immediately rebuked by May for usurping what is traditionally a director's command. He protested that the two actors had left the set. ‘Yes,’ replied May, ‘but they might come back.’”

Ten years later, a May-approved cut of the film screened at the Museum of Modern Art and that print was the basis for the 2019 Criterion Collection Blu-ray. Did I mention that Falk and Cassavetes play low-level gangsters?

On a related note, one of my favorite essays on gangster films, “The Lure of Irresponsibility” by Robin Wood can be accessed online. I first read it in college and it just knocked my socks off. This began life as a chapter in Wood’s monograph on the films of Howard Hawks. Interestingly enough, Wood groups Hawks’s Scarface with the comedies. You can read it here.
Posted by Patrick Bromley at 5:00 AM