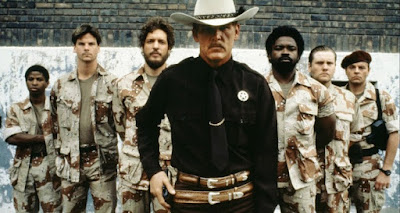 10 things about a Carolco Pictures selection that could work for '80s Action, Westerns, Revenge, Cops, and Free Space Days.

1. Powers Boothe is the main villain of the film, which the movie announces early by showing him crushing a scorpion in his bare hand! This guy doesn’t give a f**k. Powers Boothe (RIP) was one of the greatest character actors ever. I’m so happy whenever he shows up in a movie, especially a Walter Hill joint like this or Southern Comfort. Plus, he looks like a badass wearing an all-white suit and cowboy hat in Extreme Prejudice.

2. Speaking of Walter Hill, Extreme Prejudice marks my 10th seen of his films. Since ranking is fun, I would put it at #6 ahead of Last Man Standing, Another 48 Hrs., Bullet to the Head and Undisputed and after 48 Hrs., Southern Comfort, Trespass, Streets of Fire and The Warriors. Which ones should I watch next? 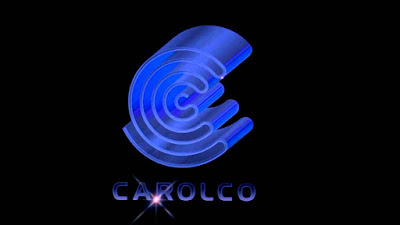 3. I’m not always the biggest Nick Nolte fan but he’s awesome in this -- just a moral, angry protagonist that’s easy to root for. I like the character detail that he refuses to drink with people he doesn’t like. Plus, he has great hair. I wish I had Nick Nolte’s hair game.

4. One of the supporting players in the film’s deep cast is William Forsythe and he’s very William Forsythey in this movie. That man could be his own verb. Like if I said “Dave William Forsythed his way through the grocery store,” you would know it meant he ate a bag of chips before paying for them and when someone gave him a look he was all “You got a problem, lady?” 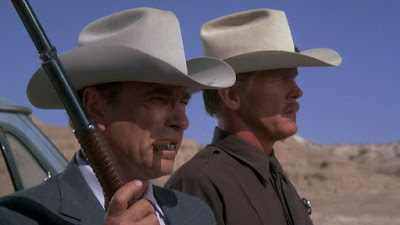 6. Between Walter Hill, Nick Nolte and John Milius’s (who has a story credit) involvement, Extreme Prejudice intimidates me even on paper. I can’t imagine being on this set. I would have been so easily over-macho’d.

7. If you enjoy hot and sweaty movies, then boy is this the film for you.

8. The final action sequence, where all our character converge for a big gunfight, is spectacular. If you were like me and felt the movie was a bit scattered in the early going, this finale more than makes up for any quibbles. 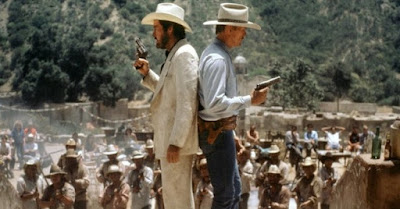 9. You should be aware that there doesn’t seem to be a quality HD transfer of the movie readily available. Patrick has written in the past that the Artisan DVD isn’t great, and I can vouch that the copy you can buy off Amazon streaming is in SD and looks like a VHS tape. It’s too bad, because this movie would probably look great given a proper restoration.

10. The movie opens with what might be my favorite Carolco Pictures logo (with fanfare!). Check it out for 13 seconds of Junesploitation bliss.
See you next time when we gather back around the campfire to talk about another Carolco release!
Posted by Patrick Bromley at 12:00 PM