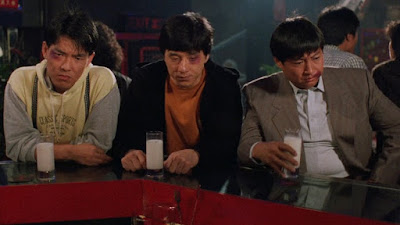 Spectacular action all the way; all for one, and kung fu for all!

The Premise in 30 words, for the 30 days of Junesploitation

Jackie Chan is a hotshot lawyer who knows kung fu and is inexplicably thirsty for love. Lots of dates, and eventually the bad guys, are foiled. Sammo Hung isn’t fat.

PLAYING AGAINST TYPE - I am definitely not here to tell Jackie Chan what he can and cannot do, but I’m not sure if I can totally buy him playing a brash, amoral lawyer, let alone a brash, amoral lawyer who just happens to be really good at kung fu. Apparently, Hong Kong audiences weren’t sure if they could handle Sammo Hung as a cynical rogue instead of a timid dimwit, or Yuen Biao as a mentally unhinged chaos agent instead of an underdog scamp, either, because the movie underperformed in the box office. Reacting to a previous established trope? Totally Junesploitation. 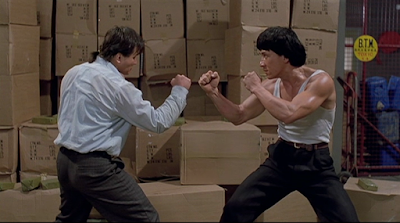 I’VE SEEN YOU BEFORE - This movie was right in the sweet spot of Jackie Chan producing action martial arts stories placed in modern settings, and you get the full platter of Hong Kong action professionals here. Aside from the three leads, there is Wah Yuen (Kung Fu Hustle), Billy Chow (Fist of Legend), and Benny “the Jet” Urquidez, who plays the climactic villain in this and so many other films. I’m not always the guy that looks backward to say that what has come before is better, but I don’t think you’ll see a cast so loaded with action talent as the ones from this era (era).

THE THREE DRAGONS - The “dragons” in the title refer to Chan, Hung, and Biao, who all started together in a Peking Opera school in Hong Kong, which gave them the acrobatics and weapons training that led to careers as actors and stunt doubles in the burgeoning HK movie industry. Chan, Hung, and Biao appear in three movies together (Project A and Wheels on Meals are the others), and their chemistry and timing is so easy and comfortable. They don’t really overshadow each other too much here; the movie comes alive not when they’re fighting the bad guys, but when they’re acting and goofing off of each other. Some articles call them the Three Stooges of Hong Kong for their action comedy, but I’d rather think of them as De Niro, Pacino, and Pesci; here’s hoping they get an Irishman-style sendoff later in their careers. 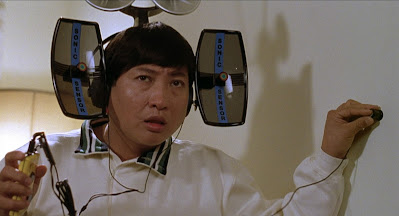 SAMMO IS KING - Co-directing this with Peking Opera school alum and HK action veteran Corey Yuen, Sammo Hung is an international treasure that needs to be protected like the bald eagle, or Caribou Coffee. Hung’s filmography is littered with roles where he plays the “fat” guy for comedic purposes; just take a look at his filmography and see how many of his roles have the word “fat” attached to the name. Good for him knowing that his size is his moneymaker, but the movies do tend to accentuate his size and round face by chopping his hair into a bowl cut. Some shaky internet research reveals that he’s the same height as Chan and Biao, but around 60 pounds heavier, which makes him an incredible athlete and martial artist, in addition to being a fine comedic and action actor. He’s worked in over 200 films, starred in the first American TV show with an East Asian lead (Martial Law), and is the mentor of so many actors and directors in the Hong Kong film industry: a big man with a big heart.

DON’T ASK QUESTIONS - Why does Chan play a lawyer that everybody seems to accept is really good at kung fu? Makes it seem like Chan is just playing himself, rather than a character. A kung fu fighting lawyer is totally fine, by the way; what’s weird is how it never gets questioned. 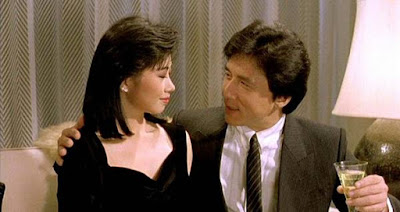 WHY IS EVERYONE SO THIRSTY - There’s a sequence where Chan walks out of court with his lovely young assistant, who clearly finds him romantically interesting, and then he hits on three women on the way out. Also, a major part of the plot development relies on Chan and Hung charming women into revealing incriminating information, including getting a spinster to fall in love. These are not the guys you send for this. 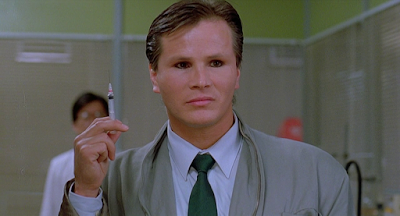 CRUSH WITH EYELINER - Benny Urquidez, playing the big bad villain, inexplicably wears so much eyeliner. I am not one to comment on fashion, but it struck me as odd. However, if you’re also a multiple world champion in kickboxing and full contact karate, then you can do whatever you want, Mr. Urquidez, sir.