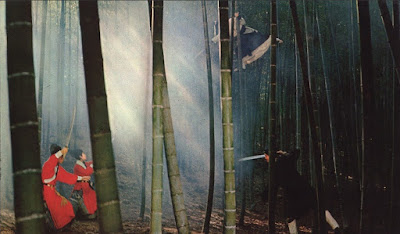 A mysterious, beautiful stranger in hiding.

The Premise in 30 Words, in honor of 30 Days of Junesploitation

A humble scholar gets wrapped up in an assassination plot involving a dead politician’s daughter, who is targeted for exposing the corruption of the government. Oh, and there’s Shaolin monks.

The Most Junesploitation-y part about this

There are many ways to enjoy Junesploitation: watching something new, something old, or something that you’ve been meaning to get to but haven’t until now. My choice is to go back to the totemic movies that exploitation movies sought to emulate in the first place. A Touch of Zen, directed by King Hu, has its modern aesthetic descendants in Crouching Tiger, Hidden Dragon, Hero, and The House of Flying Daggers, but it also helped to establish martial arts movies on the international stage, winning the Technical Grand Prize at the Cannes Film Festival in 1975. Being merely first of its kind isn’t enough to make it noteworthy; it’s a one of a kind wuxia epic. 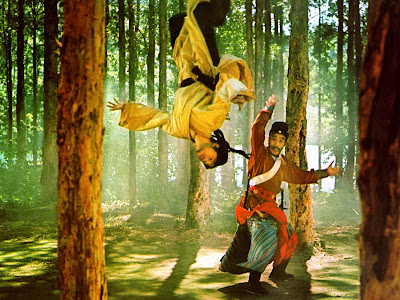 GENRE MASHUP - Part detective story, part horror, part martial arts, but mostly an epic, taking full advantage of the beautiful wide vistas of Taiwan. Why don’t more directors do this? Just film whatever you’re doing in the most beautiful location you can find.

The detective story begins by centering on Gu, a humble but unambitious scholar who runs a portrait shop in his town. He encounters a stranger who sits for a portrait, using the opportunity to ask Gu about various details about the town’s residents. Unknown to Gu, the stranger is an assassin searching for Yang, the only daughter of a dissenting politician who threatened to expose corruption in the government. Yang is actually hiding in an abandoned fort on the edge of town, hoping to avoid detection from the authorities searching for her, while her allies attempt to help her in secret. Who will find who first? What will happen when these forces collide?

The switching of the genres is perhaps one of the explanations for the movie’s run time (187 minutes), but it also gives viewers a chance to absorb Director Hu’s rich visual style. The shifts in genres also roughly coincide with a shift in major perspective as the pot progresses, going from Gu, to Yang, and then onto a third character, the Shaolin Abbot Hui.

WOMAN WARRIOR - Hong Kong legend Hsu Feng plays Yang, who becomes the central character of the story, even if she isn’t always the primary viewpoint. The original Taiwanese title for the film is Xia Nu, which translates to “chivalrous woman,” which would suggest that the story is perhaps about a woman who taps into traditional marital (rather than martial) values or has an emotional, rather than a physical strength. Instead, Yang taps into the stoicism that many early martial arts films portray in their heroes; I love that the movie allows her to be tenacious and have her own agency, especially later in the story when romantic interests or male comrades could come to rescue her. Yang is no pushover or charity case; she’s just as tough and dangerous as anybody else.

SHAOLIN FOR THE WIN - Most of the time in martial arts movies, monks function as bearers of impossibly high standards, which is why the stories often reflect people who are trained by the monks (Gordon Liu in The 36th Chamber of Shaolin), or monks who have “fallen” by demonstrating some sort of human attachment (Chow Yun Fat in Crouching Tiger). We rarely see a monk outside of a training montage, sternly looking at our protagonists, genuinely pursuing the Buddhist ideal of enlightenment, mostly because we want to see the fighting. The Abbot Hui (played by Roy Chiao), however, is a completely different story. He is serene but authoritative; powerful but measured, a feasible representation of an ethical man living his life with integrity. His arc in the final third of the movie elevates the movie to its transcendental thesis, a long journey from the small concerns of a portrait shop at the story’s beginning.

VISUAL AESTHETIC - Director Hu had originally worked his way up through the Shaw Brothers system, but moved on to a Taiwanese studio, Union Films, to make A Touch of Zen, citing that he wanted more creative freedom in visual design, which definitely shows up in the sets and costumes and production design. It’s a gorgeous film to look at. 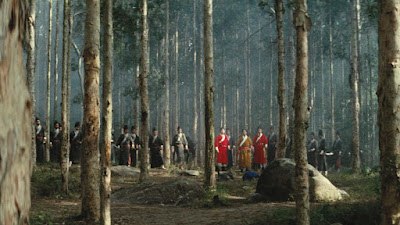 EDITING - One of the most distinctive parts of the movie is the lightning quick cutting during fight scenes, which, when paired with the trampoline wirework and the sudden zoom to wide shots, makes it as if the eye of the camera can’t keep up with the supernatural reflexes of the fighters. The director himself claimed ignorance of “kung fu and Shaolin tales” and focused more on the operatic presentation of his story. The bamboo forest fight is a particularly amazing example of all of these elements combining; it took 25 days to shoot the 10 minute sequence.

RUNNNNNNNNN TIME - Originally, the film came out in two parts, totally 200 minutes, before being pared down to the 187 minute cut that most people are familiar with.

THAT GUY - A young Sammo Hung and a young Jackie Chan make appearances.

The Criterion Collection released its version as a 4K restoration in 2016.