Movies is Good: Some Thoughs on COFFY

WARNING: This column will contain no puns based on the film’s title.

As an old, white man, I feel the least qualified of anyone on the F This Movie! staff to talk about Blaxploitation Day, although in the past I have waxed fan-riffic over Sweet Sweetback’s Baadasssss Song and even recorded a podcast on that fine film with our own Patrick Bromley, who, truth be told, may be even whiter than me.

Friend of the site and generally great guy Mike Piccoli held an outdoor screening last weekend to celebrate both his milestone birthday and Junesploitation’s “Revenge” day. (Mike knows how to party.) He showed the largely thirty-something crowd John Flynn’s Rolling Thunder and Jack Hill’s Coffy. I had not seen the latter film in years and, although it was late in the night when that disc finally spun, it was a gas seeing it again with an audience that had never seen it. 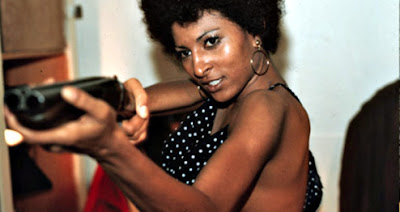 AN ANNOYING AUTOBIOGRAPHICAL PAUSE: My most memorable screening of Coffy was at the Chicago International Film Festival in the early 1990s; a separate ticket admitted patrons to an exclusive Q & A with Pam Grier at a nearby Chicago watering hole. Not only did I score tickets to the screening, thanks to a colleague who was well connected, I also scored tickets to the Q & A.

The screening was fun, as any screening of Coffy will be fun. It’s a fun movie. My wife and I thought the screening alone had more than justified the expense of a babysitter that night. But imagine our chagrin when we arrived at the Q & A and discovered that no one there really had any interest in listening to Pam Grier. Really. Though she was being interviewed on a stage in the front of the joint, and both she and the interviewer had working microphones, the crowd sat at their little tables, drank, smoke, talked loudly and generally carried on as if nothing was happening on stage that was of any interest. Nothing of any interest? PAM GRIER WAS IN THE ROOM. Pam Grier deserves our respect. That night had me wishing that Pam Grier would shot-gun one of these loudmouths in the crotch, just to make an example of him. 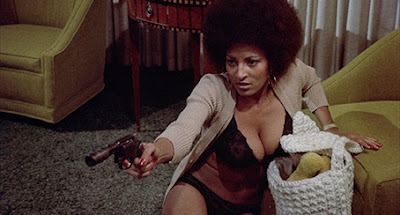 Goddammit. The interviewer tried to shush the crowd at several points, but it was to no avail. These weren’t film fans. I don’t know who the hell they were. I still haven’t quite figured out who the hell they were. Perhaps, in the words of comedian Bill Hicks, they were “demons, sent from hell to lower the standards of the perfect and holy children of God”?

Pam, if you are reading this (You are not.) My wife and I… listened. You were terrific.

At this most recent screening, I was impressed by Jack Hill’s storytelling ability; the movie starts in the second act, really, and fills us in on necessary exposition only later, after we’ve been hooked by the story. It’s a neat trick that I wish more filmmakers used. Many filmmakers, even some famous filmmakers, think that every story needs to start on “Day One.” No, it doesn’t. This reminds me of my days teaching freshmen composition to high-school students: no matter what they were writing about, if it were a first-person narrative, the essay would start WITH THEM WAKING UP IN THE MORNING.

Coffy begins with the main character killing the first of what will be many scourges of the black community, and the audience has a chance to live vicariously the life of a cool, sexy, vigilante woman of color. I have never shot-gunned a drug dealer’s head clean off, but thanks to Jack Hill’s Coffy, I can say that I feel like I have!

I will say that I found myself feeling very uncomfortable every time a white character used the “N word.” I know that more casual use of this word was much more prevalent in the 1970s, but I have to think that this single dialogue trope packs more of a punch now during a more mindful time. It is only the bad guys that use the epithet, though if you think about it, Coffy is a film with very, very few “good guys.” 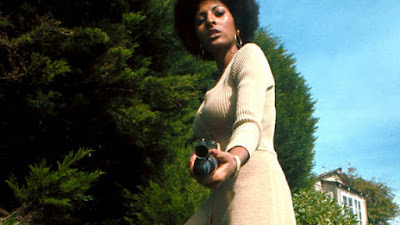 Many of my readers are probably familiar with the concept of “Chekhov’s Gun,” which describes how every part of a story should contribute to the whole. According to NowNovel.com, it comes from Anton Chekhov's famous advice, “If in the first act you have hung a pistol on the wall, then in the following one, it should be fired. Otherwise, don't put it there.” Coffy contains what might be my favorite use of this device, only here we will have to call it “Chekhov’s Razor Blades Hidden in an Afro.”

I also admire that in the midst of all the shoot ‘em up action and sexy sex necessary to appease the film’s intended audiences, Jack Hill manages to slip in some street sociology that is still honest and trenchant and true. The villain has an extended monologue about the inequity of drug traffic in the inner city managing to benefit whites more than blacks. This is from the mouth of a character who says the only color he cares about is green. Of course, because this is a Jack Hill film, this character is eventually shot-gunned in the crotch.

I like my social problem films to be leavened with a healthy dose of crotch trauma.

Maybe next year, Patrick will consider making “crotch trauma” its very own Junesploitation theme?
Happy Blaxploitation day, everybody.
Posted by Patrick Bromley at 5:00 AM