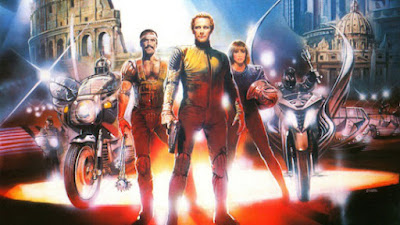 Rob: Our Junesploitation coverage continues with Lucio Fulci’s Warriors of the Year 2072, also known as The New Gladiators. The Italian sci-fi adventure stars Jared Martin as Drake, champion of dystopian American television’s #1 program, Kill Bike. Hoping to draw more viewers to his own programming, Rome’s competing network chief Cortez (Claudio Caassinelli) captures Drake and forces him to compete in a “Battle of the Damned,” a new deathmatch competition that pits convicted criminals against each other for a chance at freedom. Meanwhile, network researcher Sarah (Eleonora Brigliadori) discovers that Drake was framed for murder and attempts to unravel the conspiracy before it’s too late.

Sort of? I think? That’s the gist of it, right? It doesn’t matter. Warriors of the Year 2072 is a masterful Italian ripoff, drawing inspiration from Mad Max, 2001: A Space Odyssey, A Clockwork Orange, Escape from New York, Rollerball, and a thousand other exploitation and genre movies. It features blasters, motocross, mind control, political commentary, martial arts, laser satellites, artificial intelligence, flamethrowers, corporate intrigue, and melting faces. It’s as if one of those Mill Creek 25 Movie DVD sets was condensed into one ninety-minute movie. It looks like it cost about $200 to make, but every cent of it is on the screen: The costumes, sets, miniatures, and special effects are so goddamn charming that you hardly care that they look about ready to fall apart at any moment. Fucli and his team ensure that every frame is packed with things to look at, even if it’s just a stray strobe light going off in the background. This is exactly the kind of movie Junesploitation was made to celebrate.

What did you think of Warriors of the Year 2072, Adam? 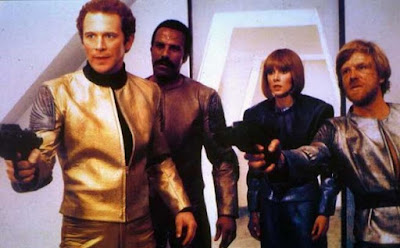 Adam: I’ll be honest. I was worried going in that I’d have a tough time watching Warriors of the Year 2072 because Lucio Fulci horror movies make me uncomfortable in a way that most horror movies don’t. Then I pressed play and saw it was a Troma release and got really worried because their output (with the rare exception like Def By Temptation) are also one of my movie allergies. To my surprise, I ended up enjoying Warriors of the Year 2072 and didn’t have any problems with the violence or griminess that I’ve had with Fulci or Troma in the past. This is one of those movies where it’s easier to point out my appreciation with bullet points, so here are a few to start:

● I laughed when Jared Martin and Fred Williamson walk past a skeleton and Martin says “Must have been one of the gladiators” and Williamson replies “Looks like he didn’t make it.”

● There’s a character named Monk (a dude with a melting face played by Donald O’Brien) who looks like White Sox manager Tony La Russa. When his third act reveal happens it makes the comparison even more apt.

● I loved the scene where Professor Towman (Cosimo Cinieri) is introduced playing a pipe organ for no reason in a room that probably wouldn’t have a pipe organ.

● I appreciate that the movie discards Fred Williamson’s character in the final minutes with no explanation of where he went and what happened. Did I miss something?

● The theme song is fun. It reminded me of a catchy Nintendo or Sega theme that loops every couple of minutes.

Are you a fan of Death Race clones like Warriors of the Year 2072 in general? It’s a pretty easy formula to make a satisfying movie from. 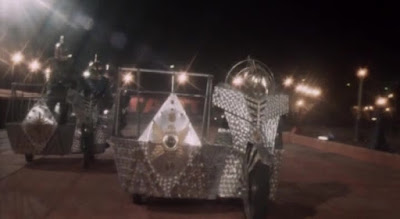 Rob: I can’t say it’s my absolutely favorite genre, but I do seem to have a general fascination with clones/ripoffs that come up in the wake of game-changing movies. They’re always this weird exercise in subjectivity: What do people think makes The Matrix stand out? What specifically appeals to them about Pulp Fiction? How is that different from what I’ve taken away from them? There are the overt, tangible details that anyone can see (leather coats, guns, etc.), but the river of imitators always exposes the original’s intangible qualities in such a fascinating way. It wasn’t pop culture discussion; it was the music of Tarantino’s dialogue. It wasn’t Bullet Time; it was what that detachment from time as we experience it said about the overall themes of the film. What I like about Warriors of the Year 2072 is that it has no pretensions of a higher purpose. It’s just a grab-bag of stuff that was popular and easy to replicate. It was meant to sit on a video store shelf and give someone that extra jolt of Death Race or Mad Max they were looking for.

Speaking of which: If you were a low-budget genre director and a Corman-esque figure offered you money to make a pastiche project like this, what genres would you draw from? I want to do a One Crazy Night murder mystery: Knives Out meets After Hours. Something like that.

Adam: I would 100% watch a Knives Out-After Hours hybrid. I’ve always wanted to make a slasher romance where the audience thinks they’re just seeing a slasher movie but that part ends ⅔ of the way through and the last act is a Final Girl realizing she likes the Final Guy or Girl and wants to have a relationship with them. My other dream project is a Fast and Furious meets Enter the Dragon mash-up where the fight sequences are races with cars, ATVs, motorcycles, Go-Fast boats, foot races etc. I need a F&F that’s just a case of the fuckarounds and all about the characters and not tied to the larger plot. That was a fun question! 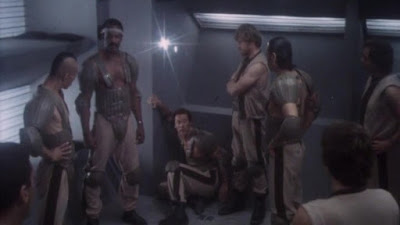 I have a random question for you before we wrap. Does the quality of a film’s transfer affect your enjoyment of the movie? For me it does a lot. If the movie looks like a VHS, I find it really difficult to get engaged unless the movie’s great like Extreme Prejudice or something. If I saw Warriors of the Year 2072 in better quality than what was on Amazon Prime, I would probably like it even more.

Rob: I can’t say that I always notice differences in clarity between certain newer formats quite yet (Blu-ray vs. 4K, for example), but I agree that a movie should always be seen in the best possible quality.

We’ll be back to celebrate Danny Trejo on Free Space day with 2010’s Machete. Until next time…