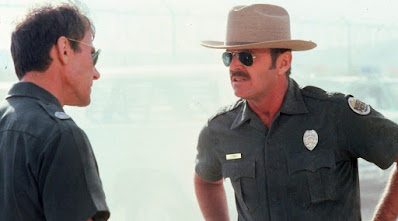 Cop Land but in El Paso.

The IMdB synopsis for The Border is like if the synopsis for Moonstruck read, “After being caught having an affair by his daughter, a man reconsiders his philandering habits.” Sure, that's true. That happens. But ultimately that's not the movie you're going to see. In The Border, the synopsis tells us a corrupt border agents rescues the baby of a Mexican woman. Sure, that's true. That happens. But that synopsis says nothing about the scene where Jack Nicholson and Valerie Perrine begin foreplay on a brand new water bed to the sounds of a seafood restaurant commercial selling itself as the place with the non-fishy taste and non-fishy smell. 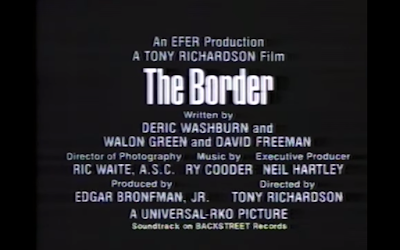 The Border opens with immigration official Charlie Smith (Nicholson) interrogating and arresting two illegal immigrants at a factory. Charlie is kind and speaks nicely to the two gentlemen he is arresting while we immediately recognize this man, with this personality, does not belong in this line of work. We then move to El Paso where Charlie and his wife, Marcy (Perrine) have just bought a house and are greeted by Marcy's old friend Savannah (Shannon Wilcox) and her husband Cat (Harvey Keitel). Charlie has recently been hired as a border patrol agent and is stationed at the same outpost as Cat. During his first night on duty, Charlie's partner is shot and killed, leaving Charlie to be partnered with Cat. To no one's surprise, Cat and their commanding officer played by Warren Oates are on the take, letting some immigrants pass through in exchange for a percentage of the coyote's fee. Cat cuts Charlie in, Marcy makes living in El Paso seem like they're in Beverly Hills, and at one point Charlie helps an immigrant mother search for her stolen baby.

Two years before The Border we got the Charles Bronson flick Borderline (co-starring Ed Harris in his first movie). The Bronson is a little more exploitative while the Nicholson has more heart. Other than that, they're the same movie. That isn't to say, though, that you should skip one or the other. Both are very entertaining and each are full of your favorite character actors. While Borderline leans all the way into its exploitation roots, The Border tries to be more serious, and in turn gets a little messy. Working from a script by Deric Washburn, Walon Green, and David Freeman, director Tony Richardson isn't fully able to bring cohesion to a story that tries to do too much.

A quarter of the movie deals with the relationship between Charlie and Marcy. Charlie wants a simple life where he can feed ducks. Marcy wants the lavish life with pool parties every weekend and a house full of shiny objects. He doesn't understand her any more. “I married a banana. A fucking banana.” Another quarter of the movie is a fish out of water story. Charlie has to reconcile the fact that he's actually the bad guy. Never mind the corruption. The way Charlie handles the immigrants he catches is in stark contrast to his colleagues. He's gentle. He's soft spoken. Even when catching someone after running after them through the desert, he barely lays a hand on them. When Cat does it he tears their clothes, punches them, kicks them, even kills them. A third quarter of the film deals with the corruption of certain border agents. Cat and and Oates have cut a deal with the main coyote that transports people across the border in their area. After Charlie is cut in, he has to deal with his guilt knowing that he is now in the business of human trafficking. When he gets home and sees his wife has bought brand new bedroom furniture and has an underground pool dug out, he knows it was all bought with dirty money. Charlie is seeing first hand people profiting off their inhumanity. And the final quarter of the movie deals with a white savior scenario. I understand many people may see this in that sort of light, and I won't blame them. But we're watching a movie about a white, American, male border agent who has a heart. He needs some sort of redemptive hook to get us back on his side, and it works. Plus, Jack Nicholson in this role doesn't hurt one bit. And we're treated to a shockingly violent outcome that includes some pretty great special effects.

I think it's hard to tell this sort of story well. As an American, and especially a white American, I'm forced to confront my own feelings and biases when watching a movie or show or reading a story about the immigrant experience. Movies like Taylor Sheridan's Sicario and Gigi Saul Guerrero's Culture Shock do it well with concise storytelling and expert filmmaking. Movies like The Border and Borderline are entirely a different animal from an entirely different time period. As long as you have that in mind, have a ball.
Posted by Patrick Bromley at 5:00 AM