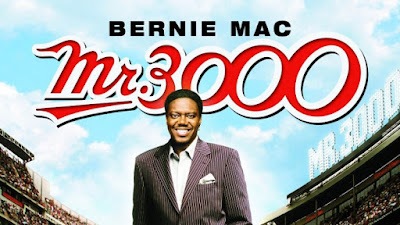 The review duo who need this review to get 3,000 clicks!

Adam: Our baseball series returns with a look at 2004’s Mr. 3000, directed by Charles Stone III (Drumline) and starring the late Bernie Mac. He plays Milwaukee Brewers First Baseman Stan Ross, who's sort of a hybrid between Tony Gwynn (a left-handed hitter known for his average and number of hits) and Barry Bonds (gifted but also widely criticized by the media and hated by most of his teammates because he was an enormous asshole who also cheated, but that’s beside the point). Ross ties his entire identity to the accomplishment of collecting 3,000 career hits, which is a significant feat in the sport and normally signifies a no-brainer induction into the National Baseball Hall of Fame. However, Ross’s reputation as a selfish player who only values his individual accomplishments has kept him out of the Hall. It’s discovered by fact checkers that three of Ross’s career hits were counted twice, so Mr. 3000 is actually only Mr. 2997, which only further cements that Ross won’t get into the Hall of Fame.

Seeing a publicity stunt for a fledgling team with low attendance, the Brewers General Manager (Chris Noth) and Ross conspire to give Ross a month of at bats (nine years after his career ended) to reclaim the missing three hits. The movie co-stars Angela Bassett, Michael Rispoli, Brian J. White, and Paul Sorvino.

Rob: Before we get into the movie itself, I just want to say that this premise rules. That’s all. It’s a really simple and elegant sports comedy premise. 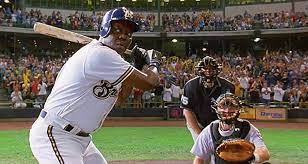 Adam: I saw Mr. 3000 in theaters (on opening day!) but haven’t revisited it since. At the time, I threw it aside as just another middling and forgettable baseball movie. I liked it slightly more on this rewatch and I think it mostly had to do with missing Bernie Mac and a few idiosyncrasies that I found subjectively amusing (like reflecting on the career of Michael Rispoli or the hotshot Brewers star player being named T-Rex Pennebaker). It’s really sad to think that Bernie Mac passed away just four years after this film was made. He’s very good in the role (although believing him as a baseball player is a bit of a stretch) at vacillating between playing the asshole, the stubborn baby, the romantic, and the guy who begins to learn and grow as a team player at a late age. I wish Ross didn’t play on the Brewers because Miller Park’s interiors are nauseating to look at, but that’s a nitpick.

What did you think of Mr. 3000, Rob? Did you know the man in the sausage costume was played by Dane Cook? Remember Dane Cook?

Rob: I’d rather not. This was my first time watching Mr. 3000, and I have to say that I kind of loved it. As you said, it’s 100% by-the-book, fill-in-the-blank sports comedy stuff, but it’s executed really well where it counts, which goes a long way. I like the idea of T-Rex as a mirror to Ross’ old persona and the way he ends up inspiring the latter man’s growth. I like that Chris Noth’s GM is grubby but not so unnecessarily sleazy that he becomes a cartoon. I like the Paul Sorvino character’s late-game twist (it’s a silly bit, but it’s actually good enough not to spoil here) in support of Ross. I like the way Ross builds camaraderie among the Brewers (especially the running gag with Ian Anthony Dale’s native Japanese-speaking player who couldn’t curse correctly) and how he comes to appreciate the value of leadership. I like Ross’ relationship with Boca (Rispoli), which is a realistic mix of earnest support and toxic enabling. I like that Angela Bassett’s perfunctory love interest character at least got a few nice scenes to shine. I even thought the baseball action was shot pretty well, which is often a running gripe of ours in this series. Again, there is absolutely nothing special about Mr. 3000, but it colors inside the lines in a laudable way. 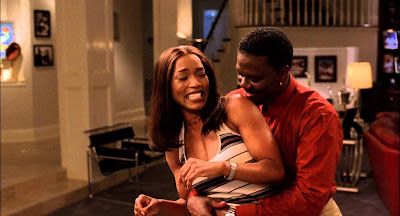 And then there’s Bernie Mac, who, as you said, is incredibly charismatic in Mr. 3000, and I agree that his untimely death was a huge loss for Hollywood. I was reminded of his wonderful Ocean’s Eleven turn from just a few years earlier, and I was mourning the dramatic work we might have gotten from him in more recent years: As charming as he is, he also plays sadness really well; he makes it expressive rather than depressive, if that makes sense. He could have easily gone the Adam Sandler/PTA route.

Adam: That’s a great point. He doesn’t mope, but rather sort of acts out where you can tell he’s bothered by something but it’s played as subtext to something else happening.

Rob: Two bits for you:

1. Can an MLB player just quit in the middle of a contract? It’s not as if he could make something up about his health or family. He announced why he was quitting on live TV!

2. Speaking of which, I thought it funny how much of Mr. 3000’s drama is fought through the media. I know that’s a function of Bassett’s reporter character and Ross’ axe to grind against the Baseball Writers Association of America (the group that elects players to the Hall of Fame), but it still stirred a bit of nostalgia for the old days when we had a monoculture.

Adam: I’m sure a player could breach their contract if they wanted to forfeit the rest of their deal. That’s had to have happened before I would think. We’ve talked about your second point in relation to movies but I agree that it applies somewhat to sports, too. Baseball (because of its regional elements) is harder to be a monoculture than say the NFL. 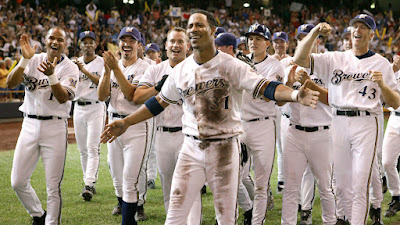 Reel talk: How many hidden ball tricks do you think Hollywood believes there are in a given major league baseball season? Anything else on Mr. 3000? I’m glad we revisited it! Second time was the charm. I hope T-Rex Pennebaker is doing well.

Rob: Yes! I forgot all about that. I remember being obsessed with the hidden ball trick after Rookie of the Year and being phenomenally disappointed that it didn’t come up once a game in real life. As opposed to ROTY, though — in which Henry Rowengartner illegally pretends a rosin bag is the ball — Mr. 3000 uses it the way it's most often used in real life — by an infielder who realizes a runner isn’t paying attention. I can definitely understand why Hollywood loves it, though. Aside from the home run, it might be one of the more fast-paced and cinematic things about baseball. As for Pennebaker, I would absolutely add him to my Legends roster in MLB The Show. Kid has pop.

Anyway, I definitely like Mr. 3000 more than I should, and I guarantee I’ll forget we watched it six months from now. But I’m okay with it. This was fun! Our Rest of the Furious series returns next week, honoring Tyrese Gibson in the late John Singleton’s Four Brothers. Until next time…