Review: PRISONERS OF THE GHOSTLAND 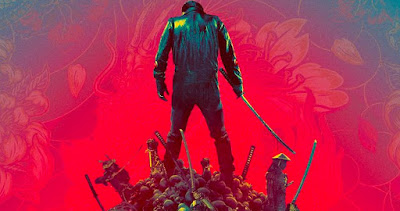 My favorite actor and one of the exciting, original filmmakers currently working join forces in one of my most anticipated movies of the year.

Three quarters of the way through Prisoners of the Ghostland, director Sion Sono's new post-apocalyptic samurai spaghetti western starring Nicolas Cage, my wife turned to me and said "I feel like this is extremely your shit." She's right. Prisoners of the Ghostland is extremely my shit. All the elements are in place for a film that feels like it was made specifically for me. That those elements don't always come together in a completely satisfying way doesn't totally matter to me, because this is more of a vibe movie anyway. I vibed with it pretty hard. 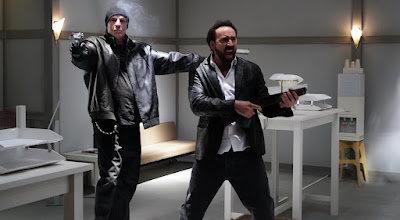 Nicolas Cage plays a version of Clint Eastwood's Man With No Name (the credits list him as "Hero"), who, as the film opens, partners with Psycho (Nick Cassevetes, reunited with Cage after Face/Off) in a Japanese bank robbery gone horribly wrong. Cage is imprisoned as a result, finally released after years at the behest of The Governor (Bill Moseley), the leader of the post-nuclear landscape Japan has become, to find his "granddaughter" Bernice (Sofia Boutella). The catch is that he has only three days to do it before being blown up piece by piece, as he's outfitted with a suit with bombs on the arms, neck, and testicles. Hero must travel across the Ghostland, part Old West, part feudal Japan, part post-apocalyptic wasteland, to bring back Bernice or die trying.


As wild as Prisoners of the Ghostland sounds -- and on paper it reads as pretty wild (aided and abetted by star Nicolas Cage telling the press it's the "wildest movie he's ever made") -- it almost doesn't go wild enough. As someone who has seen a number of Sion Sono movies, I know just how crazy he's able get on screen. Prisoners of the Ghostland seems timid by comparison despite having so many of the elements in place. I suspect it's a movie I need to see again, because I'm certain it's falling victim to the "movie I expected to see versus the movie it is" phenomenon; knowing who made it, who stars, and what it's about, I was expecting one thing and got another. I quite liked what I got -- a hallucinatory, darkly funny, futuristic spaghetti western -- but I'd be lying if I said it delivered exactly what I was anticipating. 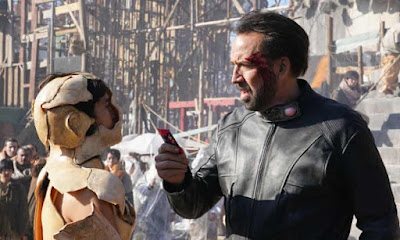 Thankfully, my man Nicolas Cage shows up as he always does, dragging to the film to success even when it wanders away momentarily. He's stoic and silent when need be, much as he is in this year's Pig and Willy's Wonderland, but he also goes full Cage with lines like "Testicle!!" that only he can deliver. He knows just what movie he's in and, as he always does, pitches his performance perfectly to match the energy of the film. Sofia Boutella is given less to do as Bernice but is always compelling on screen; she should be a bigger star than she is by now, but I appreciate her willingness to commit to weird, wild cinema like Climax and Prisoners of the Ghostland. I hope she never changes. Bill Moseley, who rarely gets a role this good outside of a Rob Zombie movie, is also terrific in a handful of scenes as the villainous Governor, a guy who only gets worse the more we learn about him. One of the best performances of the film comes courtesy of Tak Sakaguchi, who steals his every scene as the silent Yasujiro, the Governor's bodyguard. He's the biggest badass in a movie with a handful of badasses. 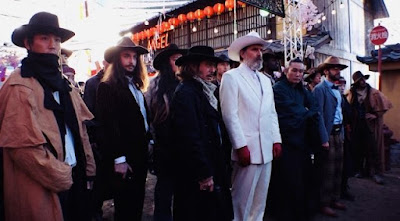 I've talked to friends who saw Prisoners of the Ghostland during its festival run and came away disappointed. I get it. It may not be the movie you wanted on first viewing. I hope some of the people let down by what the film delivers will give it another shot, because we so rarely get movies this gorgeous and weird and in love with so much of the shit that makes movies cool (I mean Mandy, sure, but we can't expect all movies to be Mandy). It's a movie I'm still thinking about days after seeing it, anxious to revisit it and immerse myself back in Sion Sono's world. It feels wrong to call a movie with this much wild stuff a hangout movie rather than a ride, but that's what it is: a genre mashup hangout movie with testicle bombs and samurai fights. It helps to know what to expect.
Posted by Patrick Bromley at 5:00 AM