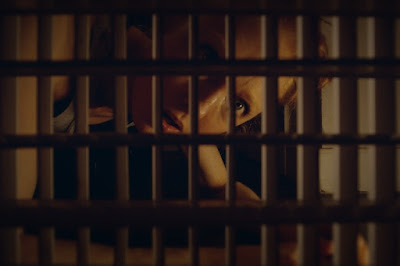 Emily Bennett is an actress, writer, and director whose first feature film, Alone With You, is a thrilling slow burn exploration of relationships, grief, and psychosis. Alone With You premieres as a selection of the virtual edition of the 2021 Salem Horror Fest, which runs from October 22nd through October 31st. Bennett, who is known for Chicago Fire (2014) and Blacklist (2016), wrote and directed the film with Justin Brooks (Jessa Kill, A Dark Meeting).

Bennett stars as Charlie, a makeup artist who lives with her girlfriend Simone, a photographer, played by Emma Myles (Orange is the New Black). Simone has been away on a photo shoot and Charlie is preparing a romantic evening for her when she returns, complete with flowers, wine, and lingerie. When Simone doesn’t return home several hours after her flight lands, Charlie begins to worry.

To add to her concern, Charlie begins hearing strange noises in the apartment and realizes her front door is stuck and won’t open. Since this is a regular occurrence, she leaves a message for her landlord and receives a video call from her mother, played by horror icon Barbara Crampton (Re-Animator, You’re Next), in a fantastic surprise performance. It’s evident her mother doesn’t approve of Charlie’s lifestyle or career choices and soon it becomes glaringly obvious that the only reason she called is to ask Charlie to return a necklace given to her by her grandmother, who just passed away. Charlie also realizes she can’t see out her windows but she’s more worried about the possible reasons for Simone’s delayed homecoming.

Charlie is becoming increasingly anxious over Simone not returning home and isn’t in the mood to deal with her hypercritical mother. To make matters worse, Charlie’s friend Thea, played mischievously by Dora Madison (Bliss), keeps calling her from a bar begging her to join her, while trying to convince her that Simone is bad for her. During the increasing chaos, Charlie is having flashbacks of finding flirty text messages on Simone’s phone and seeing her with a strange man.

Not sure how much time has passed because she can’t see out the windows, and oddly, the time on her phone has disappeared, Charlie becomes disoriented. Although the first half of Alone With You might be a little too slow for some, the way the tension and terror are ramped up in the last half of the film, as well as Bennett’s tormented performance as Charlie, make it worth the wait.

Distraught over her predicament and spooked by noises and unusual things she’s seeing in the apartment, Charlie calls 911 for help getting her front door open. She’s convinced that if she can just get out of the apartment, there will be a reasonable explanation for Simone being late, as well as all the other peculiar things she’s experienced while waiting for her to return. 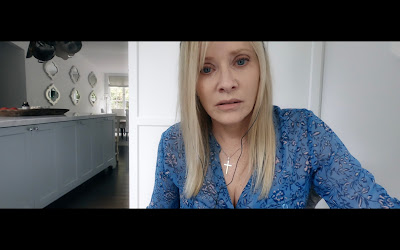 Throughout the film, Bennett is bewitching as Charlie, who begins to descend into madness and despair, as the story unravels around flashbacks of her life with Simone. Alone With You features remarkable performances (and a great surprise appearance by Barbara Crampton!), as well an anxiety-inducing, gruesome last act. Ultimately, the film is a consummate study of relationships, as well as Charlie’s deteriorating mental state, and while the film is slow in revealing the story, the horrifying climax more than makes up for the wait.