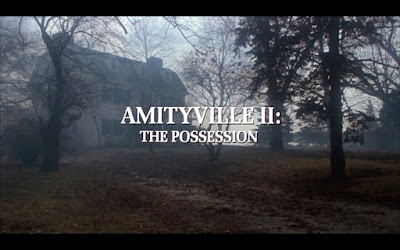 Dishonor thy father!
In the world of horror – or cinema in general, I suppose – there is one thing lacking for which the world's population has been clamoring since Thomas Edison first invented that moving picture camera. In 99.9% of the films I watch, there has been, and most likely will always be, a hollow spot in my heart, left untouched by the story I'd just witnessed, waiting – nay, yearning – to be filled with that subject to which I'm so coyly eluding. In a movie where a teenage girl utters the phrase, “There's something strange. I don't think Mommy wants to make love to Daddy anymore,” future events of this particular story will not shock you in all likelihood. And when that dark and cavernous place in your heart that has been void of the one thing it has been craving is finally filled, the palpitations that ensue can strike one as alarming because it isn't often we're treated to such delight. The delight I'm speaking of? Why, incest, of course!
Naturally, I'm kidding, and it should be known that I do not promote such a thing and, in fact, think it to be quite vulgar. But leave it to Tommy Lee Wallace and Damiano Damiani to give the world a sequel that, for my money, as well as countless others', is far superior to the original or the slew of sequels, prequels, reboots, and ripoffs that have and will continue to be released until the end of time. Because if it's one thing Hollywood has learned in its storied history, it's that intellectual property is bankable and, no matter the quality of said product, it will find it's audience. Before IP, or the name Amityville for that matter, became part of everyday vernacular, Wallace, a childhood friend to and fellow USC student with John Carpenter, wrote the screenplay for the follow-up to AIP's runaway hit The Amityville Horror. The rights for the sequel were bought by Dino De Laurentiis (an indicator for the type of bonkers you can expect from this film) who optioned the book Murder in Amityville by Hans Holzer. Wallace was hired to write the script, and Damiani was hired to direct. 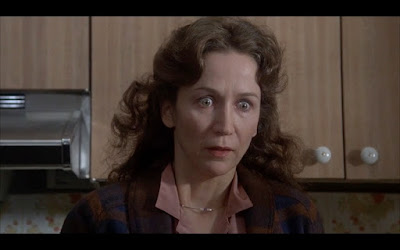 Judging by Amityville II, I'm not completely convinced “Damiano Damiani” is a real person. He may be an entity, but you can't tell me an actual human being with the name Damiano Damiani directed this film. Amityville II: The Possession is a movie made by lunatic creatures from a different dimension. Like movie synopses written by artificial intelligence today, these extraterrestrial beings compiled data from citizens of the world in the early 1980s, took a little of Fulci's The Beyond, traveled to the future to collect a little of The Demon Murder Case and William Peter Blatty's The Exorcist III, crushed it all into a fine powder, snorted it, and then made Amityville II: The Possession.
Following the events concerning the Lutz family in the original film, the sequel sees a new family move in. Burt Young, clearly intoxicated during the entire filming of this movie, is our abusive patriarch; so hateful and mean is he that, unlike James Brolin in the first film, from the minute we meet him we loathe to even look at him. His wife, played brilliantly by Rutanya Alda, is the doting wife and mother who only wants to keep her family together, but circumstances beyond her control prevent her even from the peace of sanity. Then there are the children: little Mark and Jan, young teenager Patricia (Diane Franklin), and the elder son, Sonny (Jack Magner). The house, still filled to the brim with the ghosts and demons of the first film, once again chooses its victim to possess – this time it's Sonny – and turns him into a perverted, murdering, sex fiend with eyes for his sister. 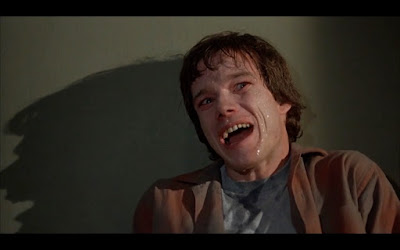 As if our dysfunctional family and demons weren't enough, our crew of madmen filmmakers decided to capitalize on the phenomenon of The Exorcist and throw in a priest to expel said demons. Played by James Olson, Father Adamsky is a Damien Karras-type character who is reluctant at first to help, but when Patricia confesses (not fully) “her” sexual transgressions, he gets a little more involved. That is until we're fully inside – and keep in mind, this is eight years prior – the scene in The Exorcist III where Kinderman is interviewing Patient X in the jail cell. There are moments that left me saying to myself, “Holy shit what is happening right now?” – the appalling incest scene for one. There are moments that actually scared me – in the point of view of the demon, we chase Sonny around the house until we finally catch him. (The fact that there are extended takes with few cuts in this sequence adds to the terror.) And by the time the credits rolled I found myself smiling and fulfilled. 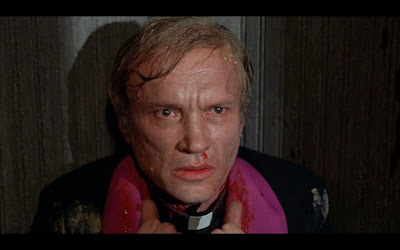 Again, this is another film on which I could write a few thousand words. There is so much to unpack: Is it the hassle of moving that keeps people living in an obvious death trap? Why does Burt Young have eight rifles out in the open? How did Tommy Lee Wallace get so lucky in creating two cult favorites – sequels, no less – in the same year (the other being HalloweenIII: Season of the Witch)? The only thing I can say here is that you absolutely must watch Amityville II: Possession as soon as possible or, wracked with regret, your Scary Movie Month will be ruined.
Posted by Patrick Bromley at 12:00 PM