Adam and Robyn Talk UNDER WRAPS

by Adam Riske and Robyn Buckley 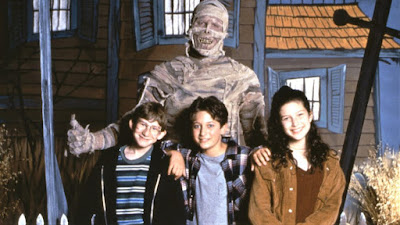 We discuss a Disney Channel Original Movie classic and its 2021 remake.

Adam: I love the original Under Wraps. I saw it on a lark back when it originally aired in October 1997 because I was deep in a Hocus Pocus obsession at the time. This is when I first saw Hocus Pocus in its entirety, and I watched it basically every night for about two weeks. During commercial breaks, The Disney Channel was promoting Under Wraps, which was making its premiere that month. It’s good cross-promotion because Under Wraps is basically the best unofficial Hocus Pocus sequel there is. It’s perfect for someone like me who was chasing the dragon in search of the next Pocus.

Under Wraps tells the story of a group of middle schoolers, Marshall (Mario Yedidia of Warriors of Virtue fame), Gilbert (Adam Wylie from TV’s Picket Fences), and Amy (Clara Bryant, who is like a Jennifer Lawrence-type before there was a Jennifer Lawrence), who discover a stolen mummy and look after it, which leads to shenanigans ensuing a la the kids' relationship with the Frankenstein monster in The Monster Squad. Under Wraps (1997) was directed by Greg Beeman and it made sense why I love Under Wraps when I looked at his filmography: the dude made License to Drive and Bushwhacked! The guy has pedigree is what I’m saying. Before we get into specifics about the quirky delights of the original Under Wraps (and compare it to the new remake), what is your history with this movie? 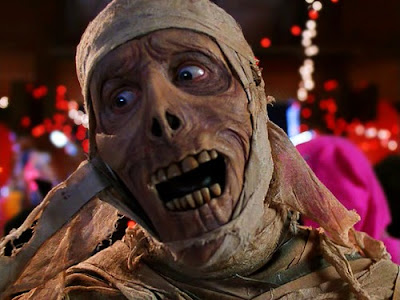 Robyn: My history with Under Wraps is a bit less exciting than yours. I remember seeing the movie as a kid, but I don't think I realized at the time that it was the first official DCOM (Disney Channel Original Movie). I enjoyed it and had seen Under Wraps a few times… but I was always more of a Halloweentown girl! I will say that Under Wraps holds up better than probably any other DCOM that I can think of. This movie is pure entertainment and is way better than it honestly needs to be! It is a late '90s kid film in the best possible way. I hadn't expected that rewatching this version in my 30s would have me riveted to the screen! I was a weirdo and rewatched the 1997 Under Wraps AFTER checking out the remake. This made me spend a lot of time saying things like, "Why did they change this?" And "Why DIDN'T they change this?" How did you find the remake compared to the original?

Adam: I thought the remake was just okay. Admittedly, I was comparing it with the original the entire time (For example, are the actors playing Marshall, Gilbert, and Amy better than the ones in the original?) which probably hurt my enjoyment of the 2021 version. The 2021 version was memorable in some ways (I’ll get back to that in a minute) and better than the low expectations with which I entered the movie. It’s kind of a fascinating experiment in a way because the new Under Wraps follows most of the same beats as the original but you see how much has changed in society and filmmaking between 1997 and 2021. The new version is very diverse in its casting, whereas the 1997 is very white. The opening sequence where they show the fake horror movie within the movie called “Warthead” is way tamer now compared to the “Warthead” movie shown in the opening of the 1997 version. There’s constant “No Spoilers” references in the new version, etc.

What I found memorable in the new one was the weird bits. I dug that the movie had quirks because so does the 1997 version in different ways. Here’s a list of the quirks I like from both: 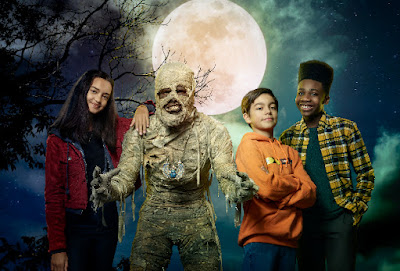 2021 Under Wraps:
1. The character Gilbert is still a nerd but now he’s like Chris Tucker in The Fifth Element for some reason. Seeing that persona filtered as a nerd instead of as the coolest guy in the room was fascinating.
2. One of the main villains, Mr. Kubot, looks like Charles Manson now for some reason.
3. There’s a moment where Marshall and Amy are talking about Dracula and Amy says how much better Christopher Lee is than Bela Lugosi, to which Marshall replies “He didn’t even have fangs!” The entire time I was like “WTF is with this Bela shading, Under Wraps!”
4. There’s a scene where Marshall’s mom and her boyfriend are sitting on the couch laughing during one of the old Universal Monsters Mummy films. I’ve never laughed during those. What is going on with this movie?!
5. The Under Wraps mummies are on display in a museum but for some reason are not protected by glass or anything. The sarcophagus is just kind of laying on the floor and anyone in the museum can basically go up and start touching them. Huh?
6. Why does the adult woman who runs the horror store hang out with children?

1997 Under Wraps:
1. Why is Marshall like the world’s most uncomfortable mashup of Michael J. Fox and Joe Pesci?
2. Why is Marshall’s mom such a fox?
3. Why is the score for this movie making me so emotional?
4. What is with the line “How can you respect a guy who’s seen the Olsen Twins movie twice?” Are they talking about It Takes Two?
5. Why is Amy wearing an Ice Cream Cookies shirt?
6. Why is there a dirty kid on the street carrying a blanket? Does he have a family?
7. Why does Amy say she sleeps in the nude? She’s in middle school! WTF, 1997 Under Wraps?
8. Why does the adult man who runs the horror store hang out with children?

Robyn: I'd agree with you that the remake was pretty good. It's not the worst kids movie that I've seen (high praise, I know)! But is it better than the original? Ehhh. I found that the original had a little extra… something. It felt like the kids were having more fun in the 1997 version. There was also a teasing/meanness between the three kids in the original that felt very real. Kids are jerks! I agree with your above observations, but if I could add a few of my own: 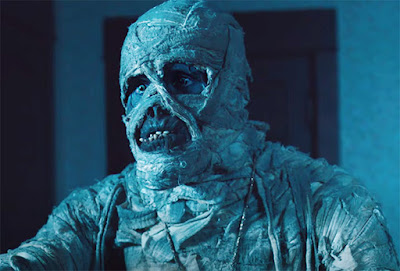 2021 Under Wraps:
1. The bad rich lady ate that octopus (or what I thought was sausage) in such a terrifying way. This is a kids movie!
2. Amy is set up as an investigative journalist in training. Is this so that she can happen to know every random fact that furthers the plot?
3. Why are they so judgy of the bully's sweet Cereal Killer costume? It was a good idea!
4. The mom's new boyfriend is very handsome and Marshall should treat him better.
5. The mummy movie that the kids make is very cute.
6. My favorite character is the kid working the Halloween fair at the end who is getting more and more upset about not getting to do his scary spiel.
7. And to reiterate your point - why does the shop owner hang out with 12 year olds?

1997 Under Wraps:
1. Amy is mean. I like it.
2. Is Gilbert in love with Amy? I think he is. This friend group is going to be a Dawson/Joey/Pacey situation once they're in high school.
3. The entire hospital sequence with Harold is pure insanity.
4. I really just appreciate all the time spent with Harold wandering the streets getting into his own shenanigans.
5. What is up with Gilbert's mom? I need an entire movie about her.
6. Mr. Kubot feels a lot more evil in the original - he sends an attack dog at a kid!
7. And again. Why is a grown adult shop owner hanging out with children?

Adam, thank you for watching both movies with me! I think you'd agree that readers should check out these movies during Scary Movie Month -- especially if they have kids!
Posted by Patrick Bromley at 5:00 AM