Noirvember 2021: Reporting from Week One 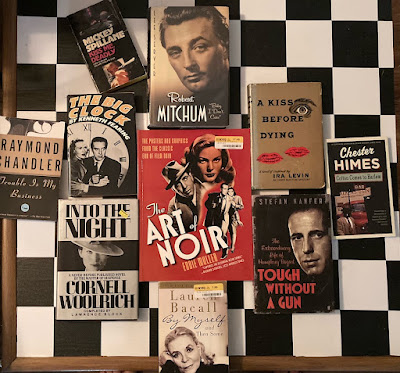 It’s arguably the best month of the year for noir fans: Noirvember! And already, I feel behind.

There’s always so much to watch and read and only so much free time in the day. One of these years, perhaps I can convince my real life job that watching movies is somehow work related, but this is not that year. Nonetheless, I have big plans for the rest of the month and even if I don’t get to everything on my list, I know that like every other year, I’ll make some discoveries of really cool movies and seedy under-seen gems. I’ve also embraced revisiting favorites this month, because they are classics for a reason.

I started the month with Key Largo, a movie I love so much that I have a light switch cover in my bedroom with the movie’s cover art. Edward G. Robinson, Humphrey Bogart, Lauren Bacall, Claire Trevor, and Lionel Barrymore are shacked up together in a hotel with fugitives on the loose and a hurricane brewing. You’ve got lots of drinking, crackling dialogue, and John Huston at the helm--what’s not to love? You, too, can enjoy this movie if you have a subscription to HBO Max (and probably rentable other places too). 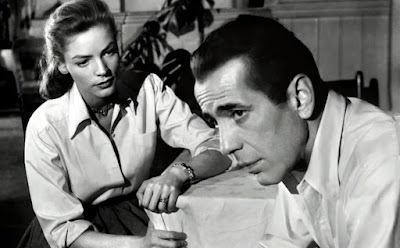 Next up, I had to satiate my Robert Mitchum lust so I popped over to the Criterion Channel, which has a whole slew of his films featured this month, and hit play on Angel Face, which has been on my watch list for some time now. Mitchum plays an ambulance driver who meets an alluring young woman (played by Jean Simmons, NOT the one from KISS) that may or may not be plotting her stepmother’s demise. I was especially blown away by the ending, which I will not give away here.

I took a slight detour into neo noir-adjacent with The Shadow, a movie that made me wish Alec Baldwin had been Batman at some point. The movie feels very much like a Batman film, with some really cool art deco and noir stylings but a lot of other elements that take it out of that genre. It’s like part Night at the Museum, part Dick Tracy, part The Sorcerer’s Apprentice... it doesn’t quite know what it wants to be. All that said, I think it gained momentum as it went along so if you make it through the first 20 minutes, you might be rewarded with a flawed but interesting viewing experience. 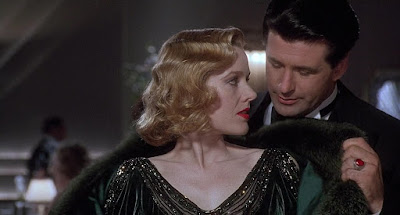 This year, I’m also adding some reading material to my Noirvember experience. I got pre-November start when I borrowed In a Lonely Place by Dorothy Hughes from my local library. The movie is one of my favorite noirs, and is super dark, but the book goes EVEN DARKER. I mean it does not hold back. Hughes was a very gifted writer, and the whole story is narrated from Dix Steele’s twisted perspective. I highly recommend it if you can get hold of a copy!

A non-fiction book I’m still working on is Baby, I Don’t Care by Lee Server. It’s a biography of Robert Mitchum, and one of the most fascinating, funny, revealing biographies I have ever read. If you’re a Mitchum fan, it’s a must-read. If you don’t know much about him, reading it will make you want to see every movie he ever made. So many juicy stories, so little time -- he was definitely a character on and off screen! Since I always have to be reading multiple books at once, I cracked open a Jim Thompson hard-boiled novel this weekend, After Dark, My Sweet. There’s a film version of this starring Jason Patric, which I plan to track down after I finish reading it.

I’m sure I won’t have time for much other reading, but if you’re looking for other recommendations here are a few others from my noir and classic Hollywood bookshelf worth seeking out:

The Art of Noir by Eddie Muller

This is a book of posters for noir films, including some rare ones and some international ones. It has little write ups about the movies too, but I mostly have it for the pictures. No shame in it! There’s nothing like a good noir poster.

A Kiss Before Dying by Ira Levin

I picked this one up at a book shop in Maine this summer, and haven’t opened it yet but I love the movie adaptation and I also love the other two movies I’ve seen based on Ira Levin books: Rosemary’s Baby and The Stepford Wives.
Cotton Comes to Harlem by Chester Himes

By Myself and Then Some by Lauren Bacall

Not exclusively about noir, of course, this memoir is charming, personal, and doesn’t shy away from the darker or more difficult chapters of Bacall’s life as a star in her own right as well as Bogey’s leading lady. I listened to the audiobook a few years ago, read by Bacall herself, and loved it.

Tough Without a Gun by Stefan Kanfer

Humphrey Bogart is one of my favorite actors and I love the title of this book, which is still waiting to be read by me. Most likely the first one I’ll pick up after I finish the Mitchum bio.

Into the Night by Cornell Woolrich

I’ve been meaning to check out Woolrich’s writing for some time -- he wrote stories and books under his given name and pseudonyms that inspired various movies and TV shows -- most famously, one of his stories served as the basis for Rear Window; he also wrote Phantom Lady and The Black Angel, which were adapted into film. This was his last book, and technically he died before it was finished so mystery writer Lawrence Block finished it.

Kiss Me Deadly by Mickey Spillane

Love the film, love the pulpy novel. The film is definitely better, but it’s fun reading the source material and learning just how much scuzziness was actually left out of it when this was adapted for the screen by A.I. Bezzerides and Robert Aldrich.

The Big Clock by Kenneth Fearing

The movie version is a favorite of mine; I picked this book up second hand and haven’t read it yet to see how the two compare. The author hails from Oak Park, Illinois, and is known for his poetry as well as his fiction.

Trouble Is My Business by Raymond Chandler
I mean, you have to have at least one Philip Marlowe story on the list, right? Chandler is a master who shaped noir, and I’m not familiar with this one so hopefully it’s worth checking out.

I promise to talk about more actual MOVIES in my next column, but I’d love to know: do you have a favorite hard boiled writer? What are you reading this month?
Posted by Patrick Bromley at 12:00 PM