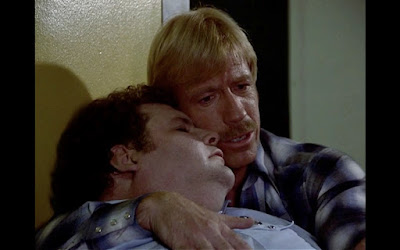 The light at the end of the 52/82 tunnel is a tiny pinhead of a spot, but I can see it. As I was rewatching film 37 it occurred to me that, if blessed enough to have the opportunity to write for F This Movie! for another year, maybe I should finally tackle my true love: '80s cop movies, aka Neon Badges (if you know you know). I hear you asking, “Why? We're waiting with bated breath. Do tell us, oh elusive Anthony, why, in fact, film 37 would elicit such memories of podcasts past?” Film 37, dear reader, is the Chuck Norris action/sci-fi/horror and, yes, '80s cop movie, Silent Rage. 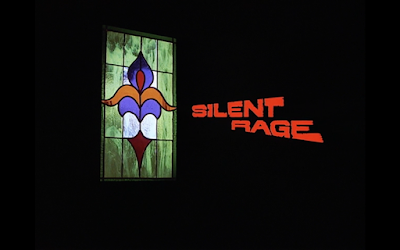 I first came across Silent Rage five years ago by accident. I was meaning to watch something else (what, I couldn't tell you now) and confused the titles up. Luckily for me I was thrown into a crazy Walker, Texas Ranger--Frankenstein--Halloween hybrid co-starring Flounder from Animal House. It is a movie that has lived in my brain ever since I first saw it, and it's one of the reasons my love of '80s cop movies has evolved into an obsession. Here we have blondie Chuck Norris rushing to the scene after a crazed husband and father named John Kirby takes an axe to his boarder and wife. After a stereotypical Chuck Norris fight scene within the first five minutes of the film, Kirby is arrested. But there's something different about this man, er, mutant. What we're witnessing is the origin story of a comic book villain, or possibly the effects of bath salts or PCP. While handcuffed in the back of a cruiser, Kirby rips his cuffs apart, kicks the door off, and proceeds to beat the hell out of half a dozen deputies before he's finally shot to death. But wait! This is a supervillain origin story. Which means (SPOILERS) he never dies (complete with Carrie ending). Kirby is taken to the hospital where Ron Silver operates on him, fails to save his life as we know it, and walks away, leaving him in the care of Steven Keats and William Finley in the Dr. Frankenstein and Igor roles, respectively. Like in Frankenstein, the monster escapes the lab, but in this version turns into Michael Myers who stalks Ron Silver in the Jamie Lee Curtis role (hello Blue Steel connection). Have I lost you yet? 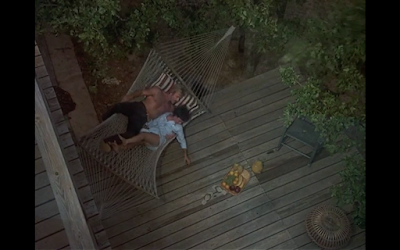 Stephen Furst acts as our misplaced and awkwardly-timed comic relief as Charlie, deputy to Norris' sheriff Dan (if ever there was a Dan, Norris is it). The comedy seems so out of place it's easy to forgive viewers' outbursts of, “What the fuck is going on here?” But, thanks to Furst, who was always a pleasure to watch in everything he appeared in, the comedy, while almost consistently out of place, is still very funny. The mash-up of action, horror, science fiction, and comedy is like filling a giant burlap sack with pots and pans and then smashing the full bag against a stone wall. It's almost painful at the beginning, but it all starts melting together with your brain and you end up with a beautiful mess that you wouldn't mind sitting through again and, in fact, becomes one of those movies you tell people, “You gotta see this!”
Posted by Patrick Bromley at 5:00 AM