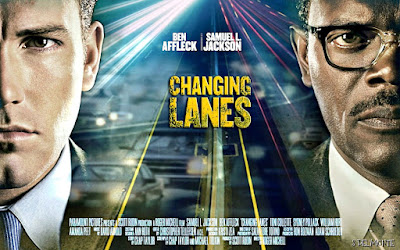 • Best Scene/Moment: The scene where Amanda Peet gives Ben Affleck a disturbingly calm monologue about how she demands that he lie, cheat and steal for them to maintain their privileged status/lifestyle.

• Best Song: An end credits cover by Annie Lennox of Bob Marley’s “Waiting in Vain.” The only other option was Ludwig van Beethoven’s “Ode to Joy,” which was one of the very few songs I knew how to play on the guitar because it didn’t require me to know chords. I was bad at guitar. 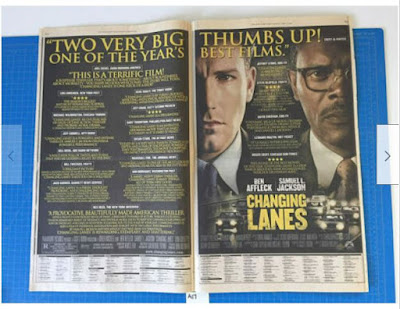 • Best Merch: A 2-page color newspaper ad for Changing Lanes from The New York Times for $18.99. I wish you could get at least the whole paper for that amount, but I guess beggars can’t be choosers. I miss the days when movies took out newspaper ads. You knew the movie was a big deal when they were in color and took up an entire page.

• Director Check: Changing Lanes was directed by Roger Michell. After beginning his career with some smaller films, he scored a big mainstream hit with 1999’s Notting Hill starring Julia Roberts and Hugh Grant. Michell followed up that film with Changing Lanes, which was critically acclaimed in 2002 and a modest success at the box office. Michell worked consistently throughout the rest of his career directing mid-budgeted studio fare like Morning Glory and indies such as Venus, Hyde Park on Hudson, and My Cousin Rachel. Michell sadly passed away in 2021 at the age of 65. His final film, The Duke, was delayed for release due to the pandemic. It is scheduled to come out in the UK this February. Now I feel like re-watching Morning Glory.

• Mall Movie? No. This is a mid-budgeted drama aimed at adults with A-list stars. It would play at the fancy theater in town. Also, it’s Paramount and The Mountain rarely made mall movies circa 2002 except for things like Jackass: The Movie.

• Only in 2002: The Paramount Pictures 90th anniversary studio logo that opens the movie. 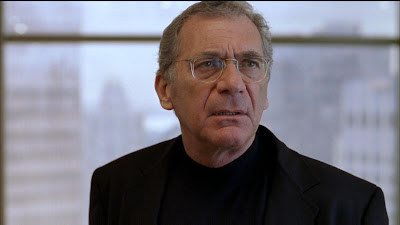 • Scene Stealer: The supporting cast is deep (Kim Staunton, Toni Collette, Richard Jenkins, Amanda Peet, William Hurt, Dylan Baker) so there’s a lot of options but it would be impossible not to choose Sydney Pollack, who’s playing a character very much in the same vein as his role in Eyes Wide Shut. Character actor Pollack was the best thing ever. 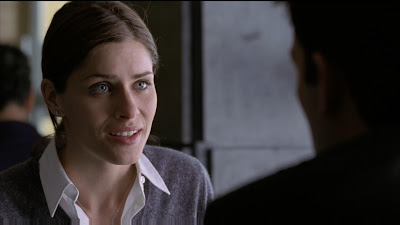 • What I Thought in 2002: I was all in on Changing Lanes. Roger Ebert’s 4-star review of the film piqued my interest in seeing it and it didn’t disappoint. I think some of my appreciation for the movie was me patting my 19-year-old self on the back for enjoying an adult drama, but nevertheless I thought the performances were uniformly great and the film’s moral dilemma to be very interesting.

• What I Think in 2022: It’s still a really good movie. Both Samuel L. Jackson and Ben Affleck give layered, compelling performances and setting the tone of the film as a thriller keeps the themes from becoming too preachy. It’s a rare parable (compared to nowadays) about choosing morality and empathy over wealth and convenience. This is the type of movie you could pick up at any scene on TV and watch through to the end. It’s just good scene after good scene.
Posted by Patrick Bromley at 5:00 AM