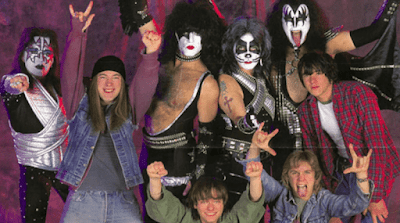 You wanted the best, you got the best!
KISS is my favorite band. I know this makes me a dork and calls my taste into question, but I gotta be me. No other music makes me as happy as theirs does. While they don't have the same musical or cinematic legacy of, say, The Beatles, there are a handful of films that celebrate the band that keeps me coming back to them again and again. You don't have to be a KISS fan to enjoy all of these, but it certainly helps.
1. Detroit Rock City (1999, dir. Adam Rifkin) 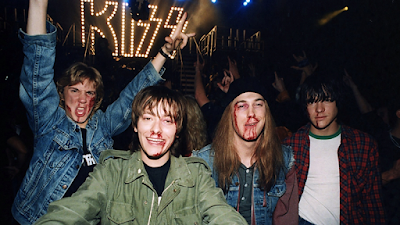 As a mega-fan of KISS and of director Adam Rifkin, this is a movie tailor-made for me. Four high school boys obsessed with KISS in 1978 do everything they can to see them in concert at Cobo Hall; much bathroom humor and puking ensues. Rifkin employs the same anarchic spirit that informs so much of his work, dialing it up to 11 to capture not just the late '70s sex, drugs, rock n' roll vibe, but also to pay tribute to the kinds of movies Allan Arkush used to make. KISS were actively involved in the film (Gene Simmons is a producer and Shannon Tweed has a supporting role), which culminates in a live performance by the band. Some of the lead turns -- like those by James DeBello and Edward Furlong -- are a little shouty and one-note, but the supporting cast is terrific and there's enough sweetness mixed in among all the partying to make this more than just a crass celebration of debauchery. The Blu-ray appears to be out of print, but the DVD (which includes KISS commentary!) can be picked up pretty cheap and it's available to rent or own digitally.
2. Role Models (2008, dir. David Wain) 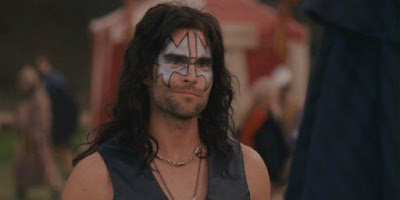 Director David Wain's major studio debut movie rules. The cast is great, the script is incredibly funny, and it focuses on one of my favorite themes: whether or not you want irony or sincerity to govern your life. The premise of the film -- two guys (Paul Rudd and Seann William Scott) are assigned to act as Big Brothers as part of a community service sentence -- is just the dressing onto which Wain hangs a bunch of other interests. Rudd begins the movie as a miserable cynic, a character with whom I identified with maybe more than any other movie character I had ever seen when this movie was released in 2008, I'm ashamed to admit. It's why my early writing on this site was a lot snarkier than I would like. I'm hoping I've learned a lot about the kind of writer and the kind of person I want to be in the last 12 years of F This Movie!. Through the course of the film, Rudd comes to appreciate and even unironically enjoy dorky stuff like LARPing and, yes, KISS. Their music and makeup play a major role in the movie's final act and Seann William Scott has one of the best and funniest explanations of their appeal ever.
3. Kiss Meets the Phantom of the Park (1978, dir. Gordon Hessler) 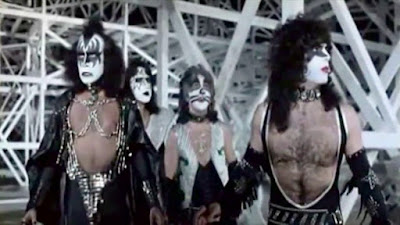 Sooner or later as a KISS fan, you have to pull the trigger and see this made for TV movie produced by Hanna-Barbera (it was released theatrically overseas as KISS in Attack of the Phantoms). The band has more or less disowned it and for good reason: it's pretty terrible, and the members seem all but openly miserable on screen (that is, when they're on screen; sometimes you can see Ace Frehley's Black stand-in appearing in his place). Despite this being a movie made explicitly to cash in on their popularity and the presence of the band's name in the title, they're not really in it enough for my liking. Most of the music, at least in the Attack of the Phantoms iteration (which is the only one commercially available on KISSology Vol. 2), comes not from the KISS catalogue but rather the four solo albums the band members individually released in 1978. When the band does appear, it's supremely goofy. There are a couple of live performances of actual KISS songs that are fun (including an alternate version of "Hotter Than Hell" called "Rip and Destroy"), but the movie overall is really poorly made and dull when the band isn't playing. Of course I still like watching it. I'm hopeless.
4. Why Him? (2016, dir. John Hamburg) 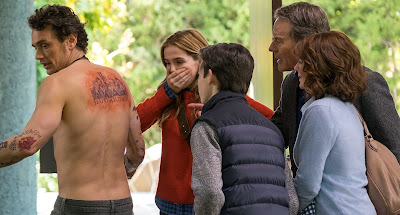 I skipped this movie back in 2016 because I thought the trailer was bad and the title was dumb, but it's a sneaky good comedy that's actually about characters and communication rather than stupid misunderstandings and deception (mostly). Obviously it's hard to talk about now that James Franco has been canceled, so please don't take this endorsement of the movie as an endorsement of his off-screen behavior, whatever that might have been. And, of course, if I had known about the KISS connection I would have seen it a lot sooner. They're positioned as Bryan Cranston and Megan Mullaley's favorite band early on and a couple of their songs play on the soundtrack, but I won't spoil the best KISS gag in the third act that makes it a must-see for fans. This movie was such a pleasant surprise in so many ways.
5. Scooby-Doo and KISS: Rock and Roll Mystery (2015, dir. Spike Brandt and Tony Cervone) 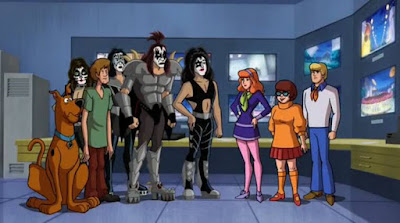 The reunion of KISS and Hanna-Barbera in the form of a Scooby-Doo cartoon makes so much sense that it's hard to believe it took until 2015 for it to actually happen. The gang is hired to solve a mystery at a theme park called KISS World, assisted by the band themselves. Like Phantom of the Park, Rock and Roll Mystery positions the band as actual superheroes from outer space; the less grounded and Earth-bound the movie gets, the more tedious it becomes at times. That said, it's still a total blast; of all the movies on this list, this animated feature is probably the most satisfying as a KISS fan if only because it's so full of music, in-jokes (like the band's willingness to merchandise anything and everything, a running gag throughout the film), and vocal performances from the band themselves. Old-school KISS lovers may bristle at the inclusion of current members Tommy Thayer and Eric Singer as the Spaceman and the Catman, respectively, but even though I have a favorite lineup, I'm not picky about any incarnation of the band...which is good, because there have been a lot of them.
Posted by Patrick Bromley at 5:00 AM