2K Replay: CATCH ME IF YOU CAN 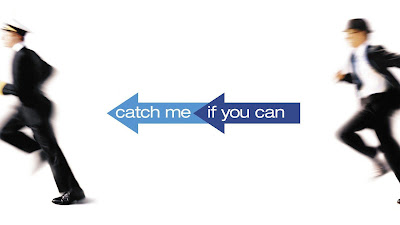 Winner for “Choice Movie Liar” (Leonardo DiCaprio) at the Teen Choice Awards. How is this a real thing?

• Best Song: The score by John Williams is fantastic, but I have to go with “Come Fly with Me” by Frank Sinatra. 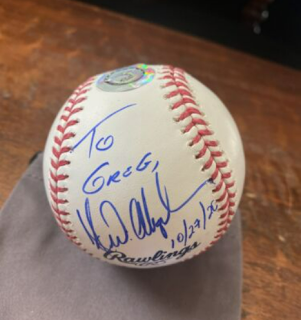 • Best Merch: A Frank Abagnale signed baseball (?) for $199.00. Other than Christopher Walken’s character making a passing reference in the movie to the Yankees uniforms, I’m not quite sure why anyone would think to get Frank Abagnale to sign a baseball of all things. It comes with a Certificate of Authenticity, so it can’t be like the guy bumped into Abagnale at a game and all he had for him to sign was a baseball. This was premeditated. The funniest part of the whole thing to me is the ball is personalized “To Greg.” So, if you’re buying this, I hope it’s for someone in your life named Greg.

• Director Check: Catch Me If You Can was a breezy movie and a departure for director Steven Spielberg from his other DreamWorks fare up to this point, which included Amistad, Saving Private Ryan, and A.I. Artificial Intelligence. Just like in 1989, 1993 1997, and later 2005 and 2011, Spielberg directed two films in 2002: first the Tom Cruise sci-fi thriller Minority Report and then Catch Me If You Can. Both were successful critically and financially and have gone on to be well-regarded over time. Spielberg followed up Catch Me If You Can with 2004’s The Terminal, which was a bit of a disappointment across the board. I kind of like The Terminal but it’s certainly no Catch Me If You Can. Since the early 2000s, Spielberg has interchanged between blockbusters (War of the Worlds, Indiana Jones and the Kingdom of the Crystal Skull) and awards-friendly dramas (Lincoln, Bridge of Spies). He most recently directed a remake of the classic musical West Side Story and will be back in late 2022 with a semi-autobiographical coming-of-age drama titled The Fabelmans, starring Michelle Williams, Paul Dano, and Seth Rogen.

• Double It with This 2002 Movie: Minority Report

• Year 2002 Movies to Trailer Before It: Die Another Day, Gangs of New York, Road to Perdition 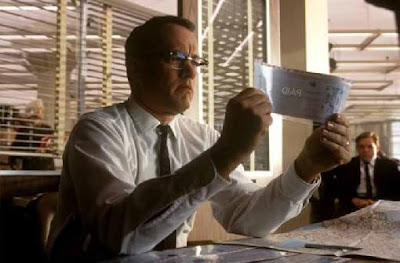 • Mall Movie? Nope. This was a high-profile Christmas Day release with a lot of pedigree (Spielberg, DiCaprio, Hanks). It would play at the fancy theater in town.

• Only in 2002: Paper check fetishization. They look so good!

• Scene Stealer (tie): Christopher Walken (who should have won for Best Supporting Actor at the Oscars that year) and Amy Adams.

• I Don’t Miss (tie): The DreamWorks Pictures studio bumper. It’s not so much the visuals or the music on their own but together it’s insufferable. Also, Janusz Kaminski’s light shining through a window cinematography. I feel like he’s toned that down a little in recent years. 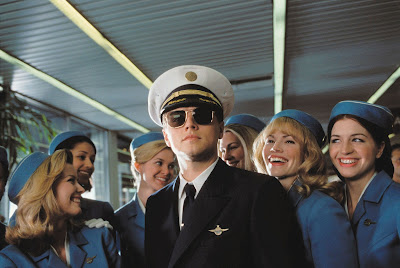 • What I Thought in 2002: I couldn’t have been more excited to see Catch Me If You Can when it was released on Christmas Day 2002. I remember thinking (before seeing the trailer) that it was going to be a serious crime thriller like Heat and was surprised to learn that it’s a nimble dramatic comedy. I loved the movie when I saw it but it’s one that’s grown on me even more over the years. I think the film was considered slight compared to the other prestige contenders in 2002, but comparatively Catch Me If You Can has had longer legs and better re-watchability over the past 20 years.

• What I Think in 2022: Catch Me If You Can remains one of my favorite movies of the 2000s and one of my top 5 Spielberg movies (only behind Jaws, Jurassic Park and Raiders of the Lost Ark and just ahead of Saving Private Ryan). Both Leonardo DiCaprio and Tom Hanks give performances that are among their career best, both playing somewhat against type. At the time, DiCaprio hadn’t given a maximum charm/comedic performance like this before (unless you count The Quick and the Dead or Titanic) which is where I feel he excels, and Hanks plays his role in a way that dims his charismatic movie star wattage (although you can’t completely cover that up because he’s such an icon). This movie’s extremely fun and melancholy in just the right amounts. It’s a perfect example of a comfort watch.
Posted by Patrick Bromley at 5:00 AM