I'll Watch Anything: IT TAKES TWO 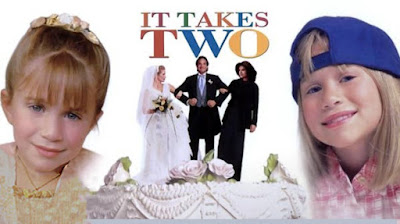 After 27 years I can finally say that I’ve seen this.

I wanted to see It Takes Two pretty badly back when it was released in November 1995. It definitely wasn’t cool for me to share this feeling, as I was in 8th grade and I felt pretty confident that none of my friends would go with me to see it. It was better to play it safe and see Goldeneye, Ace Ventura: When Nature Calls, or even Toy Story. Those I could easily explain, unlike It Takes Two. This predicament caused me a fair amount of cinematic anxiety. See, here’s the thing, I was a huge fan of the show Full House for nearly a decade at that point and the thought that I wasn’t going to support Mary-Kate and Ashley Olsen during their shot at theatrical film stardom just seemed disrespectful. 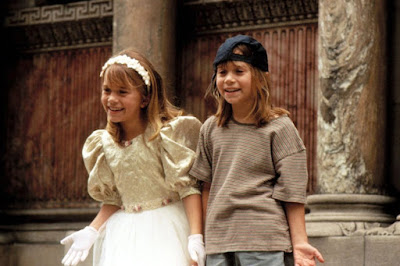 The movie looked solid, too, with fading ‘80s comedy stalwarts Kirstie Alley and Steven Guttenberg lending support to the twins. The film was directed by Andy Tennant in his feature debut (before blowing the roof off of the romantic comedy genre with 1997’s Matthew Perry vehicle Fools Rush In), and from a commercial standpoint the Olsen Twins starting out with a riff on The Parent Trap and The Prince and the Pauper just seemed like money in the bank. It Takes Two came and went in theaters pretty quickly and wound up as a clamshell VHS with dubious cover art. By that point I had cooled on ever seeing the film (if I made it through the theatrical run with no issue, why not its home video release?) and then put it out of my mind until recently when I saw it was available through HBO Max.

The other night I sat on the couch and finally pressed play on It Takes Two and guess what? It’s totally fine. Mary Kate Olsen plays Amanda, the street-smart orphan who lives in a home run (not baseball, like a home that’s run by someone) by social worker Diane (Alley). Ashley Olsen plays Alyssa, the well-mannered rich kid daughter of cell phone magnate Steve Guttenberg. Upset by the upcoming nuptials between her dad and a gold-digging socialite (played by Friends’ Jane Sibbett), Alyssa runs off to the nearby summer camp being visited by the orphans and gets mistaken for Amanda. Amanda is mistaken by Alyssa after a game of ding-dong-ditch lands Amanda on the front door of Guttenberg’s mansion. Eventually the two girls run into each other (literally if I remember correctly) and convince each other that they should try to get Alley and Guttenberg together whilst kicking Sibbett to the curb. The film co-stars Phillip Bosco as Guttenberg’s butler. He’s playing the Hector Elizondo role. There’s s’mores, there’s slingshots, there’s horses, there’s food fights, there’s jumps in the lake etc. The movie has everything a growing cinephile needs.

Let’s talk about the Olsen Twins for a second. Their acting trickery as Michelle on Full House never allowed me to really separate one from the other in terms of their acting. They knew the character of Michelle Tanner like Kenneth Branagh knows Hamlet. In It Takes Two, it becomes clear that while both are charming actors, Mary-Kate is the one with the goods. We’re introduced to Amanda playing stickball, wearing a backwards Yankees cap (because orphan) and all the other kids are like “Aye, fucka you” while Mary-Kate is all “NO! FUCKA YOU!” I’m kidding, but that’s kind of the vibe. She’s a pint-sized David Caruso. Ashley Olsen seems like she has less to prove, but that could be the prim and proper character she’s playing. I dunno. The Olsen Twins are pretty gifted is what I’m trying to say. 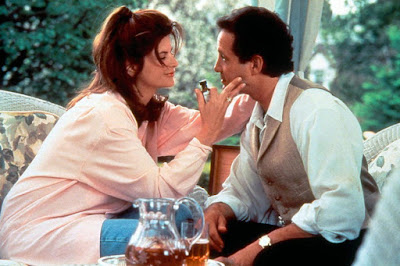 I don’t know where this column is going so I’ll just wrap with this: when I worked at Blockbuster Video in high school, I remember we had one rental copy of the Olsen Twins film Passport to Paris. It was always out of stock. I wondered if it was out of stock all the time because we only had one copy or because it was that popular. Like, if we had 30 copies would all of those be out the door too? I’ll never know. I remember Blockbuster made Passport to Paris a previously viewed tape about six months later (the one and only copy) and I was like “I dunno, HQ…have you seen how this thing has rented in the trailing two quarters?”

So yeah, you should watch It Takes Two I guess is what I’m saying. It’s from Rysher Entertainment, the production company that was also behind Turbulence and Kiss the Girls. Weird.
Posted by Patrick Bromley at 5:00 AM