Review: YOU WON'T BE ALONE 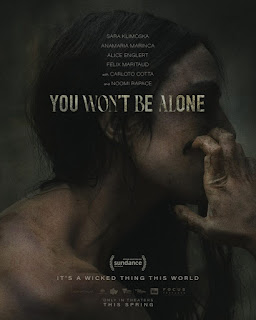 To call Australian writer/director Goran Stolevski’s You Won’t Be Alone a supernatural horror film feels more than a bit misleading. Though it shares tonal and aesthetic qualities with the likes of Robert Eggers’ The Witch and Ari Aster’s Midsommar, Stolevski’s approach to what we’ve taken to calling “folk horror” is far more subdued — his coming-of-age witch story is gauzier, warmer, and more empathetic than those cousins, sharing perhaps the most in common with Johnathan Glazer’s Under the Skin. It’s certainly one of the more narratively challenging films of the genre, a story in which a single cutaway might convey months of passing time and a narrator’s voice may not resemble the physical body they’re occupying at any given moment. Though the scares are few and far between — again, it’s more supernatural drama than horror — You Won’t Be Alone knows exactly how and when to get gory, presenting some truly gnarly images that are sure to stick with those willing to wade through the film’s deliberately-paced waters long enough to see them unfold. 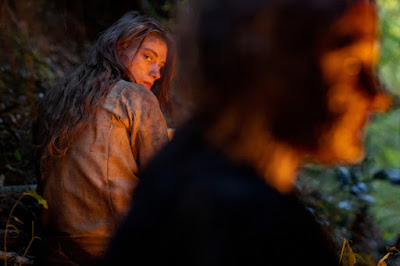 Set in 19th-century Macedonia (with a spoken language to match), You Won’t Be Alone begins when a terrified mother sacrifices her infant daughter to Old Maid Maria (Anamaria Marinca), a malignant entity with jagged black nails and crusted-over skin that will remind horror hounds immediately of Freddy Krueger. Old Maid Maria has been haunting the countryside for generations, it seems, a living embodiment of rage and jealousy who curses young women to a lifetime in the Dark Prince’s servitude. Her latest victim is Nevena (Sara Kilmoska, at least at first), who grows from the aforementioned infant into a mute, feral sixteen-year-old girl with rotted teeth and a thirst for blood. Once freed from her subterranean prison, Nevena roams the interconnected villages for the first time, finally getting to see other human beings who live and work in harmony. After accidentally killing one of them (a blink-and-you’ll-miss-her Noomi Rapace as Bosilka), Nevena takes over Bosilka’s physical body by tearing out her internal organs and merging them with her own.

It’s here that You Won’t Be Alone’s central conceit is revealed: Nevena can live any number of lives — young, old, male, female — simply by using her blood-and-guts black magic to take over her body of choice. They’re the lives she never got to live growing up in that pit all alone, small and fleeting glimpses into the worlds of people she’ll never truly get to be. Killing and possessing her would-be rapist, Nevena sees the double standards inherent in a patriarchal society. Embodying a young girl who took an accidental fall off a cliff, Nevena finally gets to experience a mother’s love and the truly blissful innocence of childhood. Her transformations are less calculated decisions than they are haphazard discoveries; she’s stumbling through life the way we all do, trying to make logical sense of a cruel and illogical world. It’s torturous, of course, and Nevena’s quiet voice-over narration reveals an unending oscillation between hope and despair (“and yet…” becomes a common refrain in her darker, more pessimistic moments), which crescendos after the birth of her own child. 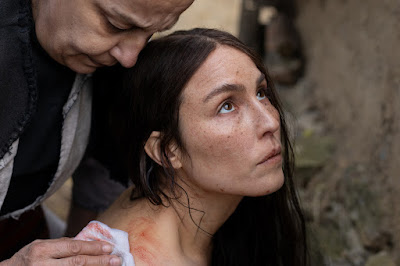 Framed in a boxy Academy aspect ratio and stitched together in puzzling, often enigmatic vignettes, Goran Stolevski’s debut feature is most certainly not for everyone, least of all those looking for the vibrant energy found in some of the more recent crunchy, certified-organic horror offerings. You Won’t Be Alone is slow, contemplative, and often uncomfortably intimate, but it’s a risky mix of storytelling modes that rewards careful attention: Though she’s introduced as a child of darkness, Nevena’s killings don’t feel like jealous acts of outrageous fury. Instead, they often feel like acts of charity, as if Nevena is taking on the earthly burdens of people who cannot handle them on their own. Even Old Maid Maria — introduced as a striking specter of death — gradually becomes a pathetic, lamentable figure as Nevena gains more agency and perspective. By using her dark powers to learn and grow, to experience true ecstasy and anguish, Nevena grows wiser than Maria — whom we get to know better in flashbacks to her horrible past — ever got to be. 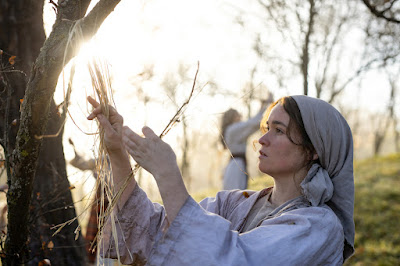 In the end, You Won’t Be Alone is both hard to recommend and impossible to ignore. It’s a thoroughly engaging and universal coming-of-age story that seems to only come of age upon reflection, when we’ve sorted through the puzzle pieces and finally seen the whole picture. Even those who speak fluent Macedonian will have to lean in closely to make sense of Nevena’s disconnected musings, and despite the film boasting its fair share of captivating performances — most notably Marinca as the grotesque Maria — an immediate re-watch will be a daunting proposition for most viewers. Those with the fortitude to parse through the subtleties, however, will find a deceptively heartwarming drama underneath the staid, arthouse trappings. It rumbles with a low drone that will eventually become oddly musical, almost as if things are coming into focus just as awkwardly for us as they are for our body-hopping protagonist. You Won’t Be Alone is the best kind of slow burn, in fact: The kind that smolders for hours on end long after the fire itself has died.

You Won’t Be Alone hits select theaters on April 1st.
Posted by Patrick Bromley at 5:00 AM