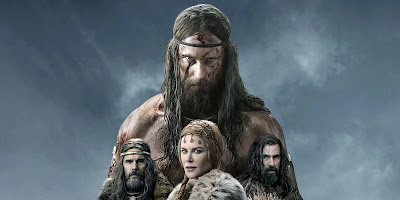 Praise be to the Allfather.

In the opening sequence of Robert Eggers’ The Northman, Viking King Aurvandill (Ethan Hawke) submits his young son (Oscar Novak as Amleth) to a ritualistic ceremony of beastial indulgence — barking, growling, and farting — while psychedelic visions race before his eyes. In those visions, Amleth sees his father’s death, his future as a righteous king, and his rise to glory in Valhalla. He sees through space and time, through light and darkness. Supervised by a shrieking mystic who cackles with perverse delight (Willem Dafoe, obviously), the ritual will test his mettle and determine if he has the makings of a true king. If this is too much for you — If blood-soaked chants and animal sacrifices aren’t your jam — it’s best to turn away now. It’s only going to get trippier and more esoteric from here. Those who stick around, however, will witness indie auteur Eggers’ (The Witch, The Lighthouse) first true epic, a sprawling romance and revenge story drawing from eons of mythological traditions that widens the director’s scope without sacrificing his signature style. 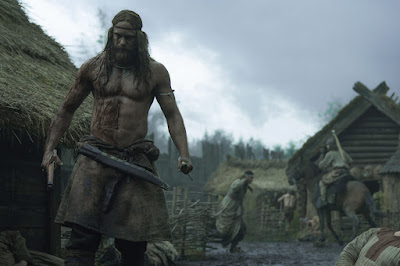 Set in the North Atlantic circa 900 AD, The Northman begins in earnest when Aurvandill is betrayed and murdered by his brother Fjölnir (Claes Bang), who takes the throne and queen (Nicole Kidman as Gudrún) for himself. Though he swears revenge when fleeing, young Amleth instead grows into a hulking ravager (Alexander Skarsgård) so cold and heartless that only more haunting visions — this time from Björk as an eyeless witch — can return him to his soul’s ultimate destiny. Stowing aboard a slave ship bound for his former kingdom, he encounters the beautiful sorceress Olga of the Birch Forest (Anya Taylor-Joy), and together they are taken in chains to Fjölnir’s settlement. Neither Fjölnir — deposed by another power-hungry king and now acting as a rural chieftain — nor his mother Gudrùn recognize him, giving Amleth the necessary time to plot his revenge. As his bond with Olga grows stronger, Amleth stalks the countryside under the cover of night, using the ancient tactics of his forefathers to chip away at Fjölnir’s power and reclaim his birthright.

Though The Northman is undoubtedly Eggers’ most sprawling and complex film to date, it also retains his eye for character and nuance: Action sequences are often framed in longer takes that give us enough space to see the beats in-between, the human awkwardness and desperation of hand-to-hand combat. The drama is behavioral, as well, since Amleth’s tendency toward silence tells us just as much as other mens’ need to bloviate and proclaim. With all that said, The Northman is also an unabashed assault on the senses. In shaping Amleth’s quest for justice, Eggars and co-writer Sjón embrace Norse myth and ritual with such visual grace and intensity that we can’t help but feel his religious fervor as he belts out guttural chants and butchers hapless guards. Even his romance with Olga presents like an epic poem; Their first love scene is bathed in forest moonlight, with Olga praying over their union with such passion that we’re sure their bond is eternal. The Northman is most definitely grody, vicious, and blood-thirsty, but it’s also remarkably delicate and beautiful.

Still, Eggers is far too astute a filmmaker to waste time and energy on a conventional story of righteous indignation. Amleth’s journey isn’t truly defined by his revenge. His is a journey of temperance, a struggle to find a balance between the centering power of anger and the vulnerability of love. Our Northman is a headstrong warrior bred to be an instrument of death, but we’re never sure that his is an unequivocally noble path or that Fjölnir and his family deserve to die for their sins against him. When he finally reveals himself to Gudrún, his mother makes a few revelations of her own and — in the film’s most shocking moment — shatters Amleth’s perception of himself and the grand purpose he was meant to serve. From there, he has a choice: Does he join Olga in a life of terrestrial harmony, or does he double-down on the instincts ingrained in him from birth, the flame-forged codes of masculinity and power that have defined his people for generations? You can probably guess where this goes. No? I’ll just tell you: It goes to the top of a fucking volcano. 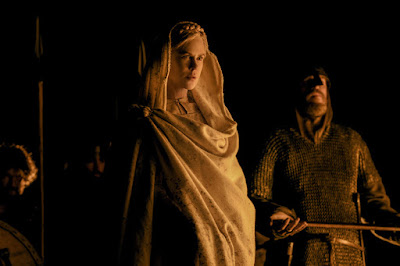 With his third major feature, Robert Eggers has cemented himself as a master craftsman, a filmmaker committed to humanizing figures of history who have become abstracted by myth and legend. If The Northman stumbles at all, it’s when his attention to those character details butts up against his story concerns, grinding the narrative gears here and there in ways that can feel frustrating when we’re dying to get to the next ferocious battle or Technicolor hallucination. That’s the level of energy — the pure inertia — created by The Northman’s best moments. Led by the brawny and enigmatic Skarsgård, Eggers’ company of actors imbues his vision with brilliant texture and more than a few moments of dark humor. Taylor-Joy, especially, is growing into her now-familiar role as an ethereal being of porcelain poise, an almost alien force to be reckoned with. Audiences may find themselves missing Nicole Kidman for long stretches, but her Big Scene left my audience aghast. Like everything in The Northman, it’s a bit of an endurance test, but one well worth the effort.
Posted by Patrick Bromley at 12:00 PM