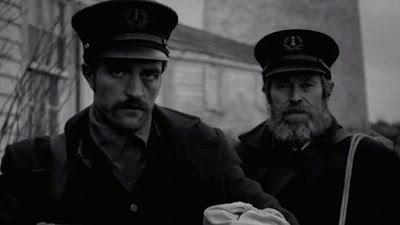 Foghorns and farts and mermaid sex, oh my!

Squeezed within the edges of a cramped, 1.19:1 aspect ratio and captured on black-and-white 35 millimeter film, Robert Eggers’ The Lighthouse feels at first like an obnoxious escalation of the themes and style established in his breakthrough feature, 2015’s The Witch. The trailer reads like A24 with the gloves off — uber douchebaggery of the highest order. And it doesn’t lie: like many eagerly anticipated follow-ups (Jordan Peele’s Us comes to mind), Eggers’ sophomore effort is riskier and more ambitious than his first. It’s also (like Us) far less accessible than its predecessor, an idiosyncratic tone poem of madness that revels in the kind of pretension and inscrutability that would have made it unfilmable if not for its creators’ aforementioned success. It is those things, there’s no doubt. But it’s also more. Co-written with Max Eggers and photographed in exquisite chiaroscuro by Jarin Blaschke, The Lighthouse might be most succinctly described as the raucous marriage of F. W. Murneau’s Nosferatu to David Lynch’s Eraserhead. If that sounds like your jam, read on. 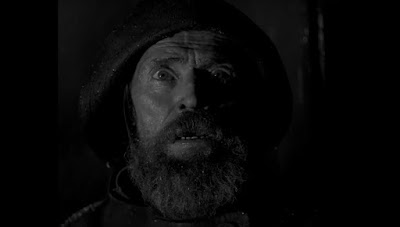 Days into their month-long residency as caretakers of a remote New England lighthouse, The Wickie (Willem Dafoe) and The Lad (Robert Pattinson) — real names withheld for spoilery reasons — are finding themselves already at odds. The Wickie is a stern taskmaster, constantly berating The Lad for his slow pace of work and inattention to detail. The Lad takes his lashes quietly; a man of few words, he toils through the first weeks of backbreaking labor with little protest. But what does he want? What brought him to a place that feels barely hospitable, even by 19th century standards? We’re not sure, but The Lad soldiers on, finding small comfort in the odd cigarette and a few minutes alone with a voluptuous figurine found in his quarters. He’s no rube, though, and he soon begins to ask questions of his own: What drove The Wickie’s former assistant away? Why do the island’s seagulls seem to be taunting him? What does The Wickie see when he stares into the gigantic light at the top of the staircase every night?

It’s only by following The Lad and The Wickie into the depths of metaphysical hell that we get our answers. Like The Witch before it, The Lighthouse is a claustrophobic period piece driven by revelatory lead performances and staged with the kind of delicate care that makes it feel almost otherworldly. Willem Dafoe’s face was made to be lit by nautical candlelight, and Blaschke’s palette beautifully accents his oscillations between jovial scallywag and deranged lunatic. Robert Pattinson continues to distance himself from his heartthrob roots with yet another genuine, affecting, and sympathetic turn. His Lad is just as dangerous and unstable as The Wickie, we soon discover, but the veneer of stability is more pronounced. We share his disgust, his frustration, his apathy, and then — so quickly that we almost fail to realize it — his confusion and horror. While Dafoe steals his share of scenes, this is Pattinson’s film. 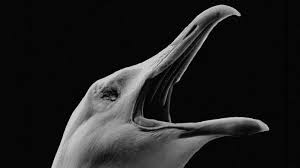 But it’s also a formalist exercise, a beautiful showcase for Eggers’ vertical composition and (I have no choice but to mention) Lovecraftian imagery. You’ll get your fair share of mermaid labia and tentacle torture, don’t you worry. The real star, though, is Mark Korven’s sound design, which evokes David Lynch and Herman Melville in equal measure. The fog horns and wave splashes are stark and invasive at first, but as The Lad adjusts, so do we. Before we know it, they’ve become lullabies, familiar comforts that let us know we still have some semblance of sanity on which to stand. But Eggers soon takes that from us, too, inviting us into his characters’ madness as we lose track of where the score ends and the fog horns and seagulls begin. By the end, everything has melted into a dull drone that will almost certainly give you a headache. But it works. It’s beautiful, really, and it all closes with a primal scream that will push the boundaries of your home theater system for years to come. 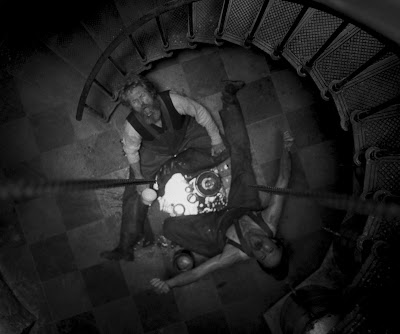 The Lighthouse pushes different buttons than The Witch does, and devoted fans of the latter may find themselves overwhelmed by the former. It’s broader, more guttural. It’s interested in different things. It’s not as clean or as patient. Like its predecessor, though, The Lighthouse is about frustration and restriction. Wonder and chaos. Punishment and loss. Like Ari Aster (Hereditary, Midsommar), Robert Eggers is establishing himself as a defining voice in modern horror by pushing his audiences beyond our genre comfort zones, by mixing and matching the folk with the baroque, the romantic with the obscene. Call it “Elevated Horror” if you want (though it’ll earn you a dirty look from me), but The Lighthouse is a world-class reminder of why we embrace the genre in the first place, a bold display of form and function so old-fashioned that it’ll seem almost experimental. Except for all the farting. That’s just fun.
Posted by Patrick Bromley at 12:00 PM