I think most of us would agree that Halloween is the best holiday. It’s all about cool monsters and scary stuff and horror movies, you get candy, and it doesn’t involve getting together with family members. This is why Halloween will always have Christmas beat.

As much as I delight in fall colors, the smell of burning leaves, and pumpkin spiced everything, there are a few… ahem… problems with this most joyous season that I would like to share with my readers in the hope of exorcising them from my tortured psyche. See if you agree with any of these.

#1: Horror Fans Who Use Their Knowledge and Love of the Genre to Hide the Fact that in Reality They are Douche Nozzles. 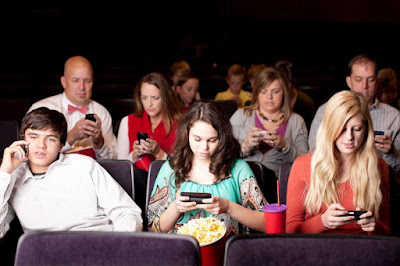 If you follow me on the Twitter machine (and you should), you know that, in October, my account is run by Mister Pumpey, a pumpkin-shaped, sentient candy dish who comments on the season and everything else on my… I mean, ITS… mind. Having missed two local horror marathons because of previous engagements, Mr. Pumpey attended a brand new horror marathon last Saturday at the great, old Catlow Theater in Barrington, Illinois. For the five hours that Mr. Pumpey was there, he witnessed every kind of bad behavior we have come to both expect and hate from certain horror fans. And he tweeted all about it! “Even though, as a candy dish, you have no thumbs,” you point out? STOP PESTERING MR. PUMPEY WITH YOUR INSANE QUESTIONS.

In a previous life, I was a high-school teacher, and I always said that the world’s worst students were teachers. Visit any educator-centric workshop, graduate class, or training session and you will find teachers exhibiting every single behavior that they themselves cannot stand in their students. Talking in class? Check. Texting? You betcha. Falling asleep? Yup. Checking e-mail/social media/stock reports/weather apps? Absolutely! Many teachers seem to feel they are above common courtesy when someone ELSE is teaching. Perhaps because they are teachers, they (counter-intuitively) feel that this fact alone automatically makes them the best students, without a shred of effort.

The same is true of many horror fans attending horror screenings. While at the Catlow Theater, Mr. Pumpey witnessed a full menu of atrocious behavior, all from people who profess to love horror and had paid good money to be there. One woman kept Googling actors in the film, then turning to her spouse to deliver a mini-lecture on the actor’s career, shouting interesting facts from IMDb and Wikipedia while the film was playing. Mr. Pumpey asked her to please put away her phone because this was distracting; she complied for two and a half minutes before continuing her stint as Professor Loudy McWikifacts. Mr. Pumpey rolled into the darkness to find another seat. 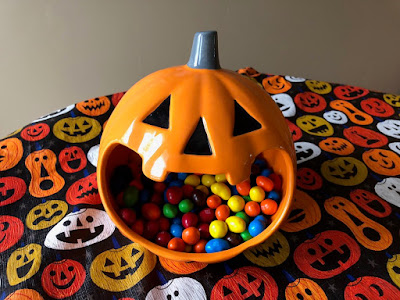 The new seat lasted for about an hour, until some shadowy figures (the likes of whom Mr. P had often seen at the Music Box Massacre) sneaky-snuck in. Although the theater contained hundreds of empty seats, they chose seats directly behind Pumpey, cracked open some beers, and launched into the world’s longest and least-funny amateur MST3K session. During the short time Mr. Pumpey sat there, the closest they ever came to a joke was an observation near the end of Spider Baby about the character Virginia: “She has boobs.” How sophisticated! Mr. Pumpey thought for a moment he might have stumbled into the Algonquin Round Table! A bit later, these inebriated miscreants began shouting to each other “IT’S NOT THAT SPICY” until a chagrined Mr. Pumpey got up again to find another seat.

Pumpmeister’s third seat was within earshot of a neatly dressed, middle-aged gentleman who found it necessary to read out loud any words on the screen.

Night of the Living Dead began, and he orated clearly and confidently—to no one in particular—“Image Ten Presents,” then “Cemetery Entrance,” then “Chrysler,” and so on. Mr. Pumpey scratched his pumpkin noggin (“But thumbs…?” you ask, to which I reply “Stifle yourself.”) and wondered if this was some strange mental condition—perhaps a tragic form of echolalia or Tourette’s. No matter, Mr. Pumpey decided to leave. Later Mr. Pumpey tweeted that there the behavior of those supposed horror fans explained why some humans murder each other.

Do horror fans feel this self-imposed status gives them license to act however they want in the theater BEAUSE THEY LOVE THESE FILMS SO MUCH? The mind (and the candy dish) reels.

Another form of this behavior? The loud, ironic laughter of “knowing” fans trying to turn everything into a joke for their own superior hipster amusement. I once sat through a screening of Hitchcock’s The Birds where audience members guffawed through the scene of… school children being attacked by murder-birds. Small children getting hurt? Comedy gold, apparently! Hey, Joe Cool, don’t be scared to actually be SCARED. #ScaringIsCaring 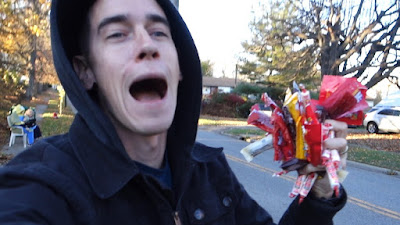 We were watching the David S. Pumpkins Halloween Special at Patrick’s house the other night for the kid-friendly part of Scary Movie Night. I had forgotten that the nominal “plot” of this non-sequiter-filled confection involves middle-school bullies stealing other children’s Halloween candy.

That actually happened to me in seventh grade. I went trick-or-treating with my friend Art, we walked up to a dark house where no one was home, and we turned to find our way blocked by three hulking older kids toting BB guns and smoking real cigars. “Give us your candy,” they hissed. We did. Art started to cry. The bullies laughed. I had just dropped my first hour’s worth of candy at home because my bag was getting too heavy; Art had not. We went back to my house, and I gave him half of mine. That was almost fifty years ago, and I still remember it like it was yesterday. What a shit-shit-shitty thing to do. I can only hope those three boys died of painful genital accidents and currently reside in Hell, writhing in eternal damnation. (Even though I attended Catholic school, I never really learned that “forgiveness” thing.) If you’re reading this and candy-stealing sounds fun to you, you’re a monster. Not the fun kind, the real kind.

By the way, this peeve is NOT about teens who still want to trick-or-treat. I don’t care how old you are, Kid: If you’re wearing a costume and you ring my doorbell on October 31, You. Will. Get. Candy. That’s my promise to you. #CandyPromise 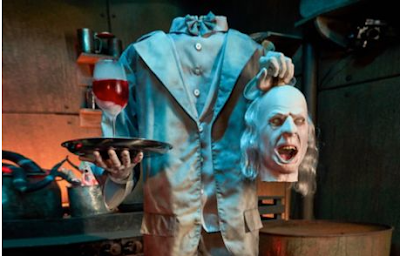 I’m tired of the outrageous prices for items that are not well-designed or well-manufactured. Just because a piece of décor is only going to be displayed for one month a year doesn’t mean it should be shoddy. Cursed by a gypsy? Sure, that’s just Halloween fun. But cheaply-made? BAH!

Now, I live a comfortable life in a modest home crammed with anthropomorphic candy dishes, so maybe this is just the annoying quibbling of a feeble mind… but $200+ for a “Stabby Pete” dummy made of coat hangers and calico rags is outrageous. I own a life-sized Old Witch figure from Snow White and the Seven Dwarfs and it is reasonably sturdy. I think that is only because Spirit Halloween SuperStore licensed those rights from the Walt Disney Company, which does a good job making sure their licensees produce quality products. Last year, I purchased a 6-foot inflatable Frankenstein’s Monster that simply would not hold air. Nothing is less scary than a softly farting monster bowing its head in shame. I have friends who own life-sized figures that seem to just fit some legal definition of “décor” or “item” or “thing,” but just barely.

C’mon, Spirit! You’re a subsidiary of Party City! Put just a few more dollars into design, manufacture, or materials and give us items that justify your eye-gouging prices. Oooooooh, how about a new proprietary figure called “The Eye Gouger?” #GougeEyesNotCustomers #DoNotGougeBoth 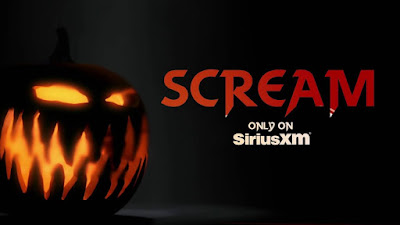 No one loves Halloween more than I do, so at the beginning of October I gleefully visited the Google machine to learn about the Halloween Channel this year on the Sirius Satellite Radio in my car.

Hmmmm. There’s a channel called “Scream” that you can listen to all month long, but only if you have a radio from Sirius’s sister company XM. Damn it… Oh, here it is! During the week of Halloween, “Scream” is available to Sirius subscribers on Channel 123, but there is an asterisk. I follow the asterisk to the bottom of the page and learn that the “channel is not available on all radios.” The next time I’m in my car I tune to channel 123, and I am told that it is an invalid channel. Da fuh? I’ve been a subscriber for twelve years. Sirius has dozens of channels of commercial-free music—I know, because I pay for them. Yet there are only a few paltry hours of programming I can enjoy on Halloween, the day that I’m LEAST likely to be in my car because I am home manning the front door (see #CandyPromise.) Multiple channels of Christmas music play 24/7 for the entire month of December! But as a Halloween fan, I am shit out of luck. Fuck you, Sirius Satellite Radio! I hope someone eggs your transmitter. There’s plenty of Halloween music out there! #MyMyPumpkinPie

Do YOU have a Halloween pet peeve? Take a deep breath and a Fun-Sized Snickers, and share it in the comments section below.
Posted by Patrick Bromley at 5:00 AM