#10 – Snow White and the Seven Dwarfs

How terrific is Snow White and the Seven Dwarfs? Sergei Eisenstein (Yes, the Battleship Potemkin guy) called it “the greatest film ever made.” How groundbreaking is this movie as the first feature-length cartoon? Some people at the time thought that humans could not sit through a cartoon if it were longer than ten minutes. I do not know what these naysayers thought would happen upon the eleventh minute of viewing animation: Bleeding eyeballs? Mild nausea? Madness? Discomfiting discharge? Fatal case of “the whimsies?”

There, the Pope is now officially the first critic to mention the beloved Snow White and the Seven Dwarfs in the same sentence as “discomfiting discharge.” 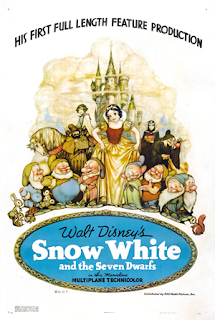 The Plot In Brief: An evil Queen thinks she is the fairest in the land. She has an acolyte in the form of a Magic Mirror who tells her that she is the fairest on a pretty much daily basis. Then one fateful day Snow White, a delightful young lady and friend to small animals, is suddenly judged to be the fairest. This is somewhat contentious because even though the Evil Queen won the Electoral College, Snow White won the popular vote. The evil Queen loses her shit and orders Snow White killed.

The poor huntsman given this dirty job is a bleeding-heart liberal who opposes the death penalty. He takes pity on Snow White and sets her free in the forest. (Presumably he believes that dainty princess/bluebird-whisperer Snow White has had extensive outdoor survival training, and will somehow prevail.) Snow White befriends some forest creatures and eventually comes upon a little cottage. 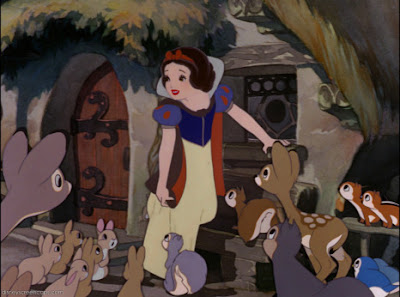 The cottage belongs to the titular dwarfs (I keep wondering if Walt Disney deliberately misspelled “dwarves” so that he might copyright the term.) The dwarfs find Snow White charming and invite her in. She quickly improves their lives: she cleans their house, she makes them food, and she shows them how to bathe. With their chances of being right-swiped on their Tinder profiles greatly improved, the dwarfs become quite attached to Snow White. The Wicked Queen, meanwhile, learns of the huntsman’s subterfuge and vows to take guaranteed health insurance away from the dwarfs. (Actually it’s been a while since I have screened this one; this plot summary may not be 100% accurate.)

The animation here is without peer. At the time, Disney was famous for scrapping weeks of animation if it was not up to his high standard. In fact, this feature project was so close to his heart that, during the meeting in which he introduced Snow White and the Seven Dwarfs to his animation team, Walt acted out the entire story, playing all the parts himself, over the course of ninety minutes. I love Walt. 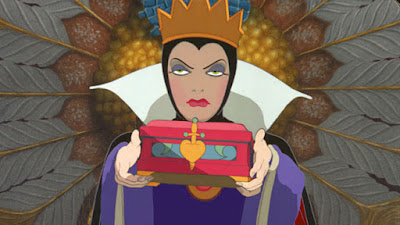 As we would come to expect from future Disney features, the songs are tuneful and catchy; highlights include “Some Day My Prince Will Come,” “Whistle While You Work,” and the now iconic “Heigh Ho.” In fact, John Lennon wrote the Beatles’ song “Do You Want To Know A Secret?” after seeing Snow White. He was inspired by the Snow White song “I’m Wishing,” and originally wrote the lyrics, “Do you want to know a secret? Do you promise not to tell… standing by a wishing well?” The Pope is not making this up.

Even Popes like to have fun—and I like to play “The Dwarf Game!” I cannot be the only one who, after screening the film, enjoys making up names for dwarfs who did not quite make it into the movie. Disney and his animators wound up choosing the iconic seven’s names from a much longer list that originally included such memorable monikers as Baldy, Burpee, Dizzy, Gabby, Jumpy, Lazy, Nifty, Puffy, Shorty, Sniffy, Stuffy, Swifty, Tubby, and Wheezy. So dive in and make up your own B-List! 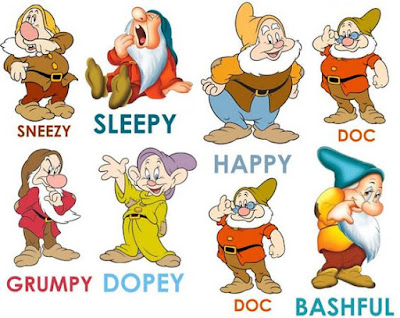 Post your favorite “also-ran” dwarfs in the comments section below.

AN ANNOYING AUTOBIOGRAPHICAL PAUSE: I am old enough to still remember when the Disney organization had its classic animated features on a seven-year theatrical re-release schedule. In the days before home video, Disney realized that, about every seven years, nature would provide a new, untapped audience of children who had never seen these wonderful movies on the big screen. Thanks to that program, I got to see Snow White, Pinocchio, Fantasia, Dumbo, Bambi, and other early classics in an honest-to-God movie theater. I treasure those memories and wish Disney would bring this program back. Parents need an alternative if the only movie for kids on a given weekend is The Secret Life of Pets! What parent would not instead opt for the original Lady and the Tramp, Jungle Book, or even The Fox and the Hound?

Listen up, Disney. There is money to be made. 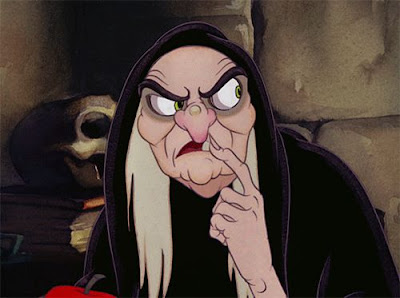 Snow White’s Three Miracles: A perfectly realized fairy-tale narrative with a plucky heroine, terrific comic relief, and one of the greatest villains in movie history; animation that represented a huge leap forward from Disney’s previous “Silly Symphony” shorts; and a wonderful message for children—two of the most important things in life are empathy and friendship.