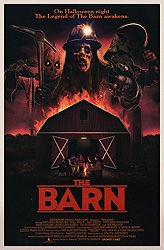 That poster is the best thing about this movie. That's not a knock on the film. It's just that the poster is really, really great.

Writer/director Justin Seaman's The Barn is the newest latest (to me) indie horror movie that exists to fetishize the 1980s in every way, from the aesthetics to the effects to even some members of the cast. It's the kind of film that, like 2015's Lost After Dark and last year's Secret Santa, exists less to pay tribute to '80s horror than to slavishly recreate it, all imitation and not inspiration. And yet despite being part of what I see as a depressing trend in indie horror, The Barn is charming and fun and one of the best examples of its type that I've seen. Taken on its own, I enjoyed the movie. Taken as part of a growing fad, I feel like I'm over it. 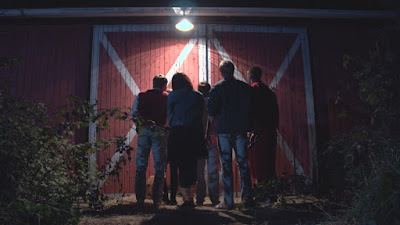 Based on a story that the Pennsylvania-based Seaman wrote when he was eight years old, The Barn tells the legend of three demonic spirits -- The Boogeyman, Candycorn Scarecrow and Hallowed Jack -- who awaken from within an old barn on Halloween night 1989 and terrorize a town. When a group of kids stop in town on their way to a concert, they come face to face with the monsters and best friends Sam (Mitchell Musolino) and Josh (Will Stout) must follow the rules of their favorite holiday to win back the night.

There's a lot that The Barn has going for it. The movie is heavy with Halloween atmosphere and a real love for the mythology of the holiday, going so far as to create its own legends to correspond with the night; each of the three monsters represents a different aspect of Halloween and feel like real stories we might have heard as kids. That Halloween vibe is probably my favorite thing about the film and is the reason I may return to it in future Octobers, as it's clear just how much affection the filmmakers have for the Most Wonderful Time of the Year. Director Seaman tries to approximate the look of an '80s horror movie without going overboard on post-production scratches or gimmicky "missing reel" bullshit (it was funny in Grindhouse and never again). The occasional cigarette burn is visible from time to time, but it's hard to hold that against the movie when Mike Flanagan did the exact same thing in Ouija: Origin of Evil just a few months back. There's some synth score, but it's never overdone; most of the music in the is metal that's not entirely period accurate. The practical gore effects are fun, particularly during one mid-movie slaughter that piles one gag on top of another. Hell, even a cameo by First Jason himself Ari Lehman manages to be super fun, with the gloved one appearing as the host of a late night video show with an opening credits sequence that's hilariously spot-on. 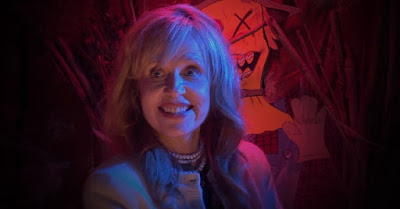 Linnea Quigley also appears in a single-scene cameo as an uppity religious woman who doesn't like all this glorification of Halloween, and her sequence points to a big part of my issue with The Barn. It's not Quigley. She's fine, and it's always fun to see her getting work. It's the way the scene is edited so that it feels like it takes twice as long as it needs to. This is a recurring concern in the movie, which only runs 90 minutes but when drags much more often than it should. There's a shapelessness to the narrative that makes it confusing as to when certain things are taking place; after a prologue, The Barn cuts to a sequence in which kids are trick or treating, only to reveal that it's actually the night before Halloween. It introduces the "let's go to a concert" conceit, but then there's a stopover in a town and a trip to the barn and then back to the town and all sense of time is pretty much lost. The movie feels flabby on a macro and a micro level, with a story that moves in fits and starts and scenes that are in need of tighter editing. 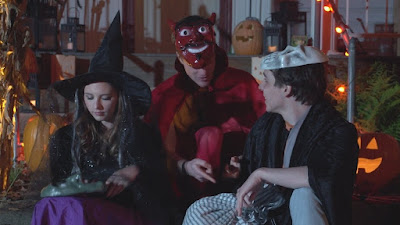 Allow me this digression. I keep thinking we have reached peak nostalgia, but then something comes along to prove me wrong and suggest that the movement shows no signs of slowing. There are movies I've really liked (such as last year's The Mind's Eye or even Beyond the Gates) that have a heavy '80s influence because the new generation of indie horror directors were raised on those movies, but they're also movies that feel like new works created by original voices interested in making something good. Other indie horror films I've seen of late (I won't say which ones, as there's no point in calling them out by name) appear content to rest on recreating the '80s aesthetic and use it as an excuse to make a shitty movie because, well, some of those early '80s horror movies were shitty. So now we're creating nostalgia for something we don't even necessarily like, but have fondness for because...we saw it when we were kids? Or didn't see it when we were kids, but it came out at the same time as other movies we liked as kids? As someone who is not immune to the allure of nostalgia, I'm genuinely trying to understand this phenomenon.

The Barn is taking things several steps further, as the nostalgia doesn't end with the film itself. It has become part of all of the marketing and even merchandising around the movie (made possible by a hugely successful Indiegogo campaign), which offers big box VHS copies of the film, the soundtrack album on vinyl and cassette tape (retro!), a board game, vinyl Halloween masks, old school-style The Barn action figures and an 8-bit video game. The glorification of the '80s has become its own little cottage industry as far as The Barn is concerned, and I bring this up not to damn the film or the filmmakers (this is all separate from the movie itself), but to question where the breaking point will be. Is trading in on things that are old a sustainable business model? There are communities of people who fetishize VHS, not because it's the only way to see certain movies (it still is) but because of how it looks and sounds, this despite the fact that it is an inferior format in every single measurable way. I'm guessing there are also people who prefer 8-bit video games to anything on their PS4s. So we're no longer selling a movie that feels retro, but recapturing the entire experience of what it was to be an '80s kid. This is not the way to create art that is new or exciting. This is not the way we move forward. 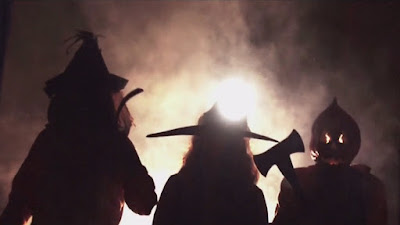 Again, The Barn is not really the problem here. It may be symptomatic of the problem, but at least it's a pretty good symptom. The movie is more or less successful in achieving its goals; it has a fun Halloween vibe and the monsters are cool new creations. It genuinely means well and feels free of cynicism. At the same time, I don't know if it's a movie I can revisit all that often, having gotten most of what I'm going to get from it on a single viewing. As approximations go, this one's enjoyable. But if I want to recapture the feeling of watching an '80s horror movie, I've got shelves full of the real deal here at home.