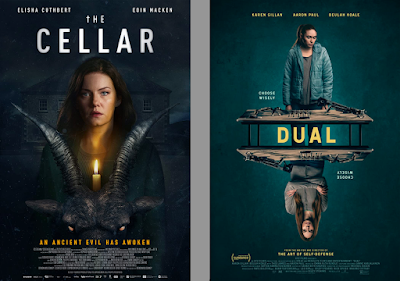 Two indies fresh from Sundance. One is good!

“I’ve seen horror movies,” says The Cellar with a brash overconfidence common to high school football stars and Hollywood development executives. “There’s nothing to them. You get a pretty lady (Elisha Cuthbert) and you put her in a haunted house. It’s like a big, spooky house and there’s weird stuff on the walls. And there’s this one door that’s locked. Or maybe it’s not locked, but it’s mysterious, you know? And she goes through it and…wait. No. She has a daughter (Abby Fitz), and it’s the daughter who goes through the door. Yeah, so she has a husband (Eoin Macken) and like a weird son (Dylan Fitzmaurice Brady) and the daughter goes through the door and it leads to like a portal or something. Remember Poltergeist? Right? So the daughter goes through the door to the creepy dimension. But it’s like a science thing. Who’s the guy with the cat, again? Schrodinger! So, say it was his house, and it’s the cat thing, you know? And the mom has to go through the door to get the daughter back. And we call it The Cellar. Because that’s where the door goes. See? It’s easy.” 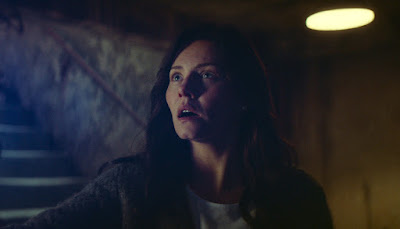 No, The Cellar, you sparkling dumbass. It isn’t easy. It’s incredibly difficult, actually, and the soulless, Mad Libs imitation of a horror film you’ve presented here does little more than waste everyone’s time and energy. You can’t just copy Insidious’ homework on the bus and expect no one to notice that you don’t actually have any idea what it means. You can’t just draw spooky ghost faces on a cement wall and expect Elisha Cuthbert to convey genuine agony and terror at the mere sight of them. You can’t just throw a bombastic orchestral track over close-ups of a teenage girl walking down a flight of steps and expect us to be on the edge of our seats. “See, but we hired a nerdy guy (Aaron Monaghan) to play a math scientist or whatever,” it protests. “See, there are these creepy equations on the walls in like, I don’t know, Hebrew or something, and the mom goes to the university and asks the math nerd about them. So it’s a mystery, you know? Like, it’s scientific!” Shut up, you knob. No one gave you permission to hijack my review. You’ve done more than enough damage.

Anyway, The Cellar is the kind of low-budget wallpaper movie designed to give streaming outlets like Shudder the appearance of a more comprehensive catalog. It warms a spot on the bottom row of your local Redbox, sitting idly as entire legions of Liam Neeson shoot-em-ups pass it by. There’s absolutely nothing of substance to The Cellar, really, and save for one or two mildly-ambitious set pieces at the end, I would have believed you if you’d told me it was made up entirely of B-roll from another movie, the bits shaved off in editing to make room for more plot and characterization. Why do bland horror movies like The Cellar feel so much more offensive than bland comedies or dramas? Maybe it’s because we think of indie horror as a place for innovation, a place where up-and-coming creatives can show us the things that are keeping them up at night, images and ideas we’ve never thought of before. There’s nothing here to keep us up, though, and while I’m sure The Cellar’s mother thinks it’s very handsome, that doesn’t give it an excuse to act like this.

The Cellar comes to theaters and Shudder (told you) on April 15th. 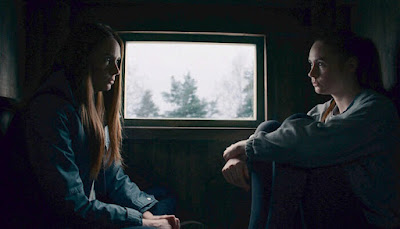 Faring far better is The Art of Self-Defense writer/director Riley Stearns, whose new science fiction dramedy Dual stars Karen Gillan as Sarah, a terminally-ill woman who undergoes a cloning procedure — common in this slightly-futuristic world — intended to spare her family and friends the pain of her loss. Like all clones created for this purpose, Sarah’s double (also Gillan, obviously) will spend as much time with her original as possible, learning the ins and outs of her life so intimately that the transition between them will essentially be seamless (Sarah doesn’t even plan on telling her mother, played by Maija Pauino, that she was ever sick). Ten months later, however — well after her boyfriend Peter (Beulah Koale) has started dating her double — Sarah learns that her illness has gone into remission. She’ll live, it seems, but New Sarah isn’t going down quietly: The law mandates that a double may challenge their original to a duel, with the winner carrying on alone. Sarah agrees, enlisting the help of self-defense expert Trent (Aaron Paul) to prepare.

Fans of Riley Stearns’ previous work will feel right at home with Dual, which mixes his patented arch comedy and stilted, prosaic dialogue as deftly as anything else in his repertoire. There’s something off about Sarah from the beginning, we think (“Why aren’t I crying?” she asks after receiving her diagnosis), but then there’s something off about everyone in this world, a strange tendency toward the literal that starts off funny but becomes oddly comforting as the film progresses. Gillan is wonderful in the dual role (pun absolutely intended) and manages to layer pockets of real character and nuance under Sarah’s stone-faced demeanor. Aaron Paul appears just briefly, but his probing question — “Do you actually want to win this duel?” — comes at an important time in Sarah’s journey. She could easily let New Sarah take over the life she’s felt so detached from for so long. She could give up. Peter prefers the double, anyway — “Her voice rises when she says my name. Yours does not.” — But there’s a principle at stake here. It’s a shitty life, but it’s Sarah’s.

The longer Dual goes on, the more we can appreciate the high-wire act Stearns is performing with his tone: There’s no winking, no Napoleon Dynamite-style buffoonery. We never approach camp or even the absurd surrealism of Yorgos Lanthimos (to whom Stearns is often compared). Instead, the film relies on an oozing, often uncomfortable subtlety that eventually grows into a cutting criticism of the posturing we do for the sake of those around us, the ways we’re expected to accept the clusterfuck of our reality with grace while, internally, all we want to do is scream. It leads to some of Dual’s best deadpan comedy moments (One exchange between Sarahs about a sexual relationship between doubles caught me so off-guard I had to pause and rewind), but it also leads to clever bits of existential terror (Is our Sarah really the original Sarah? Is anyone the original anyone?). Side-stepping cliche at every turn, Stearns builds to a moment of revelation reminding us that all the shiny new doubles in the world won’t change what’s broken on the inside.

Dual hits theaters on April 15th.
Posted by Patrick Bromley at 5:00 AM