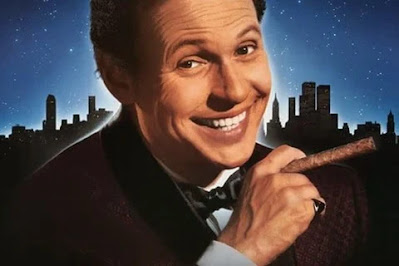 I could focus the entire It’s Time series just on “grown up” movies made in 1992. I was 10 years old at the time but a savvy kid when it came to movies. I was watching Siskel & Ebert weekly, reading the Entertainment sections of my local newspapers, and hearing commentary from the adults in my family about many of the PG-13 or R-rated films of the day. I was very aware of the conversation of all films back in the early 1990s. Because of this, I would become fascinated just as much by a project like Mr. Saturday Night as I was the summer blockbusters or kid movies of the day like Batman Returns or Home Alone 2: Lost in New York. Mr. Saturday Night is the movie you only get to make if you’re killing it in your career and making a lot of the powers that be happy monetarily (in this case it was Billy Crystal’s late '80s-early '90s run at Columbia Pictures). Luckily for Crystal, he was finally able to bring his character of Buddy Young Jr. (a character he was workshopping in the 1980s) to the screen after the significant successes When Harry Met Sally… and City Slickers. 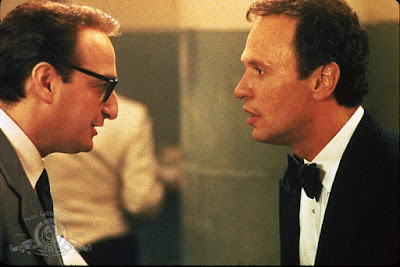 The appeal of Mr. Saturday Night, even when I was a kid, was three-fold: a) it’s a vanity project and star vehicle and I grew up in the age where being a movie star still meant a lot to moviegoers, b) it’s a rise and fall (and rise again?) story of an entertainer sort of similar to the trajectory of an addiction drama, which I’ve always found myself drawn to and c) it’s an incisive look into the world of a stand-up comic, the light side/the dark side and how the two blend together to make comedy what it is for better and for worse. There’s ample material in Mr. Saturday Night to make it a fascinating movie in the right hands. I’m not sure why it took me 30 years to finally take the dive and watch this movie. Even though he’s had his share of bombs and disappointments, I’ve always been a fan of Billy Crystal as a comedian and as a screen presence. There’s a certain ordinary quality to him that I find appealing. Also, for someone who comes across mainly as a dorky Jewish guy (I say this as a dorky Jewish guy myself) he can turn it up and be believably cool in a movie like Running Scared or masculine and suave in When Harry Met Sally… He has tricks that can play with his standard persona which is one reason why I appreciate Billy Crystal as an actor.

Mr. Saturday Night is an exploration of Jewish humor as much as it's about the bumpy road in the life of a standup comedian. Jewish humor is very self-deprecating and complaint based. It comes across largely as negative ("kvetching" in Yiddish terms) and the function is it’s supposed to bond the comedian with the audience (we’re not so dissimilar) or make the audience feel better (at least I don’t have it as bad as that guy). It’s like the scene in Jaws where Robert Shaw and Richard Dreyfuss compare scars except here it’s with punchlines. My pain is my scar and me showing it to you is my flex. I’m strong and I persevered, and I want you to know I’ve amplified something that once made me lower status into an element I conquered and turned into higher status.

In addition to that, Mr. Saturday Night slyly critiques the types of grinder stand-up comics like Buddy Young Jr. who maybe didn’t have the big break of their peers (like a Jerry Lewis and Don Rickles) because they thought they were better than they really were. I love the detail in Mr. Saturday Night that we realize Crystal’s character is repeating jokes and bits decade after decade and expecting to always get the same laughs he did when the material was fresh and new. Buddy Young Jr.’s problem (besides being a prick when it comes to his life and career) is that his material is stale and he refuses to innovate. 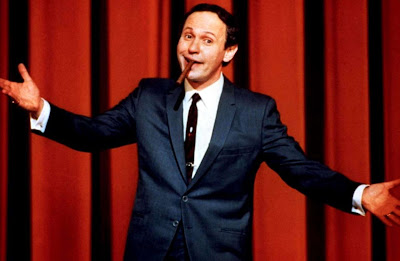 Mr. Saturday Night works best in its dramatic moments and less so comedically (although that might be by design). The humor only mildly works because a lot of it is punching down at targets (e.g., crowd work which is almost always uncomfortable for me and I think serves the stand-up who’s floundering more than the presumably supportive audience now made their comedic fodder), but where the movie shines is in the interpersonal relationships. I give Billy Crystal a lot of credit (as an actor, producer, and co-writer) for realizing that Buddy Young Jr. is an unlikeable character and using the people closest in his life as a mirror to his destructive behavior. The best of these characters is Stan, played wonderfully by David Paymer (who was nominated for Best Supporting Actor for his work in this film), who’s Buddy’s older brother and long-suffering manager/agent.

I think Mr. Saturday Night got a bum rap over the years because it was conceived as a prestige Oscar play and it never took off in that manner. After all these years I was hoping for it to be a fascinating relic of another time and an incisive character study, and I think the film succeeds at both. I miss the days where an actor could build up equity with a studio and cash in his/her chips on a project this personal. You never have any doubt this is a story Billy Crystal was burning to tell. It’s also a case of an entertainer telling a story in the milieu they know best. Crystal had an ear for stand-up comedy of not just his generation but of his predecessors and understood the cultural and religious blueprints of the truth in the comedy exhibited by the Buddy Young Jr.’s of the world who hustled gigs in the Catskills, Vegas nightclubs, and cruise ships for so long.

This is one of the most fascinating 3 out of 4-star movies you could ever watch. I’m glad I finally saw Mr. Saturday Night and now want to see the stage musical currently playing in New York starring Crystal and Paymer returning to their roles.
Posted by Patrick Bromley at 5:00 AM