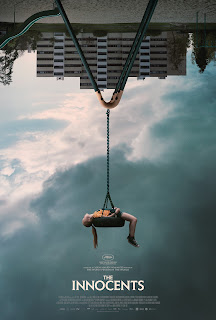 Or: The Worst Children in the World.

Eskil Vogt’s The Innocents opens on seven-year-old Ida (Rakel Lenora Fløttum) waking up from a nap in the back of her parents’ car. As the road ahead comes into focus, Ida hears a familiar sound: Her autistic sister Anna’s (Alva Brynsmo Ramstad) rhythmic whimpering. It’s the only real sound Anna can make, the only way she can communicate with the world around her. While that’s sad for Anna, it’s more than a little irritating to Ida, who casts an eye roll her sister’s way and gives her a perfunctory pinch on the thigh. As usual, there’s no response. Anna doesn’t feel it, Ida thinks. She doesn’t feel pain. She’s not a person, even. She’s an obstacle. An annoyance. A roadblock to her parents’ attention. As they pull up to their new apartment building, Ida surveys the barren playground and resigns herself to more loneliness and neglect. Anna doesn’t mean to monopolize her parents’ time, but that doesn’t matter when you’re seven. Ida can’t be expected to be rational or empathetic, to recognize humanity in others. Those are the emotions of adulthood. Ida is a child. 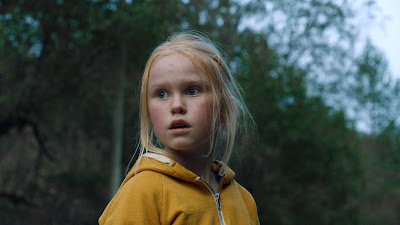 So is Ben (Sam Ashraf), who lives in the same apartment complex and is the frequent target of local bullies. After impressing Ida by moving a bottle cap with his mind, Ben leads them on a series of adolescent misadventures that eventually involve neighbor Aisha (Mina Yasmin Bremseth Asheim), a lonely girl whose skin is patched with vitiligo. Aisha’s ability to read minds immediately connects her with Anna, who — to Ida’s surprise and dismay — is fully aware of her surroundings and able to communicate with Aisha’s help. As the summer days stretch on, the kids develop a telekinetic bond that lets them keep playtime going long after the street lights come on and their parents call them inside for dinner. It all starts innocently enough, but a gravity experiment with a stray cat reveals a rage in Ben that he gradually feels less and less compelled to contain. Soon, that bottle cap starts snapping faster. Next, he’s breaking branches, choking his friends, and — with enough focus — possessing others and compelling them to take deadly revenge on his bullies.

The sophomore feature effort from Eskil Vogt (co-writer of 2021’s best film, The Worst Person in the World), The Innocents is a chilling glimpse into childhood that showcases his tendency toward subtlety and nuance over excessive exposition and dramatic outbursts. Unlike other entries in the “creepy kid” genre, The Innocents lives up to its name: Ida and her friends may do terrible things, but they’re still just kids. Their motivations are human and pure. They’re playing. They’re experimenting. They’re testing boundaries and tasting freedom. What happens if I toss a paper airplane onto an active highway? How far can I climb up this tree before I’m too scared to continue? What sound would this cat’s neck make if I snapped it? Think carefully: How different is that last one when you’re young, when your moral compass is not yet developed and you haven’t had to deal with consequences for transgressive acts? What shapes that morality in the first place? Is it our parents? Our peers? How do we learn right from wrong if we don’t raise a little hell? 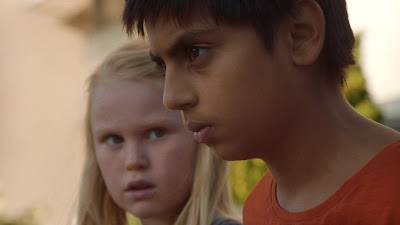 It’s that attention to perspective that makes The Innocents feel more like Eighth Grade than Children of the Corn. Though Ida’s parents (Ellen Dorrit Petersen and Morten Svartveit) do their best — and Petersen’s realization that her autistic daughter can talk is one of the film’s most heart-wrenching scenes — Vogt keeps the adults as peripheral as possible, focusing instead on the complicated mix of emotions, ambitions, and social insecurities that come with growing up. Vogt and cinematographer Sturla Brandth Grøvlen keep their camera at child height and stage scenes that emphasize the narrowness of apartment hallways and the freedom of the playground’s wide open spaces. It’s a refreshing approach that reminds us how terrifying it once was just to ask our parents to go outside or to challenge a friend when they’re doing something we know will get us in trouble. Though Ida has a solipsistic streak that will feel grating in the film’s opening movements, she soon develops a barometer for justice and virtue that makes her as brave as any superhero. 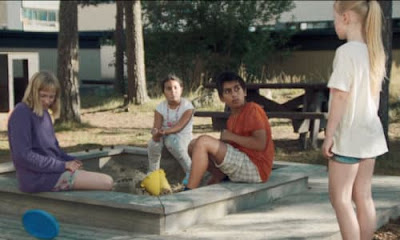 There are small bits to quibble about here and there — The Innocents feels long for its length and bails on some psychological horror imagery that a more sure-handed genre filmmaker may have leaned into — but its storytelling and young cast are both so compelling that it’s hard to argue with any particular decision. There’s something haunted about each and every one of these kids, something that sets them apart from the Disney stars trained to find their light and go big. Each actor brings a different flavor of latchkey kid to the table: Fløttem embraces spite, Ashraf coils anger, and Asheim struggles to keep a quiet dignity. However, it’s Ramstad — who is not autistic — who delivers the film’s key performance. Her Anna is the group’s Rosetta Stone, someone through whom their collective energy flows the strongest. Vogt mercifully avoids using this transformation as an excuse to “cure” her condition for narrative convenience, but it does open a door between sisters that makes The Innocent’s One Crazy Summer the most important of their lives.

The Innocents is in select theaters and On Demand now.
Posted by Patrick Bromley at 5:00 AM