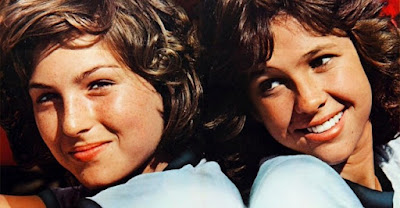 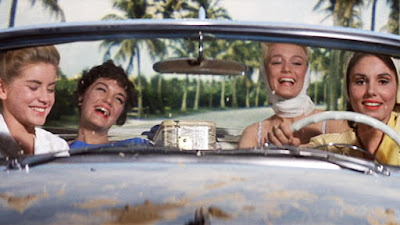 Merritt, Melanie,Tuggle, and Angie: learn their names and fall in love. If you're a fan of Zelda Barron's Shag, there's no doubt you'll love Where the Boys Are. Like the Frankie Avalon and Annette Funicello Beach movies and the aforementioned Shag, Where the Boys Are finds young adults looking for love and fun in the sun. While full of swinging fun, WtBA also explores darker territory as well, and because of that is the superior film about young adults letting loose in beachside towns. Starring Dolores Hart, Yvette Mimieux, Barbara Nichols, and Paula Prentiss with appearances by George Hamilton, Jim Hutton, and Frank Gorshin, this is an early version of the sex comedy that could easily be seen as the one that started it all.

Recommended to me by my friend Dan Pullen from the Movies from Hell podcast, this was a late addition to the list, and I'm so glad I saw it. Like many (or most) sex comedies, the subject matter is what the kids call “sus.” But, if you're participating in Junesploitation, and particularly sex comedy day, my hunch is you're willing to accept these movies for what they are. Here we have four college seniors who enlist the help of their scientist friend and open a fake sex clinic whereby college girls sign up to get paid for having sex with these gentlemen. We're also treated to Dennis Quaid in one of his first movie roles, and the final film of Fred Flintstone himself, Alan Reed. (currently streaming on Tubi) 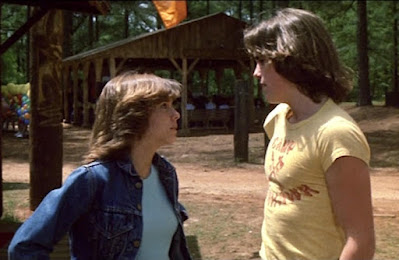 I'm a sucker for summer camp movies, and being a summer camp kid myself I can confirm that most of the time spent away from home as a teenager at camp was occupied with trying to get a camp girlfriend. Little Darlings is a perfect mix of summer camp movie and an Odd Couple-esque story. Starring Tatum O'Neal and Kristy McNichol as two 15-year-old girls from opposite sides of the tracks, we also get the beautiful Armand Assante, Matt Dillon, and a very young Cynthia Nixon! The plot concerns the two girls, each part of a different camp “faction,” and their competition to see who will lose their virginity first. The summer camp movie is de facto a coming of age movie as well, which is also one of my favorite genres. Maybe you didn't attend summer camp as a kid but we've all grown up, so in some way or another we can relate to these stories, and Little Darlings is one of the best.

Finding a decent sex comedy — especially in the '80s — that is funny and not too uncomfortable to sit through is sometimes like searching for a needle in a haystack. Sex comedies are a dime a dozen, and most are unwatchable. There are only a small handful I would consider to be great or good, and about the same amount I would consider to be ok. Goin’ All the Way! is just fine. The plot on IMDb makes it sound way more offensive as it actually is. A guy wants to have sex with his girlfriend but she isn’t ready so he goes off and tries to get his rocks off elsewhere. And what is an '80s sex comedy with a mud wrestling scene? (currently streaming on Tubi)

If I remember correctly, and according to the movies, the '80s were full of rock 'n roll and bouncing boobs. In Splitz, we get the best of both worlds. Because of its epic soundtrack with artist like Blondie, Bonnie Tyler, and The Olympics, I don’t see this one making the jump to Blu-ray anytime soon. The Splitz are an all girl rock band comprised of Robin Johnson (Times Square), Barbara Bingham (Friday the 13th Part VIII), and Patti Lee (Dan Pullen’s high school teacher). They see a sorority comprised of “nerdy” girls who are going head-to-head against a rival sorority full of buxom ladies in a multi-event competition. The Splitz, while not athletically inclined, know how to play dirty so they team up with the nerds to dominate their opponents. Included are several shots of bra-less women in tight shirts running in slow motion and Shirley Stoler! (currently streaming on Tubi)
Posted by Patrick Bromley at 5:00 AM

Email ThisBlogThis!Share to TwitterShare to FacebookShare to Pinterest
Labels: goin all the way, little darlings, sex comedies, splitz, the seniors, where the boys are