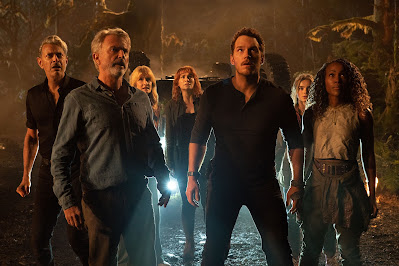 There’s an argument to be made that 2015’s Jurassic World had the best pitch — and almost certainly the best tagline — of any recent legacy sequel: “The park is open.” It almost sells itself, doesn’t it? A generation after Jurassic Park, a new flock of scientists, engineers, and opportunistic hucksters have taken John Hammond’s ill-advised dream to its natural conclusion. Brimming with hubris and unburdened by the ethical concerns of yesteryear, they’ve hurtled over safeguards and introduced attractions so astounding that — at long last — they’ve captured the imagination of the entire world. The quantum leap in genetic manipulation has even given our friend Dr. Wu (BD Wong) carte blanche to mix up new dinosaur breeds like cocktails, while animal behaviorists like Owen Grady (Chris Pratt) have forged bonds with the pack’s most intelligent specimens. That the film itself turned out to be a noisy, hollow retread of Steven Spielberg’s 1993 original was oddly fitting: People — be they genetic engineers or development executives — never learn. 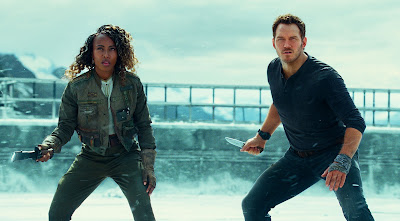 It’s hard to argue with $1.7 billion in box office, though, so one sequel later (J.A. Bayona’s bizarre, almost baroque Fallen Kingdom), it’s time to bring an end to what Universal insists we refer to as “the Jurassic Era (era).” Four years after the destruction of Isla Nublar, dinosaurs have spread across the globe, creating traffic jams, disrupting ecosystems, and settling in densely populated urban areas. Reformed corporate stooge Claire Dearing (Bryce Dallas Howard) continues to fight for their conservation, but world governments have abdicated responsibility and — imagine this — given private corporations free reign over the animals’ collective future. The largest of these is BioSyn, led by Campbell Scott’s Lewis Dodgson. Last seen attempting industrial espionage in Jurassic Park, Dodgson now presents as a Cupertino tech mogul whose interest in dinosaur research is, he claims, purely altruistic. But when his goons kidnap Claire and Owen’s surrogate daughter/InGen clone Maisie Lockwood (Isabella Sermon), the more insidious truth becomes clear.

Meanwhile, paleobotanist Ellie Sattler (Laura Dern) discovers that a new breed of locust is devouring any and all crops not grown with exclusive BioSyn seed. Sensing a conspiracy, she enlists the help of Alan Grant (Sam Neill) — whom she describes as the world’s most trustworthy scientist — to help her find proof. The pair fly to BioSyn’s sprawling dinosaur preserve, where raconteur mathematician Ian Malcolm (Jeff Goldblum) is giving lectures in support of his newest book. While our favorite trio scours the campus for clues, Claire and Owen dive into the seedy dino black market, reuniting with old pal Barry (Omar Sy) in pursuit of the trafficker responsible for Maisie’s abduction (Dichen Lachman as Sonoya). One Bond-esque motorcycle chase later — featuring yet another pack of “bred-to-kill” raptor soldiers — Owen and Claire hitch a ride to BioSyn with smuggler Kayla Watts (DeWanda Wise). All roads converge on Maisie, who discovers that her mother, an original Jurassic Park scientist, may have coded her with the keys to a massive genetic discovery. 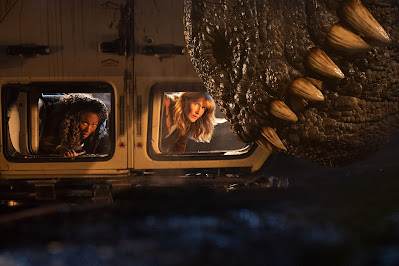 If your eyes glazed over midway through those last paragraphs, don’t worry: Dominion presents plenty of perfunctory dinosaur action to dilute all the corporate intrigue and wide-eyed revelation. Our old velociraptor friend Blue is back — with a cute baby! — as are the T-rex, the aptly-named Giganotosaurus, and even a herd of venom-spitting Dilophosauruses. Few of them do much for the film’s dramatics, of course — we’re miles from Spielberg’s masterful, terrifying set pieces — but it’s nice to know they’re still stomping around in the background somewhere, ready to be called upon whenever the dialogue loses steam. Director Colin Trevorrow (who co-writes the screenplay with Emily Carmichael) has a ton of fun integrating the ancient beasts into the modern world: Triceratopses tread through grasslands alongside buffalo, Pterodactyls make nests in New York skyscrapers, and Rexes face off with bellowing lions. Save for a few rubber puppets, however, they all have that weightless, CGI gloss that animators just can’t seem to solve.

Dominion knows that we’re here for the legacy cast, though, all three of whom acquit themselves with the subtlety and gravitas of summer camp counselors getting hammered after lights out. Laura Dern and Sam Neill are given some of the worst expository dialogue in the franchise’s long, exposition-filled history, which would feel like a betrayal had their presence in Dominion been anything more than an exercise in empty nostalgia. Grant and Sattler don’t need to be here, but isn’t it fun to watch them make googly eyes at each other — Sattler’s marriage has recently ended — and remind us of all the movies we’d rather be watching? Jeff Goldblum gets his Jeff Goldblum on, sliding lithely through each moment like a salamander in heat. He makes a few nonsensical speeches, shoots a few metatextual barbs (“Jurassic World? Not a fan.”) and even gets caught unbuttoning his shirt to reveal a bit more pec. It’s all patently ridiculous, and one line about Malcolm sliding into Sattler’s DMs made me want to set the theater ablaze. But who the fuck cares? It’s Jurassic Park 6. 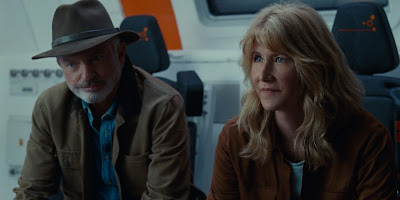 Still, Trevorrow and Carmichael deserve some measure of credit for crafting a sequel that at least tries to look to the future while it’s retreading the past. Dominion is a globe-trotting adventure with a diverse and charismatic cast (especially Sermon and Wise, who bring what qualifies as the film’s heart and wit), a departure from the usual secluded island drama. Clumsy though it may be, it takes care to resolve the series’ various plot threads — the implications of human cloning, ecological disaster, and conglomorate hegemony are all at least casually yada-yada’d — and closes on a note of hope that doesn’t feel overly saccharine. Had Top Gun: Maverick not just reinvigorated the public’s desire for tactile, character-based action, it may have slipped through a crowded tentpole season unscathed. The reality, though, is much less forgiving. Dominion is a stupid, guileless movie with palpable contempt for a generation of moviegoers whose senses have been so dulled by franchises that they wouldn’t know a compelling story if it came up and bit them on the ass.
Posted by Patrick Bromley at 12:00 PM