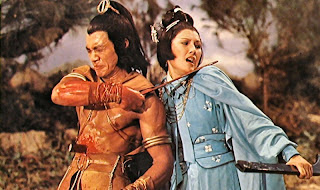 Happy Junesploitation, everyone! I realize Mark Ahn is our resident kung fu expert, and as someone who is not too familiar with the genre and the many sub-genres it breaks into, I took the week leading up to this most wonderful time of year and watched about a dozen martial arts movies. Here are five kung fu movies that are highly underseen (according to Letterboxd). As mentioned in Patrick's primer, Amazon Prime Video and especially TubiTV are literal goldmines of exploitation cinema where you can find movies you never would've come across, including these five. 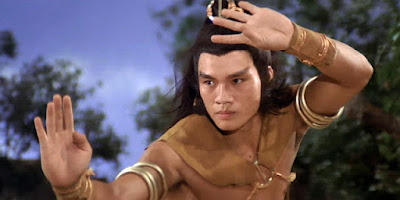 This list could easily be entirely comprised of Shaw Bros. movies, but I wanted to share the love. While The 36th Chamber of Shaolin and Dirty Ho (my favorite kung fu movie) are masterpieces, Kid with the Golden Arm falls under the radar when it comes to the Shaws. Like most of their movies, this one has several laugh-out-loud moments and you'll witness some of the greatest fight choreography you've ever seen. Yang Hu Yun has been hired to deliver a shipment of gold to an impoverished area of the country. Gangster Chi Sha has threatened to steal the gold, prompting Yang to hire out protection. Each of Chi Sha's men is a master of a different style of fighting, including the eponymous Golden Arm, who at one point takes an opponent's sword, wraps it around his arm, the proceeds kill his opponent by corkscrewing the sword through him.

This list would be incomplete without a Jim Kelly picture. Not only do we have Black Belt Jones himself, we also have James Bond alums Harold “Odd Job” Sakata as the big bad, and the man to play 007 only once in a movie, George Lazenby as the top cop! And as an added bonus, Aldo Ray shows up in a minor role as well. “The Pig” has plans of world domination by killing people with a freeze ray (that's right) and selling the blueprints to the highest bidding foreign government. The only problem is the scientist that developed the weapon is dead and the only plans exist in a microchip embedded in his daughter's forehead. Lieutenant Detective I.J. Ash (Kelly) is on the case by kicking as much ass as possible to protect the girl with a computer in her head. 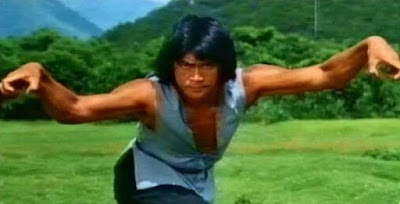 By far the funniest in the bunch, Crystal Fist (aka Jade Claw) combines more of that incredible fight choreography we've grown to love with cartoonish moments of comedy in a Sammo Hung/Jackie Chan-style kung fu movie. An evil gang is sweeping the country, taking over any fighting school they come across, and killing anyone that stands in their way. Billy Chong stars as a young man whose father was one of those killed by the “Villainous Leader” (thanks, IMdB), and begins training with the main who trained his father. Only by learning the lethal combination of eagle claw and shadow fist to make “Shadow Claw” will he be able to defeat his enemy.

The key art for Fearless Fighters looks like an advertisement for a child's action figure of the '70s or '80s. “The ultimate in all martial arts! See 10 Incredible Devil Weapons Used By Kung Fu Masters! All New Fiery Action!” With those weapons it feels very much like a classic swashbuckler combined with the magic of Crouching Tiger, Hidden Dragon. The film opens with a caravan led by Lightning Whipper being attacked and robbed of all their gold by To Pa's Eagle Claw Gang. Lightning Whipper's children, along with the man who was wrongfully accused of stealing the gold, and a former Eagle Claw member vow revenge and go up against To Pa and his “10 Incredible Devil Weapons!”

Out of these five movies, Super Chan's ratio of fighting to not fighting is unmatched. The first half of the movie is David Wei Tang as Chan defeating entire armies by himself. Like Fearless Fighters, this is mostly weapons-based combat as opposed to hand-to-hand, but the fight choreography is still something to behold, including the final battle where it's sword versus garage door spring. The plot is simple: a man vows revenge for the death of his teacher. And, as the title suggests, Chan is literally invincible.
Posted by Patrick Bromley at 5:00 AM