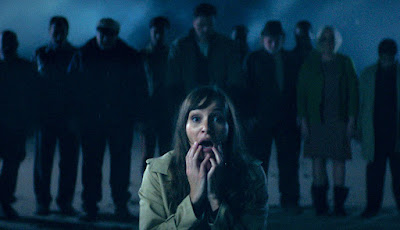 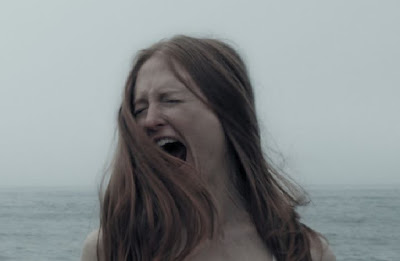 Obviously a movie made at the height of the pandemic, Alone with You is essentially a one-hander. Starring its co-writer and co-director, Emily Bennett, we're stuck in a small Brooklyn apartment with this woman for about 80 of the 83 minutes of this movie. Appearances by Barbara Crampton and Dora Madison via video chat break up the monotony of our time spent caged in this bottle story. Charlie is a young woman waiting for the arrival of her partner Simone, who's been away for work. As boredom and loneliness set in, Charlie video chats her overbearing, religious zealot of a mother who condemns her daughter's lifestyle. Meanwhile, something has fallen from the fire escape and blacked out Charlie's windows, AND the door has jammed so she is entirely cut off from the outside world. Her only connection is her friend Thea, who is progressively getting drunker throughout her periodic calls. Charlie suspects Simone is cheating on her, so paranoia starts to set in, and she starts hearing voices from the vents. This all creates an unhinged movie anchored by a dedicated and terrific performance by Bennett which ultimately reminded me of the excellent paranoia horror from 2015, They Look Like People from director Perry Blackshear.

Alone With You is streaming on Shudder. 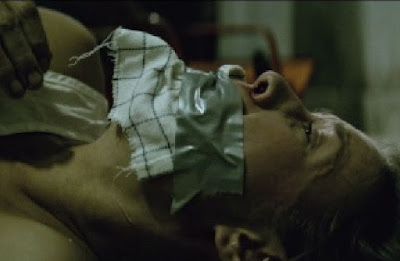 Released in its native Denmark followed by a wider release across portions of Europe in 2020, Breeder didn't come to the states till January of 2022 so I'm counting it as a 2022 release. A New French Extremity film via Denmark that came out 20 years after the initial wave, this is by far the most brutal film I've seen all year, and I watched Martyrs (2008) for the first time in March!. All this to say, if you're not into the “torture porn” of NFE cycles, Breeder is definitely not for you. It is for me, though. As a matter of fact, it's number three on my list of favorite horrors of 2022 behind Mad God and X. Mia is married to Thomas, a partner of a biotech firm who is developing cutting edge anti-aging supplements. Dr. Isabel Ruben is the head of this firm, a hard-nosed, conniving woman who Mia doesn't trust. After Mia and Thomas's neighbor escapes and attempted kidnapping, Thomas says he will drive her to the hospital. When he doesn't return hours later, Mia drives to his office to look for him. There she discovers what's really been going on: you can make assumptions based on the title. Like I said, it's brutal, sometimes hard to watch, really gross at times, and extremely exciting.

You can stream Breeder on Amazon Prime and Tubi. 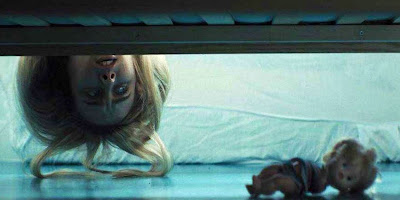 The Kindred opens cold with a young woman running away from a high rise apartment, stopping, turning, and watching a body fall from the sky, spraying her with blood. Blackout, title, “several months later.” I love a movie that gets you from the very start. The problem, though, is where do we go from here? From that high of intensity usually the only way is down. (no pun intended), and many times we never come back up. Luckily, The Kindred is a fabulous mystery that, while not wholly original, kept me intrigued the entire 94 minutes. After the blackout Helen (April Pearson) is in the hospital, just awoken from an extended coma. She's only one of a few women in the entire world who has successfully given birth while in a coma. Suffering from amnesia, Helen really only remembers her father's suicide. As Helen learns how to live again (walk, drive, etc.) and be a mother and wife, she's (literally) haunted by her father's death and cause of his depression and begins investigating. Two things: this movie has one of the scariest images I've seen all year, and the very end made me choke on my water.

The Kindred is streaming on Tubi. 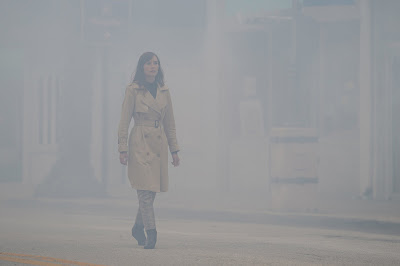 I think it's our duty as horror fans – nay, MOVIE fans – than whenever a new Joceline Donahue drops we too drop everything and rush to see it. Ditto with Mickey Keating. Ditto with Joe Swanberg (although I'll forgive you if you don't skip Grandma's funeral to watch a new Swanberg). In Keating's latest offering, Donahue and Swanberg are a couple who go back to her deceased mother's hometown because they received notice her mother's grave was vandalized. The couple travels to the island on which Mom is buried – an island with only one access point that closes every night. What we get is a sort-of updated version of Dead & Buried. We're left questioning, along with Donahue, what's real and what's rumor. Included are great guest spots by Richard Brake, Jeremy Gardener, and Larry Fessenden.

You can stream Offseason on Shudder. 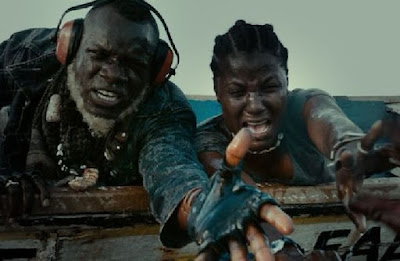 Another recent pick-up for Shudder is a Senegalese crime-horror-thriller Saloum. This is only the third film I've seen from Senegal and the second horror film from the African nation I've seen. Mati Diop's Atlantics from 2019 is another breathtaking piece of cinema that everyone should see, an indicator there are really special things happening in that country on the film front. Saloum is a high-intensity, fast-paced crime film first and foremost. The story follows three mercenaries who've been tasked with the extraction of a drug lord out of Guinea-Bissau. Their plane makes an emergency landing in Saloum, Senegal, where they decide to hide out at a quiet preserve owned by a man who is keeping a secret. It's a deeply moving and angry movie that is well worth 84 minutes.

Saloum is currently streaming on Shudder. 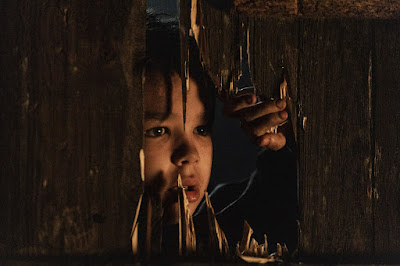 Another two-hander bottle movie, The Wasteland is a Netflix original movie out of Spain. As a foreign period piece, I like to view these movies as history lessons. (Another Spanish period piece I highly recommend is Samu Fuentes's The Skin of the Wolf, also a Netflix original.) Think of The Wasteland as a take on Robert Eggers's The Witch. Salvador, his wife Lucia, and their son Diego live on a very flat, very deserted, piece of land and live according to Salvador's rules for survival. Beyond the perimeter of their house and garden, three crosses dressed in ratty cloth stand ominously. We learn that “something” is out there, and the crosses are the family's protection. After a stranger is found dead in the nearby stream, Salvador takes it upon himself to bring the body to the nearest town in search for any surviving relative. Lucia and Diego are then tasked with taking care of the homestead – bringing in the harvest, feeding the animals, preparing for the oncoming winter, and keeping away whatever evil thing lurks in the wilderness. Things quickly turn from bad to worse and madness sets in. It's a slow, moody, very dark, oftentimes depressing piece.

Find The Wasteland on Netflix. 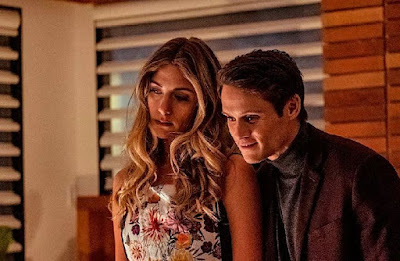 Lastly, a movie that has garnered a unanimous “Oh my god I'm so uncomfortable right now” from those that have seen it. Who Invited Them is everybody's worst nightmare: what happens when you throw a party and the guests from hell won't leave? Adam is hellbent on climbing the social ladder so he convinces his less-than-enthusiastic wife Margo to throw a housewarming party. As the party winds down, Adam and Margo say their goodbyes to the final guests. But then they realize there's one couple left. Tom and Sasha are the neighbors, and Margo isn't happy they're lingering. Adam wants a nightcap, and Tom and Sasha weasel their way in, so the party rages on. As the evening creeps into the wee hours cracks in Adam and Margo's relationship begin to show, so Tom and Sasha weasel deeper. While a tad predictable, it's still very fun. Just prepare to shift in your seat and groan a lot.

Who Invited Them is streaming on Shudder.

Also check out Glorious, See for Me, and Warhunt.

Email ThisBlogThis!Share to TwitterShare to FacebookShare to Pinterest
Labels: 2022 horror movies, alone with you, breeder, offseason, saloum, shudder, the kindred, the wasteland, who invited them