Surf’s Up! Time to Save the World!

The early 1990s were a magical time when ninjas captured the hearts of both Hollywood and kids. I recently re-watched E.T: The Extra Terrestrial in theaters and the thing that hits me the hardest emotionally about it now is how magical and memorable it would be if a benevolent alien landed on Earth. It’s an experience that will stay with that family for the rest of their lives. They’ll become believers in the extraordinary and not jaded suburbanites. Therein lies part of the appeal of Surf Ninjas.

In one way, the early ‘90s (with films like Teenage Mutant Ninja Turtles) gave kids the allowance to use their imagination and be silly – “Yes, let’s take this scenario of overgrown talking surfer dude turtles who know martial arts and eat pizza at face value.” In another way, it was maybe a bad thing by pushing a chosen one narrative – one of you are cool and important and the rest of you fall in line behind your king/queen. Look, I love movies like The Princess Diaries and Surf Ninjas, but they also posit that kids could be living their lives and unbeknownst to them are rulers to-be of countries and their governments. It’s the E.T. dream of the unbelievable as power grab. 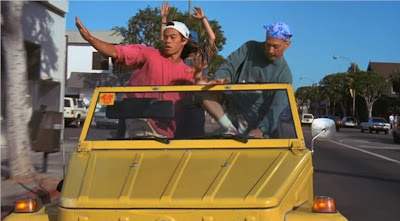 In the grand scheme of things, it doesn’t matter too much, though, when the movie pushing this narrative is as zany and fun as Surf Ninjas. New Line Cinema built the movie as a star vehicle for Ernie Reyes Jr., who imho was done dirty and should have gone on to be a bigger star. The dude is charismatic, funny, and adept at martial arts. What more could you want? He earned his keep in Teenage Mutant Ninja Turtles II: The Secret of the Ooze and Surf Ninjas was the time for him to take over Hollywood. It didn’t happen and for that I can only blame everyone other than me because I was there for Ernie Reyes Jr. since day one. He’s truly the people’s hero if you would just let him be that.

Getting back to zany and fun, can we just talk about the myriad of delights Surf Ninjas contains?
• Moto Surfing
• The “Barbara Ann” musical numbers with the Baba Ram of Mee Grob
• The answering machine bit with Leslie Nielsen as Colonel Chi
• The younger brother, Adam (played by Nicolas Cowan) being a clairvoyant but only through the Surf Ninjas video game he’s playing on his Sega Game Gear. Some might say this is shameless product promotion, but I say it made me want a Sega Game Gear and for a boy who wanted very little it made me want to be a consumer, which our economies value
• Everything Tone Loc. I love that he swallows the key to his handcuffs every Tuesday and I love that he stops trying to arrest our Surf Ninjas and decides to join them because a) he hasn’t had a vacation in 17 months and b) he needs some serious laughs.
• The sequence of the henchman who repeatedly falls down a giant set of stairs 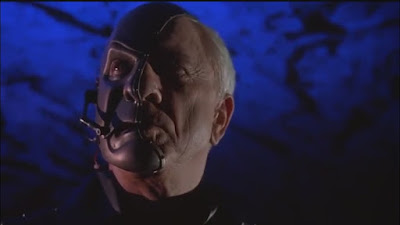 Surf Ninjas was a late summer box office bomb when it was released (on the same day as Hard Target!) in 1993. I was all about Surf Ninjas that year – I told all my classmates about the classic playing in theaters, I was crestfallen seeing it went from the first-run theaters to the dollar theaters in about 3 weeks (I was a weird kid) and I used my allowance to rent it on cable pay-per-view so I could record Surf Ninjas and watch it constantly over winter break that year. It boggled my mind that most people had no relationship to this film while mine was so profound and fulfilling. I want a legacy sequel.

I’m sure its nostalgia talking, but even on a re-watch this past weekend, I was happy to see how fun Surf Ninjas still is. It’s also a bit depressing to remember a time when kids movies had actual people in them. Is it just me or does it seem odd that so few children’s movies released today are live action? What happened to movies where real kids and teens just want to go out and have an adventure? Denying them these outlets are how we get Shrek raves and the Gentle Minions. These people are going to be your coworkers one day soon. That’s terrifying. I’d rather manage a team of surfers who know martial arts.
Posted by Patrick Bromley at 5:00 AM