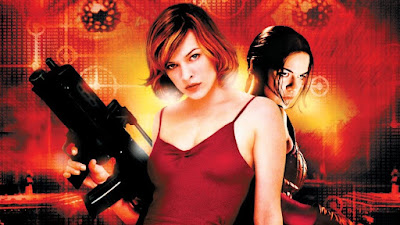 Nominated for “Most Underrated Movie of the Year” at the Golden Schmoes Awards. It lost to Frailty.

• Best Scene/Moment (tie): Commando team gets cut up by a laser defense system and a severely bitten Michelle Rodriguez taunting a horde of hungry zombies with drops of her own blood.

• Best Song: “My Plague (New Abuse Mix)” by Slipknot which plays over the end credits.

• Best Merch: A “Resident Evil Umbrella Corporation T-Virus Prop & Antidote with Display Case” for only $29.00. This is pretty rad (Note: I’m bringing “rad” back) for that price. 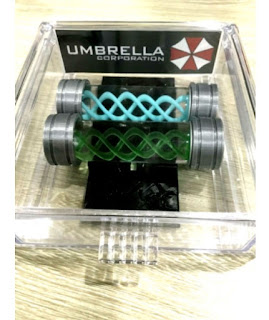 • Director Check: Resident Evil was directed by Paul W.S. Anderson, a director whose filmography I want to like more than I do. His first film was the Jude Law-Sadie Frost crime drama Shopping in 1994. Anderson became a brand for sci-fi/horror/action flicks beginning in 1995 with Mortal Kombat (probably my favorite of his films) followed by 1997’s Event Horizon (which I also love). Anderson stayed in the sci-fi genre for his next movie, Soldier, starring Kurt Russell, before taking a nearly 4 year break until the first Resident Evil in 2002. After that, Anderson temporarily left the franchise to make 2004’s underwhelming Alien vs. Predator and 2008’s underrated Death Race remake starring Jason Statham. He returned to the Resident Evil franchise for films 4-6, 2010’s Afterlife, 2012’s Retribution, and 2016’s The Final Chapter. I haven’t seen any of them. Anderson also directed a mostly forgotten 2011 adaptation of The Three Musketeers and 2014’s historical disaster film Pompeii. His most recent movie was another collaboration with his wife, actress Milla Jovovich, in 2020’s surprisingly awesome Monster Hunter, which was released in theaters during the pandemic. Anderson’s next project, according to IMDB, is a 2023 fantasy action movie titled In the Lost Lands starring Jovovich and Dave Bautista. After writing this, I’m realizing I might be a bigger fan of Anderson than I initially thought I was.

• Year 2002 Movies to Trailer Before It: Feardotcom, Ghost Ship, Queen of the Damned 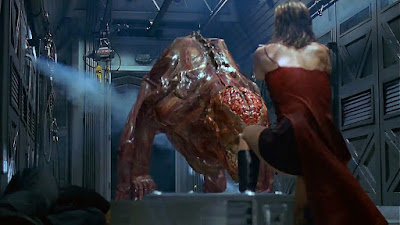 • Only in 2002 (tie): Eric Mabius cast as the male lead and the CGI blob monster called The Licker, which looks like if you made Venom out of chewed up Bubblelicious.

• I Miss: The version that never was, written and directed by George A. Romero. He wrote several drafts of a screenplay for a Resident Evil adaptation in the late 1990s but they were rejected by the studio. 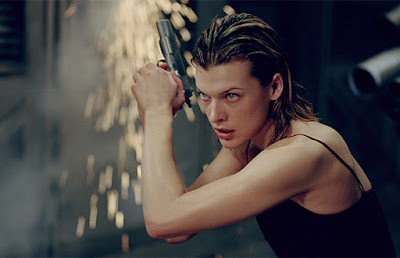 • What I Thought in 2002: I was looking forward to a film adaptation of Resident Evil when I saw it in theaters but went away disappointed. As a fan of Resident Evil 2 on PlayStation, I felt like they botched it at the time.

• What I Think in 2022: I might be warming up to this franchise a tad. I don’t think the 2002 Resident Evil is great by any stretch, but I enjoyed myself more this time especially as it went along. Maybe I was primed for it by my love for last year’s Resident Evil: Welcome to Raccoon City.
Posted by Patrick Bromley at 5:00 AM