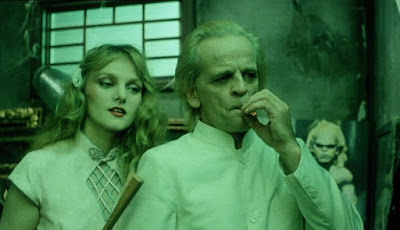 A short weekend away from regular life does a body good. My wife and I took the kids to Worlds of Fun in Kansas City when the park gets a makeover for the Halloween season. Bobbie and Eben did the rollercoasters and dizzy rides and Rowen and I rode the train and did the kiddie rides at Camp Snoopy. It was nice to leave our regular lives behind albeit for a brief time. That also meant a short weekend away from movies for this writer. 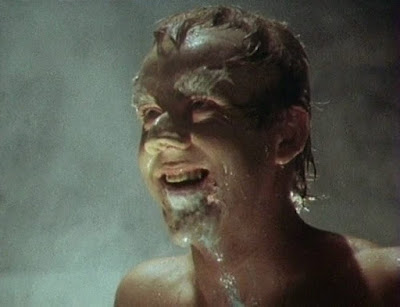 Prior to our departure, I snuck in 56 minutes of the Icelandic made-for-TV folk horror Tilbury (1987). As I've stated in the past, foreign films act as a sort-of history lesson in part. Add to that a folk horror aspect and we get a beautiful mix of literature and history. Tilbury takes place in 1940 when the British military had set up shop in Iceland. A young man goes to work for the army by filling sandbags and building foxhole structures in Reykjavik. There he comes across a young woman over whom he fawned in childhood. One of the British officers is a peculiar-looking man who seems to have the run of the encampment and those housed there, including the previously mentioned young woman. It's revealed that this officer is a Tilbury, a humanistic creature of Icelandic lore. It's an interesting look into this time period in Iceland, a study on this particular legend, and a fascinating example of a TVM from this region of the world. It's part of the All the Haunts Be Ours box set from Severin, or you can stream it on Shudder as of this writing.

Having two separate podcast appearances for which to prepare, I had myself a Sunday morning Klaus Kinski double feature. I’d seen a handful of his performances in the past, but always wondered: is Klaus Kinski a good actor or is he just weird? After watching this double feature, the question remains the same. Jesus Franco's Venus in Furs (1969) was exactly what I thought a Franco movie would be. I'd only seen The Awful Dr. Orlof (1962), which was not what I was expecting from a Franco movie. Solely going off assumptions and what I'd heard, I was expecting boobs, frantic editing, and confusion. You don't get that in Orlof; you DO get that in Venus. A trumpet player roaming the beach finds the dead body of a woman washed up on the shore. He goes on with his aimless life and relationship with his singer girlfriend and soon comes across the woman whose body he'd seen on the beach, alive and well. The musician has a regular gig for a group of rich sadists led by Kinski, and the dead woman has returned for her revenge. It's a mess, and while I won't give up on Franco quite yet, it doesn't bode well for my enjoyment of his other films. Next was my first experience of a Shuji Terayama film. Fruits of Passion (1981) is a loose sequel to “Story of O,” the 1954 erotic novel by Pauline Reage. O, played here by Isabelle Illiers, is a Rapunzel type, trapped in a brothel and forced to perform indecent acts on her lover, Sir Stephen (Kinski), while he's allowed to galavant and develop a relationship with Nathalie (Arielle Dombasle). Meanwhile, a young dishwasher is obsessed with O and wants nothing more than to buy her and rescue her from this life. It's a breathtakingly beautiful film, encouraging me to add every other film Terayama has made to my watchlist. The few moments of graphic sex (read: penetration), several instances of consensual sexual violence, and Kinski himself being a real-life monster, make Fruits of Passion, as they say, not for everyone.

The following day the boys and I sat down for a lunch date with Scooby-Doo. Trick or Treat Scooby-Doo! is the latest Scooby joint and, while not earth shattering, it's a terrific gift for those of us who grew up on reruns of the original show (or the original airing if you're JB). After capturing Coco Diablo, head of the costume crime syndicate, the gang discover doppelgangers of old villains trying to spoil Halloween for the kids of Coolsville. Being the good parent that I am, raising my boys on old cartoons, it was fun listening to a 10- and four-year-old point out all the villains from the 1966 series that appear in this new version. This also marks a momentous occasion, as Velma comes out as gay. 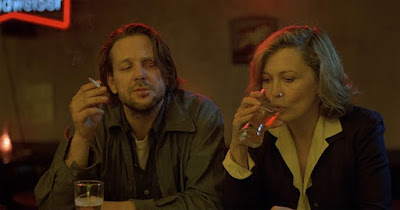 For my second podcast appearance I sat down with Mickey Rourke and Faye Dunnaway in Barbet Schroeder's Barfly (1987). Scripted by Charles Bukowski and based on his life as played out by the character Henry Chinaski, Barfly is a document of three days in the life of drunk wanderer Chinaski (Rourke). Coming at this from an addict’s point of view was an interesting experience. Had I seen this 18 months ago, I probably would've hated it, thinking Chinaski was a worthless human being (Pot, meet Kettle). Now, sober, I have so much love for this character who is obviously in the throes of a horrendous disease. On paper I hate Chinaski. After reading “Ham on Rye” earlier this year I vowed to never read another Bukowski. But Rourke's portrayal of the character is something altogether different than what I'd read. Naturally, Rourke's charm and good looks do a lot for him, but Bukowski's script is so much lighter and easier to swallow than his prose. Barfly might be the ultimate hangout movie. Nothing happens. No consequences are to be paid by the end. Schroeder's camera doesn't condemn nor praise Chinaski or Wanda (Dunnaway). This film simply observes two people battling alcohol addiction in a very specific neighborhood of Los Angeles. An early example of this story is Lionel Rogosin's docu-drama On the Bowery (1956). 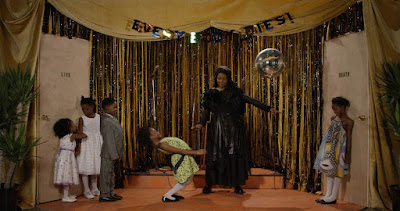 I watched three shorts this week, all of which can be found in the Criterion Channel's Horror Shorts collection. First up was the French-Canadian slow burn The Black Case (2014). Taking place in 1930, two children in an orphanage are quarantined during a tuberculosis scare. In striking black and white and hauntingly silent, the 13-minute film ends with a punch. It would be a good aperitif for films like The Blackcoat's Daughter (2015), or The Eyes of My Mother (2016). I followed that with another blow to the gut with Nuotama Bodomo's Everybody Dies! (2016). A cable access children's show a la Shari Lewis and Lamb Chop's Play-Along has Ripa the Reaper talking to black children about death. The satire landed like a two-ton anvil right on my head and nearly brought me to tears as I watched Tonya Pinkins' pleadings. And finally there was White Echo, Chloe Sevigny's séance-gone-wrong 15-minute short. Another satire coming from a woman's point of view, this was the “scariest” out of the three shorts I watched.

Next week the director series continues with four Wes Craven films I haven't seen. Stay scary, friends!
Posted by Patrick Bromley at 5:00 AM