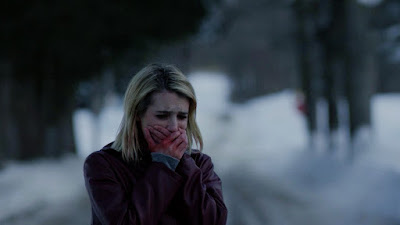 At the center of much demonic lore sits the prize sheep of purity; she is young and blonde, usually early in puberty but on the brink of her first sexual encounter, and traditionally attractive. In fact, she is perfect; irresistible, even. This obsession with the canonization and demonization of young women is as old as lore itself. We watch this archetypical young woman get torn up, consumed, and violated—all the while admiring her gentle grace and young naivete. She is what we are all taught to fear—purity losing itself to darkness.

Countless films play with this theme and countless more bring nothing new to the idea. A lot of horror movies try to reinvent classics; play with things that go bump in the night...so much so that they almost end up parodying the often simple aspects of horror movies that have the power to make skin crawl. The last couple of years, however, we’ve been blessed with films—Darling, The Babadook, and The Invitation all come to mind—that function as a love story to horror, while not trying too hard to reinvent originals. What these movies have in common, above anything else, is that they all manage to keep us in a state of hypersensitivity. The audience is so used to seeing the big reveal that when we don’t get it, we’re kept in that state of wanting, of expecting the worst, and of hoping to get scared. Ultimately, we don’t get the release of a singular, scary moment and are left chewing that feeling long after the film is over. 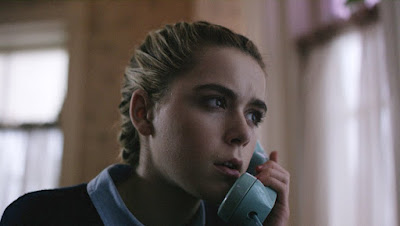 The Blackcoat’s Daughter was met with pretty ambivalent reviews, something I was pretty surprised to see after watching. Half say the film is painfully slow and doesn’t reward the viewer any entertainment. The other half raves about the film’s genius. They argue, chaos ensues, and I get sucked into reading one cinematic comment flame war after another. But, for whatever reason, I’m becoming more and more drawn to movies that have an even split of positive and negative reviews—both parties, of course, have a passion I couldn’t replicate if I tried. The Lobster, Swiss Army Man, and many others fit into this single-sock drawer of difficult to organize feelings.

But, I’m not writing to prove anyone wrong. I’m writing because I loved this movie.

Eerie music—the real star of the movie—sets the scene. “Went to bed on an unclean head/the angels they forgot her” rings chillingly in freshman Kat’s bedroom as the camera creeps up from below her bed. Whether it’s a dream or reality, in this opening scene Kat is woken by a large, black coated figure, the head of whom is cropped out of frame. He then leads her to a wrecked vehicle, there’s blood on the windshield, “Daddy,” she asks “what happened?”

The glacial wintery setting further mutes the movie’s accessibility of information. It’s that special kind of silence after a snowstorm, the one where you feel you can hear for miles and yet you’re all alone in the same moment. It’s a very specific kind of eeriness that serves to amplify the character’s off-color actions. Against the quiet, Kat sticks out like a sore thumb. But what’s especially surprising here is we can’t tell why. There are no clues to who Kat, Rose, or Joan were before the movie picks up their narratives. Has Kat always been an outcast? Is there anything even wrong with her? It’s obvious that something isn’t right, but beyond a chilling mood, there’s not much we can sink a stake into. This bears the question, is it necessary to have a character’s backstory to empathize with them?

Now, I really don’t want to say that any of the three girls are props, because that carries with it a very specific connotation, but they definitely move about almost pawn-like. Joined by the coated figure, two nuns, and a less than fortunate pair of do-gooders, Kat, Rose, and Joan are vehicles through which we can ride the murkiness and begin to process. 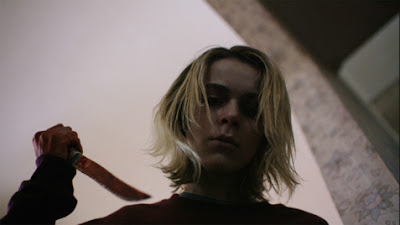 One of the harshest criticisms of the film is that, while it’s full of visual flourish, the plot is too light to make them of any value. I think this the only point I’d like to take a stab at proving wrong. Boredom, lack of scariness, etc., are subjective and totally based on what you are typically drawn to in film. This critique, coming from one of the Roger Ebert writers, reads as empty. What The Blackcoat’s Daughter is doing is not superfluous beauty; instead it is beauty that taps into the cinematic vocabulary of older horror. How can one displace the viewer while using very limited special effects means? Architecture, light, framing, and (as mentioned before) music. Yes, it’s more work to consider these elements more than just atmosphere, but in the case of this movie, the pay-off is a really fun breed of entertainment.

The movie’s reliance on architecture as a disorienting device is exceptionally compelling. Doors flutter open and shut, the camera winds through, and the girls carry us through the labyrinthine school. With each passageway, the music builds and there are moments where the cinematography is almost 1st-person-shooter-like. I am an extremely feeling person; emotions are really my main tool in navigating literally any piece of art, so even though we only know one or two things about each of the characters, this visual perspective is one that put me very much in the shoes of whatever girl was on screen. To me, this isn’t lazy filmmaking or superfluous prettiness. It’s very sharp visual storytelling. Mood and emotion can tell us so much, and I think it’s impressive that The Blackcoat’s Daughter trusts the viewers as much as it does. It conjures similar vibes to Under the Skin or even 2001. 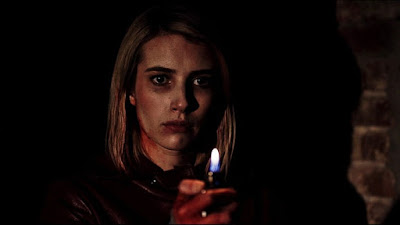 It is possible that this is yet another example of horror purism and its disdain for the genre’s inevitable evolution. And that’s fine, I suppose. Genres all have their unspoken rules and rhythms by which they tell stories; a romantic comedy always has a fight followed by a tender moment of reckoning, a science fiction movie usually ends in a question mark, and—allegedly—horror showcases ghoulies and creepies popping up and wreaking havoc. As much as I love and respect those guidelines, I’m excited for a generational shift toward psychological angst. We see horror every day in the news. We see it, but we can’t feel it. And that’s what this movie does. The Blackcoat’s Daughter makes us feel the horror.