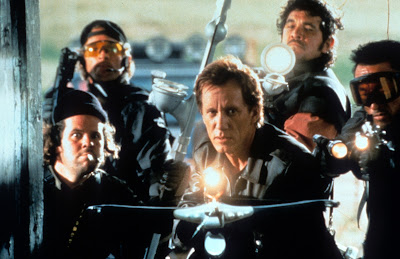 It’s a marathon, not a sprint.

Listen to this week's episode of the podcast to hear my thoughts on several films I watched these past seven days, as I won't rehash them here. Those films include: Texas Chainsaw 3D (2013), Leatherface (2017), Vampires (1998), Village of the Damned (1995), Someone's Watching Me! (1978), Ghosts of Mars (2001), The Texas Chainsaw Massacre (2003), Friday the 13th (2009), and The Amityville Horror (2005).
Several years ago I had a horror podcast. My movie diet consisted almost entirely of horror films, and one October I watched nearly 100 horror movies. By the time the sun rose on November 1 I quit the podcast and didn't watch another scary movie till March the following year. I learned my lesson: I needed to mix in some non-horror in my Scary Movie Month. But, as of this writing (October 12) I have still watched 31 horror movies, and if I'm to make it to our high holy day, I need to slow down. And let's be honest: at some point shit starts to run together. Yet, gems still sparkle. 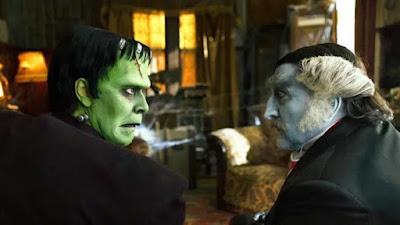 The sparkliest of them all is Rob Zombie's The Munsters (2022). After the trailer was released a few months ago, the hate and snark flooded the internet. Regrettably, I was part of the sarcasm train. It only serves me right that I sat down and ate an entire Thanksgiving feast of crow the day The Munsters was released on Netflix. I immediately fell in love with it. I also felt like I needed to call Mr. Zombie and do a Step 9 with him. “Don't judge a book by its cover.” Yet there I was. So just to make sure I wasn't high or crazy, I sat Bobbie, Eben, and Rowen down for our first official family movie night of SMM and watched The Munsters. Guess what? I still loved it. If we're calling it a horror movie (it's really not), it's my favorite horror movie of the year. Jeff Daniel Phillips had me in tears laughing both times I watched it. I apologize I can't recall who said it first, but “if you meet the movie on Rob's level,you'll enjoy it.” It's a total love letter to this thing for which Rob Zombie has so much affection, and it's an absolute blast. 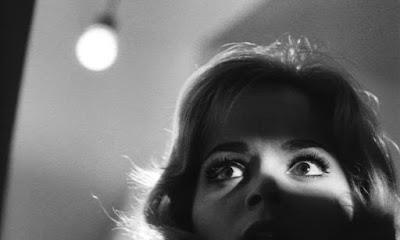 I have an interesting relationship with Italian horror – especially giallo. I realize my opinion is wrong on this matter, but most giallo films bore me to tears. Even the beauty of a Bava or a Martino can't save me from nodding off 20 minutes in. And believe me, I've tried to love these movies; I just can't stay awake through most of them. That said, I don't stop trying to love them, which is why I come back to Mario Bava often. I recently revisited The Girl Who Knew Too Much (1963), Bava's proto-giallo film released a year before what is widely considered the first giallo movie, Blood and Black Lace (1964), also directed by Il Maestro. What was encouraging is that upon this rewatch The Evil Eye (AIP's new title for the film when they released it in the states) bumped up an entire star for me. This tells me I need to keep coming back to these movies because I'll eventually come around on them. Starring Letecia Roman and a young John Saxon, the film is an exciting murder mystery that makes excellent use of paranoia. Roman is Nora Davis, a young American tourist in Rome who witnesses a murder that has apparently occurred a decade prior. After fainting and finding herself in the hospital, she awakes to see Dr. Marcello Bassi (Saxon) taking care of her, whom she starts dating soon thereafter. As is the norm in this part of the world at this time apparently, murders keep happening around Nora, so with the help of a journalist, the three of them begin investigating. This is Bava's most beautiful film in my opinion.

As horror burnout started to rear its ugly head, I headed to France for a film I'd been wanting to see for several years. Mathieu Kassovitz's La Haine (1995) is a fascinating film that serves as a tool of education. In the mid-'90s, riots were prevalent in and around Paris due to police brutality, especially against non-white people. La Haine (translated: “The Hate”) follows three young men navigating their Parisian neighborhood the day after one of these riots. Reports circulate that an officer had lost his gun in the riot, elevating the situation even further. Starring Vincent Cassel, Hubert Kounde, and Said Taghmaoui, it's 98 minutes of high-intensity youth in revolt. Leaning into realism with real life footage of riots, La Haine is a documentary in spirit. Knowing whose hands the lost gun has ended up in opens a pit in our stomach, leading us to believe nothing good can come of this situation. Having done zero reading on it, I have to assume the Safdie brothers drew inspiration from La Haine for Good Time (2017). 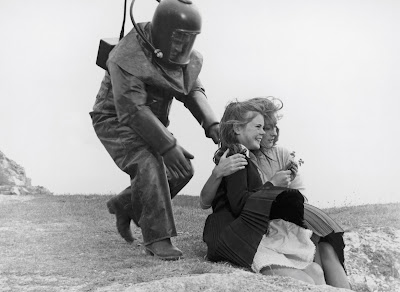 Back to the world of horror I went, and having just finished listening to the latest Pure Cinema Podcast episode with Edgar Wright on underrated British horror, I was pleased to discover one of his picks was a film I had in my collection. Joseph Losey's These Are the Damned (1962) is part of the Hammer Films 20 Film Set from Mill Creek, a box set well worth your time and money. The film stars Macdonald Carey as Simon, a tourist who is beaten by a street gang led by King, played by Oliver Reed. Upon recovering, Simon meets King's sister, Joan, played by Shirley Anne Field and the two strike up a romance. Simon and Joan travel to an island with friends and King on their tail. The group discovers a secret lab full of children that are part of a science experiment. While trying to rescue the children, it's revealed that these kids were born under unusual circumstances, causing them to be radioactive. While intriguing yet extremely misleading, the tagline reads, “Children of ice and darkness... They are the lurking, unseen evil you dare not face alone!” From what I've seen, this is a grand departure for the director of films like The Servant (1963), Boom (1968), and Secret Ceremony (1968). It falls more in line with the slate of films you might see on Saturday nights on Svengoolie. It's still fun, but the most interesting thing about the movie is the earworm of a theme song. 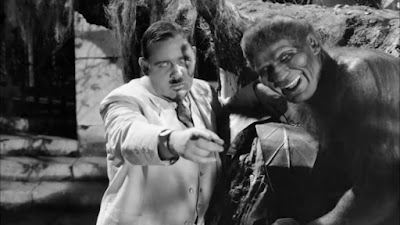 Last week I saw and wrote about The Island of Dr. Moreau (1977), so I took an hour and ten minutes late one night and finally watched Erle C. Kenton's Island of Lost Souls (1932). I suppose this means next week I have to watch the Frankenheimer version. Once again, like Don Taylor's film, the setting in this version was so transportive, but as much as I liked Burt Lancaster as Moreau, Charles Laughton takes the cake as the slimy, conniving, sadist the character really is. (It's no wonder Laughton based his character on his dentist.) The creatures are truly disturbing, and whereas other versions of the H.G. Wells story are feats in makeup effects, Island of Lost Souls truly feels like a film cast with half-evolved natives living on an undiscovered island. Having just watched something good, I felt I needed to watch a giant pile of manure next, so I turned on Disney+ and watched... a Marvel movie. (gasp!) Werewolf by Night once again proves Marvel movies, no matter the subject material or cast, are not for me. It feels like I watched a video game about a story that made zero sense containing characters that didn't fit in said nonsensical story. But you go ahead and enjoy those Marvel movies. 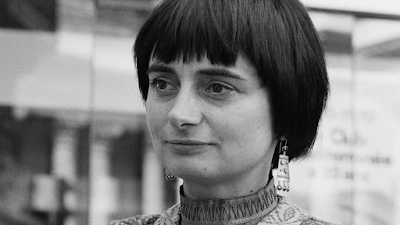 I watched nine shorts as well this past week. All nine come from the French New Wave and can be found on the Criterion Channel, six of which were directed by Agnes Varda. Du cote de la cote (1958) is a 26-minute sarcastic travel brochure depicting the droves of tourists that flood the French Riviera. Varda's narration is biting and hysterical, yet the images are breathtaking and hypnotic. Elsa la rose (1966) is poetry in narration and images about an adorable older couple called Louis Aragon and Elsa Triolet, who didn't get together until their twilight years. Les Fiances du pont Mac Donald ou (1961) is a five-minute, Buster Keaton-esque story about two lovers played by Anna Karina and Jean-Juc Godard who say their goodbyes on a bridge before heading their separate ways. Godard puts on dark sunglasses and confuses Karina with another woman who is knocked out and then taken away by a hearse. You've Got Beautiful Stairs, You Know... (1986) is a documentary compiling footage of people gathering on the stairs of the French Cinematheque featuring Isabelle Adjani. Plaisir d'amour en Iran (1976) is a beautiful romance story of a white French woman and a Persian man reading poetry at the Shah Mosque, surrounded by stunning architecture. Réponse de femmes (1975) is about the most Agnes Varda thing I've ever seen. Gathering a dozen women of different ages, sizes, and races, each one tells what being a woman really means. It's some of the most moving eight minutes of cinema I've ever seen. There were also two Jacques Demy films: La Luxure (1962), his contribution to the anthology film The Seven Deadly Sins; and Le sabotier du Val de Loire (1956), about his father, Yves, who was a clog maker in a tiny village. Demy details his father's day, from his early mornings, to catching up on village gossip, his cold yet loving relationship with his wife, and work in his shop where he handcrafts wooden clogs. It's Demy processing the fact that his parents are nearing the end, contentment, and coming to grips with what one does with one's life. It's a touching love letter to his father and a very moving 24 minutes.

We're headed out of town this weekend so this will be a much needed, movieless two days. Hopefully I come back refreshed and ready for more blood and guts!
Posted by Patrick Bromley at 5:00 AM

Email ThisBlogThis!Share to TwitterShare to FacebookShare to Pinterest
Labels: agnes varda, charles laughton, la haine, mario bava, notes on film, the girl who knew too much, the island of lost souls, the munsters, these are the damned