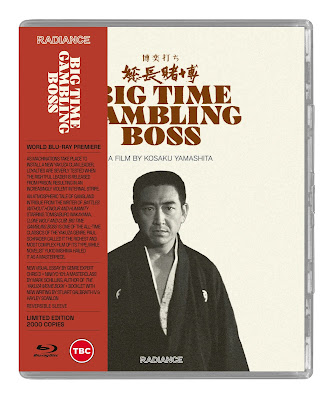 Radiance makes a splash with their first release.

Having had almost no experience with Yakuza films (I'd only seen two up to this point), I'm absolutely convinced Kosaku Yamashita's Big Time Gambling Boss (1968) is THE Japanese Yakuza film to get one interested in the genre. Ridley Scott's Black Rain (1989), even though it co-stars Ken Takakura, one of the primary actors seen in several Yakuza pictures, is a very Americanized preschool introduction to the Yakuza. Takashi Miike's Rainy Dog (1997) is a very Miike-heavy version of a modern Yakuza picture. Big Time Gambling Boss, though, feels like Yakuza 101, and newly-minted Blu-ray label Radiance Films delivers this tension-filled period piece in a stunning package.

Tokyo, 1934. Following the sudden illness of the titular big time gambling boss, representatives from each clan meet to elect a new boss. Nakai (Yakuza film regular Koji Tsuruta) is unanimously chosen but declines because he feels his sworn brother, Matsuda (Tomisaburo Wakayama), deserves the position. Matsuda, though, is serving a three-year prison term, so, against Nakai's protests, Ishido (Hiroshi Nawa) is then chosen as the new leader. Upon his release, Matsuda objects that the title of clan leader hasn't fallen to him or Nakai, so he wages war against Ishida. This starts to break the clan apart, putting Nakai, a born peacekeeper, in the difficult spot of liaison between his sworn brother and the leaders of the clan. Tensions simmer until they boil over in an exciting climax when it's revealed who is really pulling the strings and causing the drama.

Presented in a high definition transfer of the film with an uncompressed mono PCM track and English subtitles, Radiance gives Big Time Gambling Boss its due for its first time ever on Blu-ray. The package, limited to 2,000 units, also includes an extended trailer for the film, a gallery of promotional images, reversible sleeve featuring original and newly-commissioned artwork, a limited edition booklet, and two visual essays. Ninkyo 101 (15m) by author of “The Yakuza Movie Book” Mark Schilling, and is a very good and thorough history of the Yakuza film genre, although his audio quality is less than desirable. The other visual essay, Serial Gambling (25m) by musician and author of the book “Gun and Sword: Encyclopedia of Japanese Gangster Films 1955-1980” Chris D. is one of the best visual essays I've ever seen. With his gruff, avuncular tone, Chris D. expounds upon the history of the Toei studios gambling cycle, and how Big Time Gambling Boss sets the standard for the genre. Bring your pen and paper for both these essays as you'll end up walking away with a list of dozens of films that will jump up the ranks of your watchlist.

The birth of a new Blu-ray label is always exciting because you never know what films will finally be given their rightful places on our shelves. With Francesco Simeoni leading the charge, Radiance has surpassed already-high expectations with their initial release of Big Time Gambling Boss. As a newborn fan of the Yakuza genre, I cannot recommend this release highly enough.