Notes on Film: A Crime-Filled Holiday 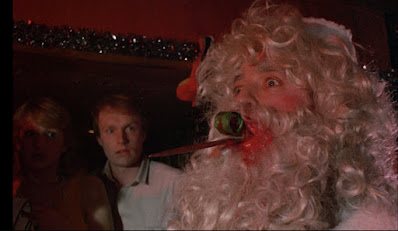 But first a recap. While I’m still gearing up for a year of Neon Badges starting in January, I threw on Don’t Open Till Christmas (1984), a movie that’s been on my NB watchlist for a few years. From one-and-done director (and star) Edmund Purdom, DOTC is a psycho-sexual slasher where the killer is going around slicing and dicing anyone in a Santa costume. It’s not joining the ranks of annual traditional Christmas horrors like Black Christmas (1974) or Christmas Evil (1980), but it’s a fun little London-based slasher worth checking out next holiday season.

A quartet of 1972 crime films filled a day for me last weekend, two of which I’ll be talking about on an upcoming podcast so I won’t regurgitate my thoughts here. Prime Cut stars Lee Marvin as Nick, a mob enforcer sent to Kansas City from Chicago to collect money from the owner of a slaughterhouse who hasn't paid his dues. Gene Hackman is Mary Ann, the owner of the slaughterhouse, and he's also gotten involved in the sex trade, holding women prisoner and then having auctions to sell their bodies. One of the women being held by Mary Ann is Poppy, played by Sissy Spacek in her first movie, whom Nick rescues as a down payment. Hackman has never been slimier and Marvin has never been cooler. In a moment where Nick slaps Mary Ann you can sense the veteran Marvin was possibly putting Hackman in his place, letting him know he was still the big shot around those parts. The tension is palpable between the two characters, the violence is visceral, and it's a wonderful showcase of how crazy us Midwesterners can be.

From the slaughterhouses of the heartland to the mean streets of 1972 Los Angeles, Ivan Dixon's Trouble Man follows another “fixer” of problems for the mob, this time played by Robert Hooks as Mr. T. People are knocking over backdoor gambling dens. Suspecting a rival black gang, Chalky (Paul Winfield) calls in Mr. T to investigate and put an end to the violence. When competing boss Big (Julius Harris) is killed, the two factions all but start a gang war. Mr. T, now playing liaison between the two gangs, takes it upon himself to keep the peace. A prolific television director, Ivan Dixon followed Trouble Man up with his only other theatrical feature, the seminal The Spook Who Sat by the Door (1973), about a black man who infiltrates the CIA in order to gain training to start the new American Revolution. While Spook is a subversive and jarring film acting as a call to action that I would absolutely call a must-watch, Trouble Man is more your entertaining fodder full of exciting shootouts and twists and turns. Add it to your Blaxploitation repertoire and include it next Junesploitation.

With two films remaining in my Years of Lead box set from Arrow, I popped in Colt 38 Special Squad (1976) from director Massimo Dallamano, who did the giallo favorite What Have You Done to Solange? (1972). This time we're in Turin and “the Marsellaise'' has been terrorizing the city. The film opens with a shootout between police led by Inspector Vanni and the gang, ending in the death of the Marsellaise's brother. The Marsellaise gets revenge and kills Vanni's wife. The police set up a special force of cops led by Vanni called, you guessed it, the Colt 38 Special Squad. Made up of Vanni and four other men all armed with the massive titular revolvers, these men are akin to Marion Cobretti and the Zombie Squad. They're tasked with catching domestic terrorists and putting the city's anxiety at ease. Three of the squad members buzz around on dirt bikes which leads to exciting chases through the narrow and circuitous streets of Turin. It's a great cat and mouse movie mixing perfectly the brutality of Like Rabid Dogs (1976) and Savage Three (1975), and the psychological thrill ride of No, the Case Is Happily Resolved (1973). While there are several scenes of bombs exploding in crowded spaces, leaving a trail of dead bodies – which the camera meticulously photographs – the greatest moment comes when Vanni drives a car ON A TRAIN(!!!) and then seamlessly gets back on a road. When people talk about the greatest car stunts, this should be at the top of the list. Again, if this doesn't sell you on the Years of Lead box set, I don't know what will. I suspect I'll be writing about the final film in the set next week.

It's the Christmas season and along with that comes the opportunity to watch movies we normally don't watch at any other time during the year. But lately that's felt like an obligation. I'm the type of person where the decorations usually come down on December 26. I'm usually holly and jolly up through Christmas day, and it's not that I'm NOT holly and jolly this year, it's just that an exploitation bug has been creeping up my back lately. I tweeted earlier this week that I SHOULD watch Ernst Lubitsch's The Shop Around the Corner (1940), but I really wanted to watch Alan Parker's Mississippi Burning (1988). The words of Adam Riske were ringing in my head: “Watch what you want when you want.” There are times when I have to watch certain movies because of podcasts or columns, but during those times when I'm all caught up I still sometimes feel like I HAVE to watch something for one reason or another. I HAVE to catch up on 2022 releases; I HAVE to watch a Christmas movie; I HAVE to watch the thing everyone's talking about. So goddamnit I watched Mississippi Burning, decidedly NOT a Christmas movie, and you know what? I felt great about it. I watched what I wanted simply because I wanted to watch it. 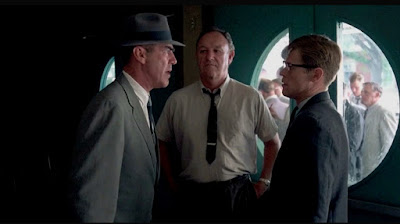 This brings me to another point. Several of my younger years were spent being a contrarian to popular culture and beliefs. Unfortunately, this way of thinking had burrowed so deep within my psyche it still rears its ugly head far too often. Take for instance The Video Archives Podcast. Quentin Tarantino, his movies, and the things he says are a point of contention for so many people, something I either tend to shy away from or am completely oblivious to. This is where my contrarian nature has been gophering lately. Someone says they think he's a genius and I think, “Fuck you, he's a fraud.” Ten minutes later someone could say they think he's an unoriginal loudmouthed thief and I think, “Fuck you, he's a genius.” Therein lay my reluctance to listen to TVA. But that exploitation bug was nagging me saying, “Give it a shot. Just one episode.” And God help me, I liked what I heard. “Watch what you want when you want” had translated to “Listen to what you want when you want.” Do I (or should I) give a shit about what other people think of me if I say, “I watched a non-Christmas movie the week of Christmas,” or “He's annoying sometimes but I like his podcast and his movies''? The answer is a resounding ABSOLUTELY NOT! I write this column and talk on podcasts not to tell you my opinion is the be-all and end-all on certain things. The words I say and write are merely suggestions and recommendations of things we could talk about or movies you could watch.

This relates to my earlier quandary over ranking and rating movies. Do I (or should I) give a shit about whether someone ranks and rates movies? Again, the answer is a resounding ABSOLUTELY NOT! We're here for a very short time and, although it's taken me 40 years, I'm finally becoming ok with letting people have their own opinions. The feelings of obligation when it comes to watching movies or listening to podcasts, whichever way those obligations tend to veer, is not something that should be a part of our lives. You wanna watch Mississippi Burning on Christmas Eve? Do it. It's great!
Posted by Patrick Bromley at 5:00 AM