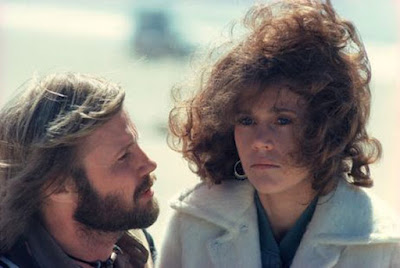 Once again I'm invoking the Brian Saur rule of film discoveries: films watched for the first time that were released before 2000. I watched 536 movies in 2022 that I'd never seen before, plus over 100 short films. Of those 536 discoveries I enjoyed 463 of them. An .863 batting average in baseball is unheard of after a full season, so enjoying 86% of the movies I watched for the first time in a single year is a big win. In alphabetical order, here are 10 of my favorites. This was my first Wenders and, being in Danny Peary's Cult Movies 2, I felt like it was high time to check this one out. The circumstances under which I watched this were peculiar. Having been a victim of the nightmare of the airlines this past summer, we were stranded in Charlotte, NC, for three nights after four flight cancellations. We finally caught a miracle and boarded a plane home. It was late, and since I don't like turning on the overhead lights, reading my book was out of the question. So I flipped open the old MacBook and pushed play on one of the two movies I'd downloaded. The American Friend is such a quiet, liberally-paced, emotional pressure cooker that completely caught me off guard. I expected to enjoy it, but I didn't expect to be moved as much as I was. Maybe it was the flight home, and that could've been part of it. There's no denying, though, this is a brilliant film. Bruno Ganz plays a picture framer who is slowly dying of a rare disease. Dennis Hopper is an art dealer who handles forgeries and sets Ganz up to be a hired killer. A masterpiece of a crime film, it's also a very human story about a man who assumes he has nothing to lose. 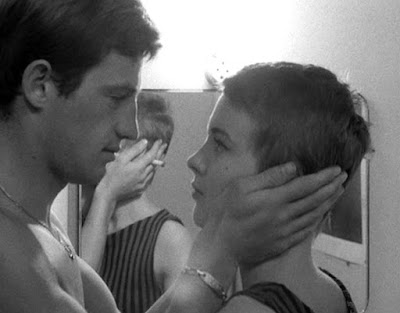 Another entry from Cult Movies 2, Breathless was the first movie I watched for my initial plunge into the French New Wave. I considered putting another FNW film on this list but I simply couldn't settle on just one. Breathless, though, was the one that impacted me the most. From Jean-Paul Belmondo's and Jean Seberg's meet cute on the street while she's hawking newspapers to the completely expected yet nonetheless heartbreaking ending, I was completely transfixed by this film. This was my first Godard of six others I watched. My friend Vinny claims the man has five great films, a handful of good ones, and a slew of terrible films. I plan to find out for myself this year. 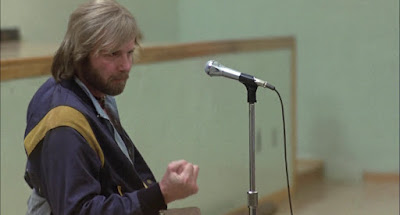 In 2022 I learned about Hal Ashby's life and watched a few more of his films I'd yet to see. Coming Home was a Blu-ray that had been sitting on my shelf for about a year with the plastic still on, so as I approached my Neon Badges on 8 Million Ways to Die, I popped in the film many claim to be his best. I don't know if Coming Home is Ashby’s “best” (there are so many great Ashby films!), but it's the one that hit me the hardest. Bruce Dern is a Marine who heads off to Vietnam. He leaves behind a wife, played by Jane Fonda, who volunteers at the veteran's hospital where she meets Jon Voight, a wheelchair-bound vet, with whom she develops a romantic relationship. Trouble ensues when Dern returns home. This feels like Ahsby's most personal film, putting on full display his feelings about the war. It's a perfect example of showing flawed people while not victimizing, shaming, or blaming them. The final monologue given by Voight to a high school assembly is one of the, if not THE, most heartfelt and moving speeches I've ever heard in my life. 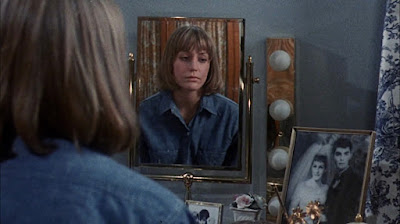 As I'm looking at the poster for this film I'm still peeved Carrie Snodgrass isn't top billed. Not only is she the titular housewife, Snodgrass's performance outshines anyone else in this movie. This is HER film. Snodgrass is Tina, a put-upon and downtrodden wife and mother who is charged with keeping up with the Joneses due to her husband's social ambitions. Richard Benjamin is the overbearing and verbally abusive husband whose main concern is how he looks to his bosses, his colleagues, and his neighbors. One night at a party Tina sees George, a pompous writer, and soon strikes up an affair with him. Frank Langella as George is the most stunningly beautiful man I have ever seen, and I don't blame Tina one iota for getting her some of that. George, though, is also an asshole, so now Tina's stuck between a rock and a hard place. I walked away from this movie despising Benjamin and Langella, meaning they deliver pitch-perfect performances. But it's Snodgrass who is the winner here as an unforgettably depressed woman. Consider this a women's lib movie with a sadly realistic ending. 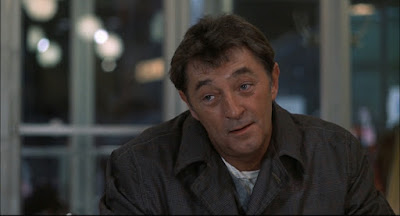 An Anthony movie as they come, I'm almost embarrassed it took me this long to see this film. Toeing the line between cool and pitiful, Robert Mitchum is the titular character, freshly out of prison, and just trying to scrape together a meager life for himself by selling guns to some bank robbers. If there were one perfect movie on this list, this would be it. To me, Mitchum is THE King of Cool. Nobody else can touch him as far as I'm concerned. Yet here he is playing an aging man who's lost all street cred and doesn't know anything in this world but a life of crime. In a career stacked with great performances, this could very well be Mitchum's best. He's surrounded by great character actors like Peter Boyle, Steven Keats, Alex Rocco, and Mitchell Ryan, but they're just the sprinkles on this Robert Mitchum Sundae. 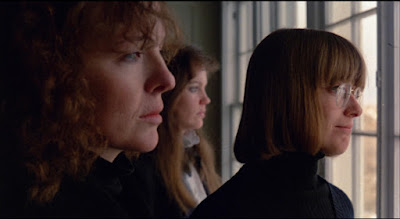 As I wrote about in the fall, I much prefer Woody Allen's dramas to his comedies. Even his dramedies (ie. Hannah and Her Sisters, Alice, Husbands and Wives, etc.). But in Interiors, we have possibly Allen's heaviest movie of his career. I looked as hard as I could and couldn't find a speck of levity in this movie. Geraldine Page and E.G. Marshall are parents to three daughters played by Diane Keaton, Mary Beth Hurt, and Kristin Griffith. Dad is leaving Mom, though, after decades of marriage, to be with Maureen Stapleton. The movie is about the daughters reconciling their feelings about their parents, the divorce, and their father's infidelity, while also balancing their own lives and partners. All the performances are fantastic but it's really the three daughters that steal the show, and witnessing Hurt teetering on the edge of a complete mental breakdown is tragic. This is a Sadvember movie if there ever was one and isn't, as they say, for everyone. But by Job it's for me. 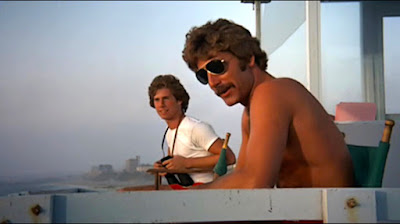 It started as a joke, and then it became one of my favorite movies. The trailer for Lifeguard is a beast unto itself, and the boys from Movies from Hell had lots of fun with it. And then we all watched it and, even though it was full of awe(kward)-inspiring moments, it turned out to be a great fucking movie. Sam Elliott is a 30-something lifeguard in Los Angeles named Rick. Being full of potential, the people in Rick's life never fail to let him know. His parents, his friends, his girlfriends; all think Rick could be doing more with his life. But Rick loves his life. Along comes Kathleen Quinlan, a teenage girl who just moved to the area. She has no friends and hates her parents. But she loves Rick. The movie's reputation says nothing of the power it actually carries. It's not about old men boinking teenagers. It's about identity struggle and how it never goes away. 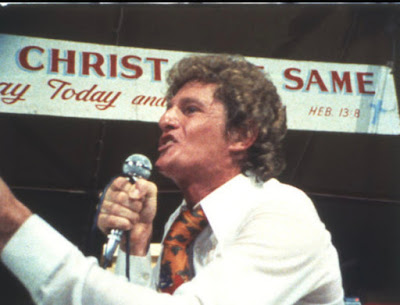 Obviously there had to be a Marjoe movie on my list, and why not the one that kicked off my love for the man and his movies? This documentary is a fascinating, revealing, and condemning look into the tent revival circuit of the Sun/Bible Belt. More than that, though, it's a portrait of a man struggling to find his place in the world. Last year the theme of identity resonated deeply within this writer, and Marjoe is the most moving film about identity I've ever seen. While the filmmakers condemn the hucksterism of the tent revival preachers, they don't necessarily condemn their human subject. As documentarians should, they simply show the man Marjoe Gortner is. And it's this portrait Smith and Kernochan painted that shows how truly charismatic he is and made me fall in love with Marjoe. 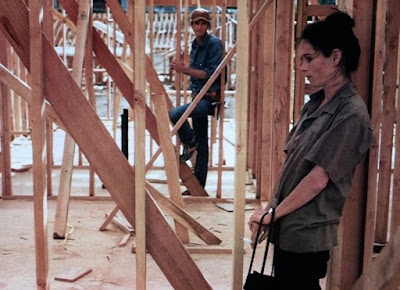 For the longest time this film was impossible to see legally. TCM Underground would play it but they didn't have the rights to put it on the Watch TCM app. I had the great pleasure of meeting and podcasting with former TCMU programmer Millie De Chirico last year, and was privileged enough to receive an advanced copy of the TCM Underground book written by Millie and Quatoyiah Murry. The book covers 50 cult movies, with Remember My Name being one of them. The film is now streaming for free on TubiTV, but Millie's essay on the movie inspired me to seek it out in other ways. Geraldine Chaplin plays a woman recently released from prison and begins stalking Anthony Perkins and his wife. Chaplin gives the most haunting and menacing performance I saw all year. It's in her silence where shivers were sent down my spine and the hairs on the back of my neck stood on end. The endless praise given by Brian and Elric Kane on Pure Cinema Podcast is absolutely deserved, and I'm thrilled it's out there for all to see for now. 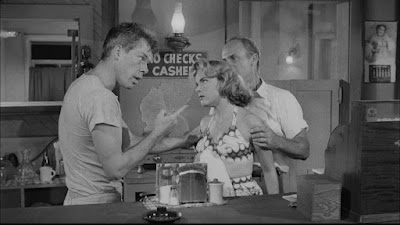 Speaking of the TCMU book, another movie written about by Millie and Quatoyiah snags a spot on my list. Frank Lovejoy plays the lover of Terry Moore who works at a roadside diner owned by Keenan Wynn. Lee Marvin plays the cook who has too much pent up aggression. It's revealed the diner is the sort-of home base for communist spies dealing in nuclear codes. You could consider this a Red Scare movie, and the story is good and thrilling with twists and turns, but it's really a movie chock full of memorable performances. Marvin is such a loose cannon I had no idea what this character was capable of; Lovejoy is mysterious and keeps things so close to the chest I was hypnotized by his storyline; Moore is our heart and soul of the film and we only want good things for and from her; and Wynn, as usual, is so incredibly lovable as the silly patriarchal character. Shack is surprisingly great, and I'm honestly shocked it ended up on my list.
Posted by Patrick Bromley at 5:00 AM