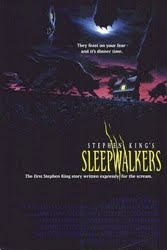 Few authors have had more of their novels, short stories and grocery lists turned into movies as Stephen King. Many of them (most of them?) don't survive the translation to the screen, but they're all worth seeing. No made-for-TV movies, which eliminates about half of the list.

1. Carrie (1976; dir. Brian De Palma) - Not Brian De Palma's best movie (and I love Brian DePalma), but still a pretty terrific Stephen King adaptation and one which legitimized movie versions of the author's work. Three decades of subsequent adaptations would have the opposite effect.

2. The Mist (2007; dir. Frank Darabont) - Frank Darabont's The Majestic didn't work because the director was pretending that he likes people. The Mist is good because it proves that he hates them. The ending is still love-it-or-hate-it (I go back and forth) and works a little too hard to punch you in the dick with IRONY. Still, sweet movie.

3. Dolores Claiborne (1995; dir. Taylor Hackford) - Proof that many of the best Stephen King adaptations are the non-horror movies, the under-seen and underrated Dolores Claiborne rests on the thick, meaty shoulders of Kathy Bates. She's just as good here as in Misery, but the part is less showy.

4. Creepshow (1982; dir. George A. Romero) - Most Stephen King movies are mean and nasty, because that's what a lot of second-rate directors think horror is. At least George Romero (working closely with King) had the good sense to make Creepshow a lot of fun. Not all of the stories are home runs (Stephen King growing moss on himself isn't the best, and either is E.G. Marshall getting covered in roaches), but the movie is pretty great overall and one of the best tributes to E.C. Comics ever made. Even more than the Tales from the Crypt TV show. Boys and ghouls.

5. Sleepwalkers (1992; dir. Mick Garris) - The first Stephen King movie not based on a book or short story by on an original screenplay (or, as the advertising put it, "written expressly for the scream," because BAAAARRRFFFF!!! BBBBBBBBAAAAAAAAAAARRRRRRRFFFFFF!!!!) is all about cat demons and people getting stabbed by corn on the cob. If it knows it's funny, it's not a bad movie. If it's supposed to be taken seriously, it needs to fuck off.

6. Dreamcatcher (2003; dir. Lawrence Kasdan) - Lawrence Kasdan is a good director. William Goldman is a good writer. Thomas Jane, Timothy Olyphant, Jason Lee and Morgan Freeman help make up a good cast. Somehow, though, Dreamcatcher is one of the most unbelievably shitty movies of the 2000s and one of the worst Stephen King adaptations ever made, particularly given its budget and pedigree. You would think a movie about monsters that kill you by bursting out of your butt would be better.

8. Thinner (1996; dir. Tom Holland) - Mean spirited and shitty, Thinner is a good representation of what happens to most of Stephen King's work when translated to film.

9. The Dead Zone (1983; dir. David Cronenberg) - David Cronenberg's most commercial movie also features one of Christopher Walken's most normal performances. It gets branded as a horror movie, but really it's only vaguely supernatural. Very good, despite being the least Cronenbergian and Walkenian film either has made.