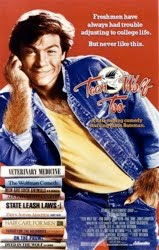 Werewolves are awesome movie monsters, so it makes sense that there would be so few actual good werewolf movies. Time to learn that the hard way. 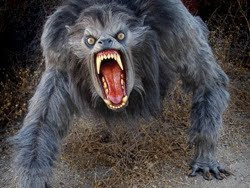 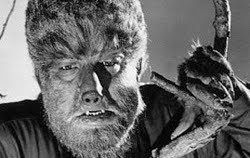 2. The Wolf Man (1941) - The original Universal monster movie remains one of the best, thanks in large part to the iconic makeup, a great cast of character actors and the fact that it fully understands the weight and tragedy of the werewolf. 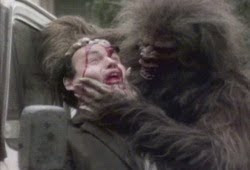 3. Howling II: Your Sister is a Werewolf (1985) - Sometimes, there just aren't words for a movie's shittiness. The sequel to Joe Dante's terrific original features Christopher Lee in New Wave eyewear, Sybil Danning toplessness and a werewolf threesome and is still the fucking worst. The whole thing looks like it was made for the price of compact car. What few effects shots there are are recycled over and over and over again. There are barely any werewolves in the fucking thing; mostly it's just a little bit of hair and some teeth leading up to a monster we never see. The one in the picture below is barely glimpsed, but is still the most complete and elaborate werewolf in the whole movie. It's so not worth the wait. I hate this movie.

4. Bad Moon (1996) - Michael Pare wolfs out and tries to kill Mariel Hemingway's kid, who is also his nephew. It has one AMAZING kill scene but is mostly as forgettable as it sounds. I need to rewatch it. This has the distinction of being one of the only werewolf movies released in the '90s, alongside Wolf and An American Werewolf in Paris. Truly the best decade for werewolf movies. 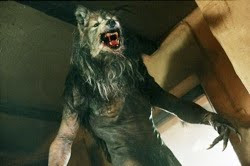 5. Dog Soldiers (2002) - Neil Marshall's debut movie is a little overrated in horror geek circles, but there's still a lot here to like. It's nice to see a movie that has a bunch of werewolves instead of just one, and one which avoids making the monsters CGI even though it came out after 2000. Worth seeking out.

6. Curse of the Werewolf (1961) - Hammer's sole entry into the werewolf genre casts Oliver Reed as a tortured lycanthrope in 18th century Spain, and though it's well acted and features a lot of nice production design, the movie is fucking tedious. It takes half the movie for Reed to even appear on screen, and another half before a werewolf shows up. They should have called it Cameo of the Werewolf.

7. Silver Bullet (1985) - This adaptation of Stephen King's Cycle of the Werewolf is almost universally shit on, but that's unfair. I actually really like the mix of hard monster horror and syrupy nostalgia (it's the only werewolf movie I can think of that ends with a character narrating that she loves Corey Haim). This is one of my favorite werewolf movies, which makes it all the more frustrating that it has one of the worst goddamn excuses for a werewolf ever to hit the screen. Just look at it. Fucking horrible. 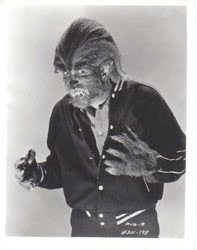 8. I Was a Teenage Werewolf (1957) - Michael Landon stars in the movie that suggests you can make a werewolf through hypnosis. Crazy, man. Crazy. 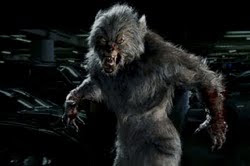 10. Teen Wolf Too (1987) - Wait. Let me get this right. There's another teen wolf? What are the odds? And is that why it says "too" in the title? Because usually in sequels to other movies, they would just say "2" or sometimes "Part II." But here it's "too" instead of "two!" A play on words! I get it! I still want to kill myself.

Posted by Patrick Bromley at 3:49 PM