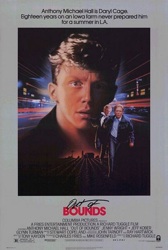 Not all action heroes are created equal.

1. Nicolas Cage - Prior to becoming the go-to action hero for much of the late '90s and 2000s, Nicolas Cage was starring in offbeat comedies, giving bizarre performances in small, eccentric movies and winning Oscars for drinking himself to death. Then The Rock happened, and the world was never the same. His first action movie performance works specifically because he doesn't belong and the film plays on that; unfortunately, he followed it up by getting all big and jacked up and playing a dull hick in Con Air. That was a hit, too, however, and a new action hero was born. Aside from Face/Off (which came out the same year as Con Air), none of Cage's action movie performances have been as fun or interesting as that first one. His whole appeal is that he probably shouldn't be in action movies; why he insists on sleepwalking through a series of uninspired, conventional, disposable efforts is impossible to understand. In the name of Zeus's BUTTHOLE, bring back Stanley Goodspeed.

2. Matt Damon - How Miramax's golden boy of the late '90s became the second-most kick-ass breakout action star of the 2000s (behind The Statham) is something of a mystery. Much of the credit belongs to director Doug Liman, who cast Damon as Jason Bourne, the "thinking man's" action hero who still beats all kinds of ass, in The Bourne Identity. He's all steely focus and intensity, and his fights are short and fast and brutal and, best of all, feel real. 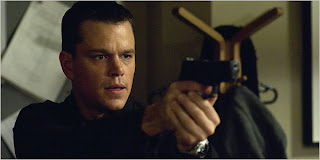 I always thought he was like a Streisand, but he's rocking the shit in this one.

Damon is also a smart enough actor not to completely alter his career trajectory as a result of his success in the genre; he made a trilogy of cool action movies and hasn't really made one since. Green Zone does not count.

3. Anthony Michael Hall - The man who stole our hearts as The Geek in 16 Candles and Brian "PB and J with the crusts cut off" Johnson in The Breakfast Club was looking to break out of his typecast dork roles when he starred in the 1986 action thriller Out of Bounds, but America wasn't ready to accept him as an action star. Can't imagine why. Hall plays the excellently-named Daryl Cage, a small-town farm boy who takes a trip out to L.A. and immediately gets mixed up with drug deals and murder. The most impressive thing about the movie -- besides that it tries to convince us that Anthony Michael Hall could star in action movies -- is the soundtrack, with a score by Stewart Copeland and songs by Siouxsie and the Banshees, The Smiths and Belinda Carlisle.


4. Will Smith - A novelty rap act and goofy sitcom star before Michael Bay got his soulless hands on him, Will Smith became an action star the minute he ran down the streets of Miami, chasing a bad guy with his shirt open: 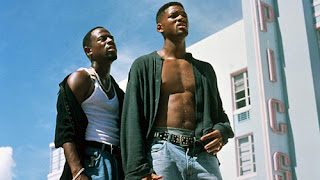 It was as embarrassing then as it is now, but there's no denying that Smith owes his action hero status to the awfulness of Michael Bay (making him the second unlikely action hero credited to Bay, after Nic Cage). And, sure, his Bad Boys co-star Martin Lawrence could have been picked for this list, too, but he's mostly the comic relief. You can tell because he still has to wear a tank top under his open shirt. If Bad Boys had been made as originally planned, it would have starred Dana Carvey and Jon Lovitz. Talk about unlikely action heroes. Acting!

By the time shit got real in Bad Boys II, Smith had finally found a movie in which his insufferable ego matched the slick, soulless bombast on screen. The pupil had become the master. The circle of life. Hakuna Matata. Be our guest.

5. Keenan Ivory Wayans - When Damon Wayans paved the way by starring opposite Bruce Willis in The Last Boy Scout, it only made sense for older brother Keenan to dip his toe into the action movie water by following a similar path, playing comedy relief opposite an established action star -- in this case, Steven Seagal in The Glimmer Man. But second banana wasn't going to cut it for the creator of In Living Color and the director of White Chicks, so in 1997 he wrote his own action movie in which he could star: Most Wanted. He plays a former marine who's set up (by Jon Voight, because OF COURSE) for assassinating the first lady (the wife that changes all the rules). The movie's $11 million box office total pretty much insured that Keenan wasn't cut out for action hero status, which freed him up for the next 10 years to direct a whole bunch of terrible comedies starring his siblings. See also: Marlon Wayans in G.I. Joe: Rise of Cobra.


6. Liam Neeson - Like Bruce Willis and Jason Statham before him, Liam Neeson learned that it only takes one hit action movie to change the entire course of your career. Once 2009's Taken was a massive success and Neeson proved to be an incredibly capable and commanding action hero, the guy who was one-time star of Schindler's List and Michael Collins became the star of Unknown, The A-Team, The Grey and Battleship. Now, it seems like audiences are only interested in Neeson as a kicker of asses -- or, at the very least, a puncher of wolves. There is no greater evidence of his cemented status as an action hero than the fact that he's now starring in Taken 2 (which I'm still advocating be called Still Taken or, at the very least, Taken Too). Once you've got your own action movie franchise, you know you're the real deal.

7. Billy Crystal - Sure, it's more of an action comedy than a straightforward action movie, but 1986's Running Scared still cast Billy Crystal as a Chicago cop, gave him a gun, put him in car chases and let him kill people. And guess what? He's pretty good at it. The movie (directed by Peter Hyams, who would go on to make Timecop and Sudden Death) is still one of the most underrated buddy cop movies of all time and a really good Chicago movie, plus convinced us that Billy Crystal could be a badass -- something Mr. Saturday Night failed to do.


8. John Pankow - Through a series of events that I won't get into here, Mad About You's John Pankow became the hero of a big-budget Hollywood action movie for about 20 minutes in the '80s. Yes, this guy: 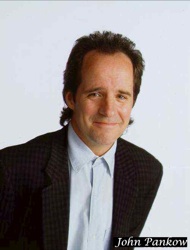 If you haven't already seen William Friedkin's fantastic cop movie To Live and Die in L.A., stop wasting my time. You don't know what you're missing.

9. Bridget Fonda - When recasting Anne Parillaud in Point of No Return, John Badham's 1993 American remake of La Femme Nikita, I can't imagine that sweet, adorable Bridget Fonda was anyone's first choice to play a drug addict-turned-deadly assassin. Casting her against type doesn't even work in a subversive way; she just feels miscast and out of place. The movie's not bad, though -- much better than its reputation suggests.

Yes, Bridget Fonda. I will marry you.

10. Patrick Dempsey - Early on, Patrick Dempsey appeared to be following Anthony Michael Hall's career path: become famous for playing a series of geeky twerps, then try to break out of the mold by appearing in a bad and forgettable action thriller. That makes 1991's Run Patrick Dempsey's Out of Bounds, which is literally the best thing that can be said about it (not fair; I haven't seen it in 20 years, so maybe it's way better than I remember). And that it's one of only a few action movies to ever kill a bad guy by impaling him on a mechanical rabbit. Also, Kelly Preston. Like Out of Bounds, this one has never been released on DVD, but here's the whole movie, if you're interested.


11. Bruce Willis - It's impossible to imagine it now because Bruce Willis and action movies go together like peanut butter and another kind of peanut butter that smirks a lot, but when Bruno was cast in Die Hard back in 1988, it seemed like the craziest idea for an action movie. He was David Addison on Moonlighting. He was funny and he was awesome, but audiences probably didn't picture him swinging from fire hoses and blowing up elevator shafts. And, yet, that unlikely casting created the best action hero of all time in the best action movie of all time. So there. 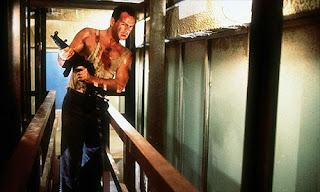 Posted by Patrick Bromley at 12:56 AM