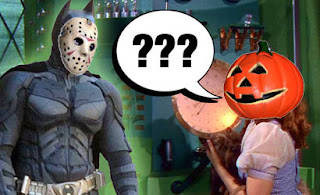 Patrick knows a lot about movies. Doug has seen Vampire in Brooklyn dozens of times. In an effort to expand Doug's cinematic horizons, he'll be asking Patrick questions about movies in a column we're calling "Doug Asks Patrick Questions About Movies."

Why are there so many horror movies? And why are so many of them SO bad?

Horror films are one of the few movie genres that don't require famous actors or respected filmmakers or a big budget. The genre is the star, so there is always an audience for them. And because horror fans are either so devoted to the genre or because they are starved for content, they can be particularly indiscriminate when it comes to what they will watch. Studio and filmmakers have been seizing on this notion for years, recognizing that even if a movie is garbage, there is an audience for it. Why try hard to make something better? What makes this especially frustrating is that every once in a while a really good horror movie comes along but gets lost among all the garbage -- the genre is so disreputable in the mainstream that no one distinguishes between the stuff that's really great and the rest of the nonsense.

What I'm saying is boobs. And blood.

If you had to be killed by any movie monster (not necessarily your favorite monster), which one would it be and why?

Hmmm. This hits me right in the sweet spot, because you know I love getting killed by stuff. Obviously, Freddy Krueger is out, because his kills are long and elaborate and I have to be psychologically tortured first. Plus I have to suffer through those shitty jokes. Cenobites are out because I have no (ok, very little) interest in being skinned alive. I guess Jason Voorhees would be pretty quick, and I most likely wouldn't see it coming (plus there's a good chance I will have just had sex, so that's hard to pass up).

But the real answer is that I would be killed by Pinocchio from 1996's Pinocchio's Revenge. I haven't seen the movie, but F This Movie!'s own Mike has told me that it is a horror movie that contains exactly one kill, in which the murderous Pinocchio doll unplugs someone from life support. THIS IS THE BEST HORROR MOVIE DEATH OF ALL TIME. Quiet. Peaceful. Possibly even dignified -- I can't say for sure, as I haven't seen the movie and don't know the patient's physical state prior to being euthanized by a wooden puppet. But it seems like a decent way to go. And while I can't say for sure if there's an afterlife or not (this isn't "Doug Asks Patrick Questions About His Religious Beliefs"), I would have a great fucking story to tell in Heaven. No one else there will be able to say they were murdered by a fairy tale character. Except the guy who contracted Hep C from Snow White. Poor bastard.

Best ghost movie -- go! I ask this because I know it's probably your least favorite subset in the horror genre.

I'm a big fan of The Innkeepers from earlier this year, because it focuses so much on the two main characters and their relationship. It's the rare horror movie that would be good even if ghosts didn't show up. But the BEST ghost movie of all time would have to be The Shining, a movie I've only come around on in recent years. Though it's not the usual kind of "ghost" movie -- there aren't a bunch of chairs moving or slamming doors or footprints in the floor flour (also the name of my memoir) -- it's definitely a movie about a HAUNTED hotel (also the name of my hotel). You and I have had a few conversations during #ScaryMovieMonth about what's best about horror movies -- scares and atmosphere or characterization and imagination -- and The Shining is one of the few films that gets it all right. It's got something for everyone. Even people that just watch horror movies for blood get ELEVATORS FULL OF IT. I still don't think The Shining is a perfect movie -- Jack Nicholson seems crazy way before actually going crazy -- but movies don't have to be perfect to be great. The Shining is fucking great.

We all know that Mike's favorite "kill" scene is when Jason slams Judy's sleeping bag into a tree several times in Friday the 13th Part VII: The New Blood. What's yours?

See above re: Pinocchio's Revenge.

Well, that all depends on what kind of horror movie you like. JB would say the best decade was from 1931 to 1942, partially because that's the decade that the classic Universal Monster movies were released and partially because JB can't count to 10. There are horror fans who love the wave of gritty, dark stuff that came out in the '70s -- movies like the original Texas Chain Saw Massacre, Last House on the Left and The Hills Have Eyes. I'm partial towards the horror movies of the 1980s, and not just because I'm nostalgic for the decade in which I grew up (though many will dismiss this answer as exactly that). For the first time since the explosion of horror in the '30s and '40s, horror movies really ruled the 1980s, and the sheer volume and variety of efforts led to some really interesting stuff -- as well as some total shit. Mostly total shit.

But the 1980s gave us John Carpenter's The Thing and A Nightmare on Elm Street and Fright Night and Re-Animator and Aliens and both Evil Dead movies and The Shining and Near Dark and Cronenberg's remake of The Fly and An American Werewolf in London and Creepshow and The Howling and Return of the Living Dead and Poltergeist and Hellraiser and Videodrome and those are just SOME of the legitimate classics. There's also a ton of sequels and smaller, oddball movies that came out, too, that are either really good or at least really interesting -- stuff like Psycho II and Halloween III and The Funhouse and Texas Chainsaw Massacre 2 and Dead & Buried and The Burning and Day of the Dead and From Beyond and Henry: Portrait of a Serial Killer and Lady in White and Night of the Creeps and Prince of Darkness and many, many more. All movies worth seeing, and all different from one another. The '80s were the decade in which horror really splintered off into dozens of categories, too, so there was something for everyone, from the more family-friendly horror of Gremlins to the hardcore gore of Lucio Fulci to the endless stupid slasher sequels to the classy A-list stuff. Every audience is served in the '80s.

What I like best about the output from the 1980s is that it brought FUN back to horror movies. The '70s movies have their place (Dawn of the Dead came out that decade after all), but the post-Viet Nam bleakness and grit make them hard for me to revisit. There's still plenty of ugly in the '80s, too, but there's way more levity overall. Horror comedies came back into fashion. Even the straightforward horror movies had a greater sense of fun to them, reminding us that we don't always have to be punished to be scared. Being scared can be fun, too. Thanks, REAGAN.
Posted by Patrick Bromley at 7:31 AM