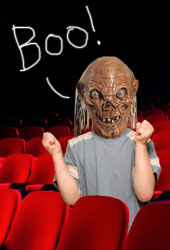 Only 13 more days of #ScaryMovieMonth left! Bittersweet, no? For this second-to-last Friday of October, let's take a look at some ZOMBIE FILMS from the past! Probably one of my personal favorite subgenres of horror, and, yet, there are SO MANY BAD ONES. Even the master himself, Mr. Romero, has laid some mighty big turds. Stop it already, George!

Two quick notes: 1.) If you're planning on attending the MASSACRE at the Portage Theater in Chicago this weekend, stop by and say hi! According to JB, the first 20 fans will get an "F This Movie!" button. And, as we all know, buttons are the currency of the future! 2.) Don't forget to take part in the Scary Movie Challenge III! LET'S CRUSH THIS THING.

Last year, I featured the trailer from Romero's original 1968 film, so this year, I figure, what the heck? Here's a much WORSE version in which all of the thrills and subtlety are spoiled and/or telegraphed. "We're them and they're us," indeed. Directed by award-winning special effects and makeup artist Tom Savini, I GUESS you can say that the effects are "better(?)," but I'll always prefer the classic's stark minimalism. Also, I know this movie got a respectable release, but the preview really makes it feel like a schlocky B horror film. The piercing synth score and cartoonish narration don't help.

I'm including this one just to freak out Patrick. And -- surprise, surprise -- Zelda makes a dramatic appearance! Not cool, Zelda. Not cool. Love these late '80s trailers (not sure if this is theatrical or a preview from a VHS tape), but it's short, and it doesn't give away the whole story. The real Gage, Miko Hughes, is now 26 years old, which means he was THREE YEARS OLD when he made this in 1989. A year later, he taught us all that boys have a penis; girls have a vagina. Thanks Gage!

Considered the first feature-length zombie movie, White Zombie stars Bela Lugosi as "MURDER Legendre" (looking a lot like Count Dracula one year after that film debuted). It's also a "Pre-Code" movie, which means it probably gets away with a lot more suggestion and violence than other, similar horror films that were made only few years later (after uptight censors grabbed Hollywood by the balls). I've never seen it, but I'm sure JB has. JB, is this movie as boring as the trailer makes it seem? I hope not! Because YEEESH this trailer.

Hey! All you nerdy Hobbit fans! Hey! Girl in the back kissing that poster of Frodo Baggins! Hey! You there, dressed like you're and elf (or whatever) from Middle-earth! PETER JACKSON DIRECTED THIS MOVIE FIRST! And it's the best! And by "best," I mean bat-poop crazy! So weird and violent and cartoonishly gory. And SO many great moments, from "I kick ass for the Lord!" and blood-and-ear custard to cutting down a room full of monsters with a lawnmower. Quasi-obsessed with this movie in the mid-1990s, I remember a very special screening in which my friends and I gathered to watch it at my house ... with my mom. F-Heads, if your mom thinks that Dead Alive is a hilarious, ridiculous movie, YOU HAVE A GREAT MOM. Just like me!

This movie makes a lot of peoples' "top zombie films" lists, and I've never seen it. I'm lukewarm towards Quarantine, which is a shot-for-shot American remake. I'm also kind of (read: TOTALLY) burnt out on found-footage/fake-documentary style horror. The preview does not inspire much desire in me to see it, but I trust the Spanish. Always have, always will. I mean, it's just the way I am. Viva la PelÌcula de Terror!

I know some zombie "purists" out there would argue that this isn't, in fact, a zombie movie. After all, the human monsters aren't the reanimated dead; rather, they're infected by a horrible zombie-like disease. To these cynics, I say: dudes, you gots ta get laid! F'real! Calm down, and put your LIFE in perspective. 28 Days Later is great, although (if memory serves) the last half is a bit of a letdown from one of the most powerful, stunning introductions in modern horror history. Kinda drags a bit, no? But, then again, it would be impossible to sustain that level of intensity and creativity for nearly two hours. A pretty bad trailer, but it still makes me pine for the days before Danny Boyle was choreographing the Olympics.

Because we started this set with a remake of George Romero's very first zombie film, it's only fitting that we end with one too -- this time the 2004 remake of the 1978 sequel, which is directed by Zack "Owls of Ga'Hoole" Snyder. Confession: I really, really like this movie. It works for me. And yes, I know it's not BETTER than the original (although I still like it more), and that it's pointed to by a lot of horror snobs as being what's WRONG with modern day scary cinema, and that, yes, all of the character development and social commentary is [sadly] missing. But I don't care! I think it's great (with the exception of a stupid ambiguous/depressing ending that's really unnecessary). And it gave us zombie baby (one of Mike's best Halloween costumes a few years back)! Does any F-Head remember the ad campaign on USA Network promoting this movie? A week before the film was released, they showed the first 10 minutes uninterrupted, uncut and in its entirety! For anyone who saw that (myself and Patrick included), it guaranteed that you would be buying a ticket to the movie. Because HOLY MOLEY. 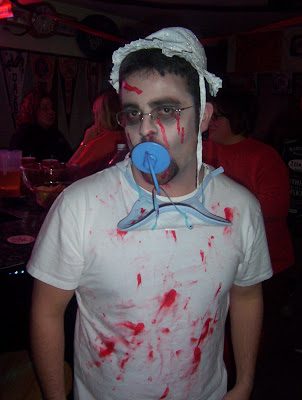 Posted by Patrick Bromley at 6:37 AM