My Favorite Bond: Mark Ahn on The Spy Who Loved Me 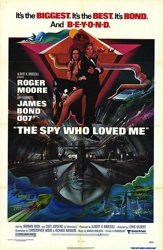 Roger Moore had the hardest job out of everybody.

Sean Connery will always be remembered for being James Bond, and Daniel Craig has captured the public imagination with the current run of Bond films, with Pierce Brosnan generally accepted, Timothy Dalton appreciated but seldom mentioned, and George Lazenby mostly forgotten. Which leaves Moore, whose reception ranges from being considered just as iconic as Connery to being the least-liked Bond.

There are definitely legitimate reasons as to why Moore is received so negatively: Moore looks better in a tuxedo than throwing a punch (more Bruce Wayne than Batman, as my friend puts it), was almost 60 at the end of his tenure, and made some absolute clunkers (Moonraker and Octopussy in particular).

But, the obstacles he had to overcome were the biggest. He had to follow the iconic Connery, whose role was world-building. Not to underestimate this task, but even if Connery had failed, as the pioneer of the role, he and the creators still had the freedom to interpret Ian Fleming’s material to make the character what they wanted. Once the series got going, Connery’s physique, voice, and a slew of wildly popular films created an even larger mountain to climb for whoever followed him. How do you follow or replace something that was working and successful on multiple levels? 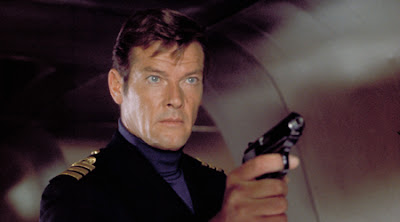 After Lazenby left the series, Moore and the creators had to figure out how to make a Bond that was different but still could sustain the franchise, and he made a choice that perhaps wasn’t the most popular, but he stuck with it; he planted his tongue more firmly in cheek, played with the humor, and twinkled his eyes on camera every chance he got. His Bond was a little more cerebral, a little more sly, and a little more unwilling to leave the casino or the cocktails, as if he wasn’t as interested in mucking it up with the riffraff.

What doesn't change, however, is that my first memories of James Bond (and movies in generally, really) were of Roger Moore. He was the guy in the tuxedo when I got hooked on the car chases, gadgets, and girls while watching the network re-runs on Sunday nights as a kid. I didn’t care about that weird mole that Moore has on his face, or that he wasn’t Connery because I didn’t know who Connery was.

The Spy Who Loved Me is probably the best of the Moore films. It's solid in all of the traditional ways that makes Bond movies enjoyable: a kick-ass opening ski chase, the good guy gadgets (I love that Lotus submarine), bad guy gadgets (Atlantis) and a terrific bad guy in Karl Stromberg (played by Curt Jurgens) who is ostentatiously diabolical. But what makes this movie distinctive from the others comes down to two ingredients: 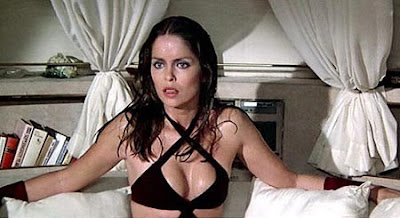 1)  Barbara Bach as Agent Triple X/Major Anya Amasova  In the years after the Moore movies, before the Brosnan era brought about a new Bond, a new M, and a new Moneypenny, there was some discussion about having 007 be a woman. The first female character who could theoretically match Bond’s wits, secret gadgets, and sex appeal was Agent Triple X, the KGB’s top agent (I love the character’s reveal at the beginning of the movie).   Forced into cooperative action with Bond to take down Stromberg, she’s believable as a spy and poking fun of stymying Bond’s advances, although still gets tossed around like a rag-doll in fight sequences. As much as I’d love to say this is a great leap forward for Bond women, the KGB’s top agent is still tied to a chair in a bikini at the end (we don’t get the leap forward into a true female ass-kicking agent until Michelle Yeoh). Although to be fair, Triple X’s appearance also set a precedent for stronger female characters in the films for the rest of Moore’s run (Dr. Holly Goodhead, crossbow-wielding Melina Havelock, Octopussy the crime-boss, and Grace Jones). Despite the silliness, Amasova is good and believable enough that when she threatens to kill Bond for having killed her lover, you believe it. 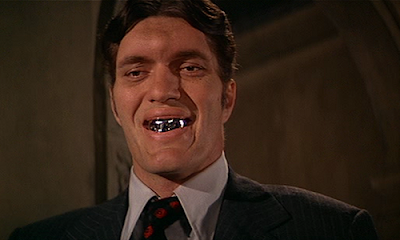 2)  Jaws
Part of what makes Jaws so effective is his simplicity. He never makes a noise, he’s indestructible, he always wears a suit or suspenders, and instead of using guns or knives or something practical for an assassin, he bites you. In the neck. He not only has the strength appropriate to a 7 foot tall killer, but his jaw muscles are strong enough to bite through chains and sharks. Bond might have faced billionaire megalomaniacs, or physically imposing henchmen, but he never faced anyone who represented the physical danger combined with the cunning of Jaws. Did wonders for my childhood fear of vampires. 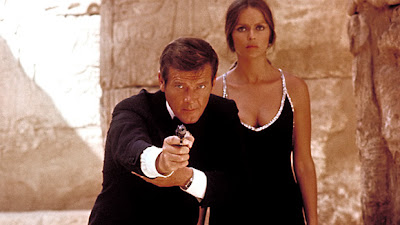 Favorite Bond Theme Song: “View to a Kill” by Duran Duran. It’s a terrible song! But it makes me nostalgic and happy the way that Bond movies from the era do. “Diamonds Are Forever” by Shirley Bassey is also fantastic.

Favorite Bond Girl: Carole Bouquet (Melina Havelock in For Your Eyes Only), Barbara Bach (The Spy Who Loved Me), Claudine Auger (Domino in Thunderball).

Favorite Bond Villain who is not Jaws or Oddjob: Rosa Klebb (From Russia With Love), Mr. Wint and Mr. Kidd (Diamonds Are Forever)

Favorite gadget from Q: Lotus submarine (The Spy Who Loved Me)

Underrated Bond Movie: For Your Eyes Only

Bond Movie I Shouldn't Like But Do: The Man with the Golden Gun

Previously on "My Favorite Bond":
Alex on GoldenEye
JB on Goldfinger
Patrick on On Her Majesty's Secret Service
Posted by Patrick Bromley at 6:45 AM