Heavy Action: Bullet to the Head 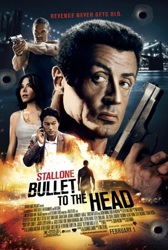 Bullet to the Head is the first collaboration between two titans of '80s action: Sylvester Stallone and Walter Hill. Had it been made in the prime of both men, it might have really been something. This version just came too late. Actually, wait: Stallone has aged just fine into the part. The movie needs 2012 Stallone and 1985 Walter Hill. That's the movie I want to see.

Stallone plays James "Bobo" Bonomo, a New Orleans hitman who is double crossed after killing a dirty cop. His partner is murdered by hulking mercenary Keegan (Jason Momoa), putting Bobo on the path to revenge to find out who set him and take them down. A D.C. cop named Taylor Kwon (Sung Kang) comes to New Orleans to investigate the cop's murder, because they used to work together. He teams up with Bobo, knowing that they have greater likelihood of uncovering the culprits if they work together...but only if they DON'T KILL EACH OTHER FIRST! Because buddy cops. And bullets to the head. And casual racism! And zzzzzzzzzzz.

There's a very obvious structure to this movie, which probably comes from the French graphic novel on which it's based. It's every revenge movie ever made: Bobo and Kwon move up the ladder of bad guys until they get to the top. On paper, it seems like it should work. In practice, though, it just feels repetitive and episodic, maybe because each new encounter with a bad guy (including Brian Van Holt and a dependably slimy Christian Slater, who has found a second career playing characters like this in action movies) offers no new information besides the name of the next guy. Find a guy, kill him. Find a guy, kill him. The stakes never raise. The mystery never deepens. The screenplay should be a tower that builds and builds on top of itself. Instead, it's just a bunch of blocks laying side by side. 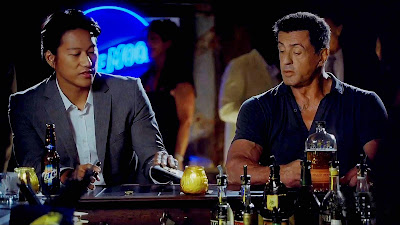 A 66-year old Stallone acquits himself just fine, inasmuch that he commits fully to a character that's not all that interesting to begin with. My problem is more with the character of Bobo himself, who, like Ray Cobretti in Cobra, exists just to be badass and cool in every scene. He's never not cool. He's never not the toughest guy in the room. That kind of sameness is boring, especially when there's an opportunity here to create a character that's more than just "played by Sylvester Stallone." There are a few fleeting moments of humanity that escape, like when Bobo talks about how he knows he did a bad job as a father (oh, right; his daughter, played by tattoo artist played by Sarah Shahi, factors heavily into the movie), or -- my personal favorite -- when he's accused of hating cats and responds with "I don't mind cats. I just don't like dander." That's in the first couple minutes of the movie, and I perked up. Unexpected levity and interesting dialogue? This movie is going to be good!

That was the last such moment in the entire movie.

I'm a big fan of Sung Kang, who plays Stallone's partner; anyone who has heard our podcast on Fast Five knows what a crush I have on his character Han. But he feels miscast here, not just because his laconic energy is totally at odds with Stallone's slurring growl. He makes the stakes feel too low, like he doesn't quite care if he solves the case or not (which, for the record, would actually make for a more interesting movie). The movie also can't decide what motivates the character. What kind of cop is he? Does he really care about following the letter of the law? Because he keeps saying that he does. But then he also willingly teams up with a known killer and continually allows him to murder people. There is the suggestion that he's making an exception to break the case -- that he'll bend the rules as far as he can, but once things are done all the deals are done and all the bad guys (including Bobo) will have to answer for what they have done. This is "suggested" by lines of dialogue that explicitly state as much, because this is that kind of movie. But it never informs the Kwon character. He doesn't exist in a grey area because he's compromising his morals to get the job done. He exists in a grey area because neither the screenwriter nor the actor commit to one or the other.

The best thing about the movie is Jason Momoa, who registers more in his supporting role than in the entirety of the disappointing remake of Conan the Barbarian (he was not what was wrong with that movie; a bad script and Marcus Nispel are what was wrong with that movie). He's about the only thing that pops off of Bullet to the Head, and really deserves to become an action star based on his work here. I always liked him on Stargate Atlantis (Ronan Dex represent!), though that was more for his character and his physical presence than for his performance -- he was the muscle, the badass, the Chewbacca. He was great on Game of Thrones (Khal Drogo represent!) because he was a monster -- a terrifying presence of muscle and eyeliner and Golden Crowns. But in Bullet to the Head, he finally gets to be a physical presence and act. He gets a speech near the end of the movie that's cynical and outlines his entire worldview (the one that's constantly being alluded to by the other characters, who keep referring to Keegan's Code [I would see a movie called Keegan's Code]) right before he takes part in a brutal axe fight. It's the best acting in the movie. Someone find Momoa the right action vehicle soon, please. 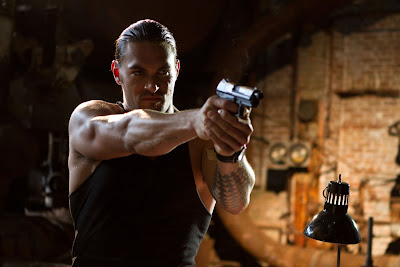 So while this is the first theatrically-released, non-franchise Stallone action movie since Get Carter in 2000 (an underrated movie that I like more than this one), the story here isn't Stallone's comeback -- that happened years ago with the one-two success of Rocky Balboa and Rambo, not to mention both Expendables movies. The big story here is the return of director Walter Hill, director of The Warriors and Red Heat and the great Streets of Fire, who hasn't made a movie since the prison boxing movie Undisputed in 2002. And as Walter Hill's comeback movie, Bullet in the Head is a big disappointment. Yes, the signifiers of a Walter Hill movie are in place: brutal violence, lots of tough guy dialogue, nonstop blues guitar and harmonica on the soundtrack. It all adds up to something that doesn't feel so much like an imitation as it does the work of a guy who no longer has it.

That's probably not fair, as the movie underwent a lot of problems -- its release was pushed back almost a full year, for starters -- and I think Hill lost some of the control of the movie (I don't have that confirmed, because who the fuck do I know that would confirm it?), which might explain some of the sloppiness. Hill is a director famous for his clean, no-nonsense action, but here appears to be copying the Paul Greenrass-Bourne style of action, with lots of shaky camera and too much of the fighting staged in close-up. That's disappointing. Some of the action is shot well -- the climactic axe fight works, largely because it is an AXE FIGHT between two guys with at least a 16 inch height difference between them -- but much of it is the kind of photography that manufactures business and chaos by making sure the audience can't follow what's going on. Hill, who once upon a time basically invented the buddy cop action movie with 48 Hrs. (and then did it again in Red Heat, which is by no means great but is more than passable), tries to repeat some of that success here with far, far inferior results. The circumstances that force Kwon and Bobo together are thin at best, and the racial barbs that Bobo casually throws out ("Why don't you read some fucking TEA LEAVES?") feel forced -- weak reminders of the genuine racial tension between Nick Nolte and Eddie Murphy. It's a guy trying to play his greatest hits when he can't remember the words to the songs.

Bullet to the Head was originally going to be directed by Wayne Kramer, who made the COMPLETELY CRAZY Running Scared with Paul Walker a few years ago, but he quit the movie after disagreeing with Stallone about the tone. Sung Kang was brought in by Joel Silver (replacing Thomas Jane, who would have fit much better in the Walter Hill universe) to give the movie more "global" appeal. I'm all for Sung Kang getting more work, but thinking like that is eroding the quality of movies. It's purely a business decision, not an artistic one, and doesn't take into account whether or not Kang is even right for the movie. He's not. I like him as an actor. I like diversity in movies, especially action movies. I'm not advocating for the all-white pairing of Stallone and Tom Jane because of the actors' race. I just think that cast might have eradicated some of this movie's problems. 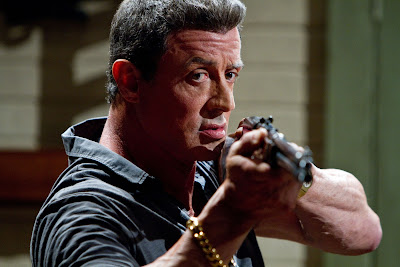 And, just like The Last Stand a few weeks ago, Bullet to the Head absolutely DIED at the box office (it was Stallone's lowest opening since Nighthawks in 1981, grossing less in its first weekend than Stop! Or My Mom Will Shoot and Assassins), which is just further proof that audiences aren't interested in old-school action movies -- even messy, problematic ones like this -- unless it's The Expendables. I can't quite wrap my head around that. The whole thing that people seem to respond to in The Expendables is the '80s throwback vibe, but either they'll only accept it in large doses (six different '80s stars instead of just one) or they're just enjoying it ironically. As a fan of Heavy Action, either answer is disappointing to me. Every time a movie like this shits the bed financially, there's less and less of a chance of another one getting made. Studios won't bankroll a solo Stallone or Schwarzenegger action movie. Walter Hill won't get another job. The kind of movie that Bullet in the Head is at least attempting to be will continue to be resigned to the DTV ghetto, where some of the best and most interesting action movies are made but never recognized because they sit alongside so much crap. Bullet in the Head is not great. It's not even very good. But I'm sad at the thought that this kind of movie will go away. I'm not ready yet.

Come on, The Tomb. There's a lot riding on you.
Posted by Patrick Bromley at 7:17 AM