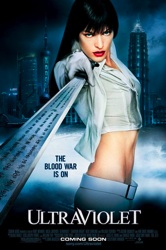 This is the kind of movie that makes me ashamed to be a nerd.

As if to prove there could be a fanboy property worse than both the Resident Evil and Underworld series, writer/director Kurt Wimmer gifted the world with the 2006 sci-fi disaster Ultraviolet, a film that traffics in all of the worst instincts of the genre. Like all bad science fiction, this one has developed a cult following, because many of us are desperate to claim a property as our own. Well, those people can have Ultraviolet.

The year is 2078. A virus has spread to a huge percentage of the Earth's population that transforms them into daywalking vampires called hemophages, leading the Archministry and Vice-Cardinal Ferdinand Daxus to take control of the government and begin rounding up hemophages to be exterminated. Enter Violet Song (Milla Jovovich), a hemophage and a member of the secret underground resistance, who decides to steal a weapon designed to kill off all the remaining vampires. The weapon turns out to be a young boy named Six (professional creepy kid Cameron Bright), whose true identity reveals bigger secrets and poses a greater threat than anyone originally predicted.


I've only covered about half of Ultraviolet's plot, partly because I don't want to give too much away (God forbid Ultraviolet be ruined by anything other than Ultraviolet), but also because my eyes glaze over typing words like "Archministry" and "Vice-Cardinal" and "Hemophage." Shit like this gives science-fiction a bad name -- not because the words are inaccessible (they are), but because there is no meaning behind them. Why is Daxus (ugh) the "Vice-Cardinal?" What has changed in the future that allows for the creation of such a position and why? They're generic, interchangeable terms, dropped in to sound "different" enough to suggest it's THE FUTURE without giving any of it context. When people want to dismiss the genre, it's too easy to point to Ultraviolet and make them think they're right. And in this case, they kind of are. 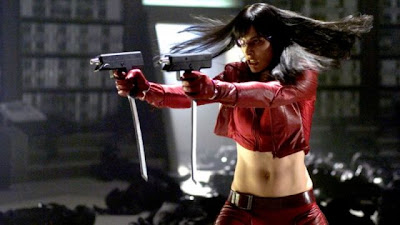 You know that person in your life who wants to make it big with his or her band? The one who spends all kinds of time creating album cover art and writing out all the linear notes but never gets around to writing a good song? That's Ultraviolet. Kurt Wimmer focuses so much on his "world building" and his costume design and the film's mythology that he ignores the fact that the movie has no story. First and foremost, that's what any movie needs. The rest is just coolness gravy. Ultraviolet is all coolness gravy, only none of it is cool. The script reads like a checklist of genre cliches: Dystopia. Hot chick. Vampires. Clones. Swords. Guns. It's fanboy Mad-Libs, and it's proof that "cool" elements do not a movie make.

I remember seeing the poster for Ultraviolet a few weeks before the movie was released in 2006, and being struck by its tagline: "The Blood War is on." What occurred to me was how meaningless that sentence is as a way of selling a movie. We don't know what The Blood War is. It is not a thing. Ultraviolet is not a thing. That's an idea for a sequel, wherein you spend a bunch of the first movie talking about the "coming Blood War," and then IF your movie is a hit, you make a sequel in which the fans FINALLY get to SEE THE BLOOD WAR. You don't start out by telling us that there is a Blood War on and expect us to give a shit.

Oh, also, there is no Blood War in Ultraviolet. So I'm not sure what it being "on" means, because "on" doesn't seem to mean "taking place."

For all of its would-be coolness -- and between its guns and its slow-mo and its techno score and Milla Jovovich's parade of wigs, the movie is nothing if not DESPERATE to be cool -- most of Ultraviolet plays like the world's shittiest green screen demo reel. The movie is wall to wall visual effects, and while I know technology has come a long way since 2006, they are shockingly bad. The action is also badly staged, and even though Jovovich is capable of being convincingly badass, the movie is edited in such a way that disguises anything she pulls off. It's so over-cut that it either obscures the action or it becomes the focal point of the scene: think what Violet is doing is cool? That's NOTHING compared to the way we're filming her! Also, the movie is shot through a series of filters, leaving every actor looking like a pinkish smear. I know, I know. The future.

Reportedly, Wimmer was locked out of the editing room by the studio, meaning the version we got isn't technically his cut. That sucks for sure, and has rarely ever resulted in a "better" movie than we might get if the filmmaker is allowed to execute his or her vision. At the same time, there's nothing that remains in this iteration of Ultraviolet to suggest that there is a good movie buried anywhere in here, making it impossible to conceive of a world in which Wimmer's intended cut of the film works. Studio interference or not, Ultraviolet was always going to be terrible. 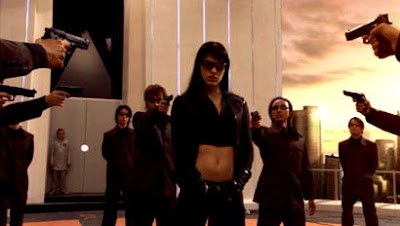 Kurt Wimmer is something of a cult hero for some unknowable reason, seeing as he has never actually made anything that's any good. A lot of people like Equilibrium. On that, we will have to agree to disagree. That movie has almost all of the same problems as Ultraviolet, boasting a slightly cooler idea (emotion has been OUTLAWED!) but losing Milla Jovovich's midriff in the process. Otherwise, Wimmer is the writer of junk like Law Abiding Citizen and Sphere and Salt and last summer's remake of Total Recall. He's the kind of filmmaker for whom his fans are constantly apologizing -- "You should see what he COULD do if given the chance." I am less interested in what a filmmaker may or may not do in the future than I am in what movies he or she has already made. A bad bird in the bad hand is worth two in the bad bush.

I did not have high hopes for Ultraviolet. I know that it basically bombed in theaters. I'm aware of the movie's reputation. But even some bad science fiction movies can have good things in them; Aeon Flux, a similar movie released just one year earlier (Charlize Theron plays the Milla Jovovich part) has things to like in it. What I did not expect was for the movie to be so crazy boring. At least Equilibrium is very watchable -- downright entertaining -- in all of its straight-faced silliness. Ultraviolet could have used something as crazy and stupid as "gun-kata." At least that would have been something.

The blood war is on.
Posted by Patrick Bromley at 6:21 AM